Why We Trail America in Jobs Growth

In 21 of the last 23 months we have trailed the nation. Walker’s policies get much of the blame. 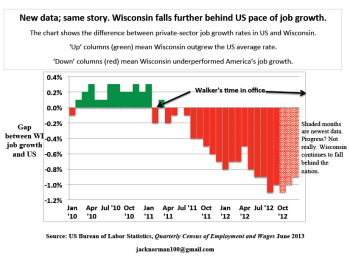 The newest jobs numbers are not the good news for Wisconsin some would have us believe. Yes, Wisconsin dropped from 44th worst in job growth to 33rd worst.

But what that “good news” means is that we’re not falling behind the nation quite as rapidly as we once were. Wisconsin is still missing out on the national recovery. And our governor’s policies are largely to blame.

Look at the chart that goes with this article. It shows, on a monthly basis, the gap between the rate of job growth in Wisconsin and in the nation. The downward columns, in red, are bad because they mean Wisconsin fell behind the national recovery.

At the far right, three shaded lines show the newest quarterly jobs data from the US Bureau of Labor Statistics. In the last quarter of 2012 (the newest data), Wisconsin gained nearly 2,000 jobs, an increase of about 0.1 percent. But nationally, the jobs growth rate was 0.8 percent, or eight times higher than in Wisconsin.

Since Scott Walker took office, Wisconsin has been growing jobs at little more than half the national average: jobs in this state have grown about 1.0 percent a year, compared to 1.7 percent per year nationally. If we’d have matched America’s pace, there’d be about 40,000 more employed Wisconsinites.

As the chart also shows, before Walker took office Wisconsin was growing at or slightly above the national rate. Since his inauguration, we’ve fallen well behind. The new numbers show we’re still falling behind, just at a slightly slower rate.

Sports-analogy alert: At the end of the first quarter in a football game you trail by seven points, a touchdown. At the end of quarter two you trail by 14 points, two touchdowns. In the third quarter you give up only a field goal, so you trail by 17 points. Are you cheering because you only fell behind by three more points instead of seven?

The facts are clear: during Walker’s time in office, Wisconsin has missed out on much of the national economic recovery. But is this the governor’s fault? How could he have so much impact? Couldn’t it be coincidence?

First, it’s worth noting that many decisions of the past, by Democrats as well as Republicans and private sector leaders, could contribute to the state’s lagging economy. But here are three examples of how Walker’s policies have thwarted jobs recovery.

One: the train jobs that aren’t. A new rail terminal in Madison and high-speed tracks the federal government wanted to pay for were supposed to open this summer. A factory in Milwaukee was supposed to be busy making railroad cars for the nation. But Walker turned down the federal money, train manufacturer Talgo Inc. closed its new factory (and is suing the state), and Wisconsin lost good jobs.

Two: the public sector jobs that aren’t. In Walker’s first year in office, 15,500 jobs in state and local government were lost due to his cutbacks. It was the second-largest reduction in public sector jobs in the US in 2011, in percentage terms, according to Bureau of Labor Statistics data.

Three: the billion-dollar pay cuts. Public sector workers who kept their jobs lost about eight percent of their take-home pay. These are middle class workers who were previously spending this money at restaurants, grocery and hardware stores, dentists and local contractors. That’s nearly a billion dollars a year in lost spending that would have been circulating through the state economy.

From a macroeconomics point of view, all three mechanisms are job killers. You may like Walker’s ideology. But you should also accept the fact that implementing it has come with a very heavy cost.

Walker’s defenders have one last argument: There was no alternative open to him, other than raising taxes. Well, he should have raised taxes some on those who prospered the most over the past decade. It’s what Congress did for the nation, and that hasn’t harmed America’s economy.

Wisconsin needed a stimulus. The governor fed us a sedative instead.

14 thoughts on “Why We Trail America in Jobs Growth”