From vintage collectables to bizarrely charming junk, this Third Ward shop has something for everyone. 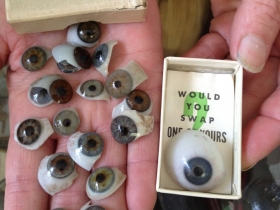 Rudig shows off her collection of glass eyes. Photo by Joe Horning.

There aren’t many stores where the owner will gladly pull out her collection of glass eyes to show off to customers. But this is not exactly your average shop. In a neighborhood with so much to do, Hoarder’s World on Broadway only adds to the unique atmosphere of the Third Ward.

Toni Rudig, who opened the vintage gift shop about seven years ago, said she truly enjoys her work. She loves walking customers through the shop and answering questions. Many items in the store have a unique story.

“There was this time I bought out a business, which contained much of the property of a Polish man named Yacik Sito,” says Rudig. “He had some fascinating items in that collection. A lot of it was his grandmother’s, who was a prisoner in Auschwitz. One item that really stuck with me was an old blanket she owned while she was there. It is just amazing, some of the things we get. I love telling people about the history of these collectables.”

Another item she mentions is a sword she bought in its sheath for $45, the price including a box full of Barbie dolls. She had the sword appraised and it was worth over $10,000.

The building the store occupies, at the corner of Broadway and Chicago, is owned by Toni and her husband Dave Rudig, who runs Paintball Dave’s around the corner. They have owned the building for more than 30 years. Back then, Dave’s was one of the only businesses in the area, long before the Third Ward’s renaissance.

“Back then, it was a little scary to walk to my car. But the entire neighborhood has really grown into a close-knit community,” Toni Rudig says.

Many items at her shop were originally bought from estate sales by Toni’s brother. One way or the other, some very odd items pass through the shop. Last year, they acquired a life-size statue of Jedi Master Yoda from “Star Wars,” which sat outside their shop all summer. Rudig wanted to keep it as a decoration. But one day a customer came in offering $1,000, so Yoda was sold. 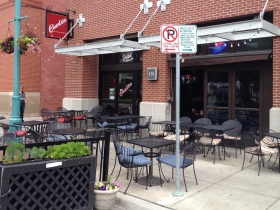 Of course, on the very top floor, a Spider Man statue awaits someone to buy him. Photo by Joe Horning.

Some customers are people who happened to be passing by and were lured by the windows packed full of various trinkets. Once inside, they can explore three full floors of anything from wooden furniture to old European beer glasses to troll dolls. Tucked away on the top floor, there is even a Spider Man statue.

Rachel Buth, who works in the Third Ward, has stopped at the store at least once a month over the last two years. “It all started when some friends and I walked by, and stopped to check it out. It is an interesting place. Today I bought a pocket knife and this beautiful little coin purse,” she says.

Toni says many customers stop in because their friend found something so unique and they had to come and explore for themselves. Two groups of reliable customers, she adds, are Chicagoans and students. “We get a lot of students. Sometimes they buy uniforms, posters, or something else to use in a project. A lot of times they come in to buy old comics or records, which are pretty cheap.”

Toni and her husband are also auctioneers, which is one way they collect items in the shop. They also go to household estate sales, going-out-of-business sales, and warehouse sales to find things. People even pull up to the shop with trucks and offload things they want to sell; one woman stopped by with a U-Haul, offering to sell everything of hers before she moved to Arizona.

Hoarder’s World keeps up good relations with other antique and collectible stores. Toni will check other stores and see if there’s something she can buy that Hoarder’s World does not have. Other store owners will do the same, searching through Hoarder’s World for potential inventory.

Recently, Toni was in Dallas for a show. While there, she visited many collectors and shops, buying up anything she could find that was interesting. When she arrived back in Milwaukee, her car was packed to the tops of the windows with items.

Many collectors, dealers, and interior decorators come to Hoarder’s World because they can get good prices. “I price to sell,” says Toni. “Or else this place would become a museum. I get a lot of collectors who come in because I price better than most of their suppliers.”

Toni and her husband are lifelong metro residents. Both grew up in Wauwatosa and have known each other since their middle school days at Longfellow Middle School. In 1988, they opened up Paintball Daves.

How did she choose the name “Hoarder’s World”? Toni says it reflects the lifestyle of her and Jim, who have been collecting things their entire lives. A couple of times, they’ve even bought out the homes of actual hoarders. “The first house, it took about four hours to get into the front door. Once we got inside, it was just amazing what we saw. It is scary. They did not throw anything out. And in his backyard he had a bunch of unopened packages.”

The result was lots more items for her shop. In the toney Third Ward, says Buth, the shop really stands out: “You have all these really swanky places, then there is this shop that sells just about anything you can think of.” 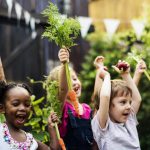