The Hangout Gets Real

The Young Professionals event at City Hall triggers some discussion of race in Milwaukee.

“Instead of trying to tackle all of the big issues in one hour, the panel will focus on numerous smaller ideas. The discussion will be centered around the day’s theme of sustainability, both environmental and economic.” That’s how Urban Milwaukee president Jeramey Jannene, who served as moderator, introduced the panel discussion at  Monday’s YP Week event, The Hangout. But when you put a panel of Milwaukeeans together you never know what will happen. Panel members Matt Wild, Fernando Reyes, Judge Derek Mosley, Jason Korb, Rick Barrett, Anna-Marie Opgenorth and Vanessa Allen took the topic and discussed everything from energy efficiency to where to find good soul food in Milwaukee.

Mosley offered the soul food tip, recommending Mr. Perkins. On the topic of sustainability, he also noted that the Milwaukee Municipal Court has saved millions of dollars annually by going paperless. Opgenorth told us that 40 percent of Milwaukee’s housing stock was built prior to World War II, and just 10 percent since 1980. Barrett predicted that his Moderne development, because it’s made of concrete, “will keep giving back for 200 years.” He also noted that the residents in the new tower are about half white and half black, something he never expected but was proud to note, he added.

Barrett’s comment came after Mosley frankly addressed the issue of race,  an issue that often shuts down many discussions in Milwaukee. Mosley noted that he had 4,000 Facebook friends, half black and half white, and nobody from one race had friends in the other. His point drove home what is often left out of the larger discussion of  sustainability, the people. A complete discussion of sustainability must not simply take into account planet and profit, but the entire triple bottom line of people, planet, and profit.

The message for Milwaukee? To become a sustainable city we must start by bridging our divisions and building on our diversity. 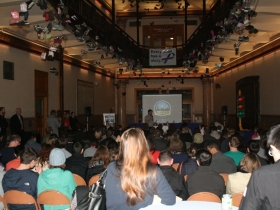 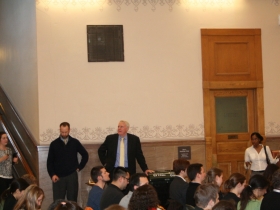 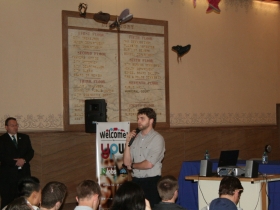 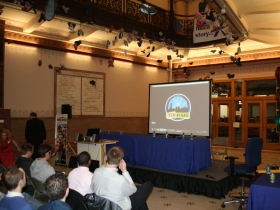 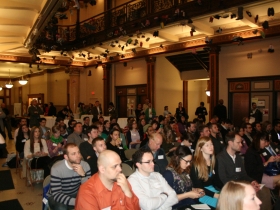 13 thoughts on “Photo Gallery: The Hangout Gets Real”