Their new place in the Public Market offers fresh produce, wood-fired pizzas and an intimate bar. 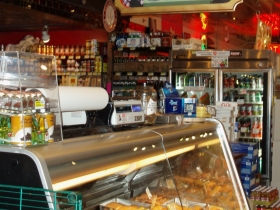 It’s almost a market within a market. Nehring’s Family Market opened at the Third Ward’s Public Market in November to an appreciative clientele. Then, in March, it expanded by adding what it calls “Commission Row Produce,” located just across the aisle from its Family Market. The addition of fresh produce makes Nehring’s more of a “real market,” says Rachel Dejno, front end manager. “The owners wanted to create a market much like the original Groppi’s, and the Sendik’s on Oakland,” Dejno said. With an incredibly broad range of offerings, whether it’s dry goods, fresh produce, deli items, hot meals to take home or enjoy with a drink in the intimate bar, or pizzas made to order in the wood-fired oven, Nehring’s Family Market has successfully filled a gap at the Public Market.

Anne and John Nehring began making their mark in Milwaukee when they bought out the original owners of Sendik’s on Oakland. They followed that by buying Groppi’s in Bay View and then established V. Richards in Brookfield. The Public Market location was a logical next step, creating an outlet for the type of high-quality grocery and deli items the Nehrings had become known for, in a location – just north of the historic “Commission Row” from which they often bought produce– that brings their retail outlets full circle.

Each of the outlets owned and operated by the Nehrings reflects their desire to not only give their customers quality food products, staying current with trends and popular favorites, but to retain some of the down-home, intimate, neighborhood feel of the small, ethnic grocery stores that once graced the corners of many Milwaukee neighborhoods. 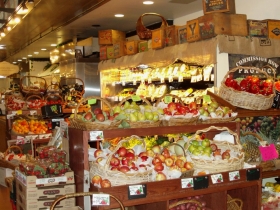 Commission Row Produce harkens back to the days of the stalls that lined the block of Broadway just to the south of the Public Market. Photo by Peggy Schulz.

Deli salads and hot case items at the new Family Market are prepared at either Groppi’s or Sendik’s on Oakland, both of which have much bigger kitchens. A stand-out feature at the Family Market is the 7,000-pound, wood-fired stove, used primarily for pizzas, but also to crisp-up a customer’s focaccia sandwich, if desired. With the addition of Commission Row Produce, the bartender at the Family Market now can easily replenish her fresh lime supply.

The bar offers a nice touch. If you get thirsty while perusing the shelves and display cases packed with dry pasta, truffle oil, pasta sauces, arancini (stuffed Sicilian rice balls), imported Italian cheeses, 15 different olives and olive salads, or link sausages made fresh each day, you can hit the bar for one of the unique cocktail offerings. The KK Old Fashioned and the Bayview Manhattan are popular, but you might want to experiment with the Negroni, a “classic Italian cocktail” with origins in Florence, that is aged in an oak barrel. Beers available on tap come from a variety of fairly exotic locations, including Cremona, Italy and Amherst, Wisconsin. Or, chill out for a minute in the walk-in cooler, where European style butter and tapenades might catch your eye, along with fresh pasta.

One of the hot items recently added to the already attractive menu is the Friday Chicken Fry, “a new Wisconsin tradition.” It consists of buttermilk-marinated chicken along with the Nehring’s already much-in-demand frites. Local connections pop up in a number of places in the relatively small space occupied by Nehring’s Family Market. Bolzano Artisan Meats, from the company based in Riverwest, are offered in the deli case, along with Underground Meats out of Madison. The cooler on the north wall contains Purple Door Ice Cream, from its source in Walker’s Point. All of the bread items come from Breadsmith, a Whitefish Bay based company that now has franchises in several states. 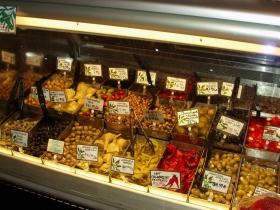 Olive fanciers might have a difficult time choosing just one selection from the deli case. Photo by Peggy Schulz.

One of the most exotic – and expensive – items at Nehring’s Family Market is Jamón Ibérico. Described as “the rarest of the rare,” it’s a delicacy imported from Spain. This jamón, or ham, comes from renowned black pigs in Spain, fed only acorns. A leg of Jamón Ibérico can be seen in the deli case, near other imported meats and sausages. True connoisseurs won’t mind paying the $129 per pound price!

The shelves at Commission Row Produce, like those at the Family Market, offer a range of visual delights. Asparagus, heirloom tomatoes and a rainbow of peppers call out to potential customers passing by. In a further example of interconnectedness, beyond the naming of the produce stall, it fills part of the space in the Public Market once taken up by Breadsmith, a key supplier of Nehring’s.