Just opened in November, the Third Ward shop has already become a favorite for chocolate lovers. 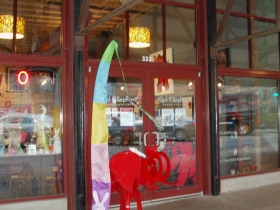 Red Elephant Chocolate opened its Third Ward café a little over four months ago. In that short time, it’s become known as a source of high-quality chocolate items and a place to stop for coffee and dessert after dinner or a show. Looking just a bit deeper, Red Elephant Chocolate also is an attractive amalgamation of things old and new.

The “chocolate experience you’ll never forget” – Red Elephant’s trademarked slogan – is available at two cafés, 333 N. Broadway, just south of the Public Market, and at the on-line cloud café at RedElephantChocolate.com. The Broadway St. location occupies part of a vintage “Commission Row” building, with the original Cream City brick lovingly restored under the high, beamed ceiling. A metal canopy outside, dating back to the old days, helps shield the chocolate treasures inside from the morning sun, just as it protected the fresh produce from the elements years ago. Sitting unobtrusively over the glass display cases is the “register” in the form of an iPad.

The store’s offerings run the gamut from childhood favorites, such as solid chocolate bunnies for Easter, to the trendy, in the form of gourmet truffles, seemingly too jewel-like to be edible. But, don’t let their shiny, colored surfaces stop you from savoring the multiple layers of complex flavor inside. Sea salt caramels are “really hot right now,” according to Donnavan Swirth, one of Red Elephant’s three shift managers. Formerly bought from an outside vendor, Red Elephant has transitioned to making its sea salt caramels on-site. The Red Elephant twist is to add flavoring to the sea salt atop the caramels that matches the flavoring inside, including raspberry and orange. Another of Red Elephant’s unique items is the chocolate cream puff, the whipped cream for which is made fresh, in-house, every morning.

Red Elephant Chocolate has several connections to the former Quality Candy Company, a Milwaukee fixture for nearly 100 years before it declared bankruptcy in the latter part of the preceding decade. Red Elephant’s owner Richard Koenings was one of a group who bought the Quality Candy/Buddy Squirrel franchise after the bankruptcy. Koenings eventually sold out his portion of the company that now is known simply as Buddy Squirrel. 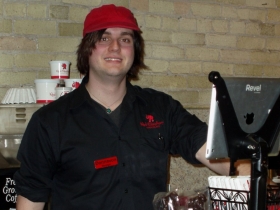 Swirth, the shift manager, brings to the company his experience as one of the assistant managers of the kitchen store connected to the former Quality Candy factory. And Swirth’s mother, Elisabeth, is Red Elephant’s Retail Operations Manager, and was a manager at Quality Candy.

Red Elephant opened the week of Thanksgiving last year, just in time to attract Christmas shoppers in the Third Ward. It’s proved to be a popular spot for high-traffic Gallery Nights, too, when customers are offered new products to test. For Mother’s Day, several new truffle varieties will be available.

Donnavan Swirth enjoys his role at Red Elephant. “It’s fun to work in this area. I tell our story to guests, and they tell me about the Third Ward,” he says. “It’s a give and take.” Swirth and all of the store’s sales floor employees had to attend “chocolate school” before they could begin working at Red Elephant. They gained extensive knowledge of both chocolate and elephants, according to Swirth.

In designing not just the concept but also the décor of Red Elephant Chocolate, Koenings was going for something simple, comfortable and upscale, Swirth says. The name, Red Elephant, was chosen as yet another mingling of the old and the new, the current and the classic. Red is the color of the two most chocolate of holidays, Christmas and Valentine’s Day, as the store’s promotional material explains. And elephants? Well, they’re a symbol of warmth and togetherness, but more importantly, convey a sense of history and mystery. Cocoa, the store’s mascot, is embodied in a metal sculpture that sits just outside the front door. It’s the same size and weight as a baby elephant at birth – 250 lbs. 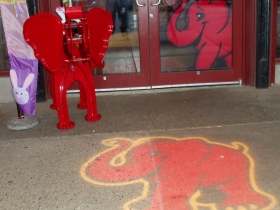 “Cocoa,” Red Elephant’s mascot, is seen in solid and projected form at the cafe entrance. Photo by Peggy Schulz.

In addition to the tantalizing aromas awaiting customers, along with the wide variety of chocolate in many forms, Red Elephant offers gourmet coffee, bakery, ice cream, malts and shakes. A recent poll in the Milwaukee Journal Sentinel picked Red Elephant as one of the Top five hot chocolate purveyors in town.

All of the Red Elephant chocolate items can be gift-wrapped and shipped. One recent customer bought more than $800 worth of the café’s specially made Easter baskets and shipped them to recipients who undoubtedly appreciated the unique style and flavoring.

The majority of the chocolate is locally-sourced. An increasing percentage of the chocolate products is made on-site, in the space behind the retail store/café. Elephant-themed items also are available, including books and tote bags, as well as some solid-chocolate elephant figures. Those planning weddings might want to check out Red Elephant Chocolate for special wedding party gift boxes, featuring custom wedding favors. And for those who like to linger, when the weather permits, Red Elephant will offer outside seating, under the canopy.