The police chief meets weekly with top brass to review crime stats and seek improvements. Part II of a series. 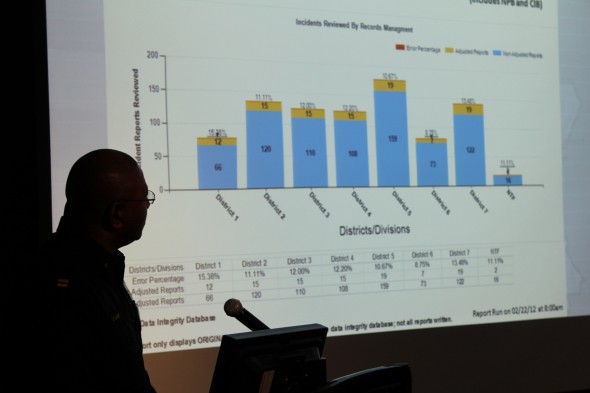 On a Wednesday morning, in a high-tech conference room at the Police Administration Building on 749 W. State St., the brass files in for the weekly Computer Statistics (CompStat) review of crime data.

Promptly at 10:00 a.m., Chief Edward Flynn makes his introductory remarks to the group, then takes a seat in the middle of the room, facing a wall of computer projection screens and surrounded by his brain trust, the top leadership of the Milwaukee Police Department.

The first item on the agenda is District 7 crime statistics. The district is bisected by Capitol Drive and 60th St., with its headquarters at 3626 W. Fond du Lac Ave. It’s headed up by Capt. Regina Howard, who goes to the podium to make her report.

On the projection screen is a chart that shows District 7 crime data for 2013 versus 2012, in four categories: aggravated assault, robbery, burglary and motor vehicle theft. Red means the numbers are trending up; green means they’re trending down.

Unfortunately for Capt. Howard, there’s a fair amount of red on the District 7 chart this morning.

“We’ll start off with aggravated assaults,” she says. “We’ve have ten for the week. Fifty percent of those are domestic-violence related.”

The chief jumps in. “What’s driving the aggravated assaults?”

“We had an impact two years ago,” Flynn probes. “What’s changed? Why are we jumping around so much?”

And so it goes. Brisk questions from the chief. Volleys back from Capt. Howard. And brainstorming all around, driven by a relentless effort to understand the ground truth behind the numbers on the screens. 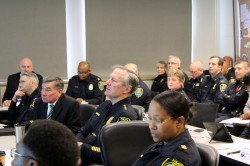 Flynn and his leadership team are dedicated to slicing and dicing the numbers to, in Flynn’s words, “identify threats, measure the results of our interventions, and to hold ourselves accountable to each other and to our community.”

There has been controversy over those numbers. Last year, the Milwaukee Journal Sentinel reported that hundreds of assault cases were misreported in the MPD computer system. An outside auditor later concluded the mistakes were inadvertent, not intentional, and found no reason to believe they’d been altered to whitewash crime data and make the chief look good. Whatever mistakes had been made, Flynn insisted that the numbers were good enough to support his proactive policing strategy, which involves concentrating police resources on high crime areas to snag lawbreakers and deter crime.

At the CompStat meeting, the dialogue between the chief and his staff has shifted to prostitution, and the robberies and assaults that come with it. “Are you working with sensitive crimes?” Flynn inquires of the District 7 captain. “It seems like the supply of prostitutes is remaining the same even though individual prostitutes are moving out, right? Are we debriefing them when we arrest them? Do we know how they’re winding up on our streets? Is there a drug connection here?”

“Are these runaways from domestic violence, child abuse?’

Hot spots for prostitution are identified (Villard and Lisbon Avenues, and North Ave. between 15th and 16th Streets, for example). There follows a lengthy discussion of ways to discourage women from getting into the trade and to divert them out of it once they are ensnared, by pimps, friends or relatives.

Then there’s a discussion of robbery trends in District 7 (up), followed by burglaries (down) and motor vehicle thefts (down). Negative trends are brainstormed for new approaches. Positive trends are analyzed for lessons learned.

Flynn also seems anxious to provide incentives to individuals for good performance. He presses Capt. Howard to provide names of officers who are doing a good job. “Give me some ‘attaboys’ so we can tell people to keep up the good work,” he urges. “Tell me you want to single somebody out for praise.”

Time’s now running short for Flynn, who has to leave at 11:00 a.m. for another meeting. “Let’s move to the performance measures for District Four,” he says. “Just to get started on that before I have to leave.”

He adds, jokingly, “Crime numbers are just too depressing to see.”

Performance metrics for individual officers flash across the big screen — traffic stops, subject stops, arrests and the number of incident reports filed over an eight-week period. The numbers are organized into a matrix with four cells: if the officer’s name is in the in the upper right quadrant, that’s good. If it’s in the lower left quadrant, it means he or she may be under-performing by the department’s standards.

It’s a methodology the chief brought with him when he came to Milwaukee. For the low performers, he wants to know that a supervisor is on top of the matter and is taking steps to address the situation. 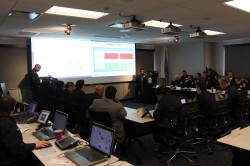 “It’s not a perfect system,” concedes Capt. Aaron Rapp, the head of the department’s Office of Management Analysis and Planning. “But it’s the best we’ve found so far. It’s a way of comparing activity among officers with similar duties, and making sure that people are pulling their own weight.”

It also sends a message: the chief is watching how his people are performing. In any organization, employees are likely to work harder if they know someone’s watching than if they think nobody’s paying attention to their performance.

After chewing over the numbers for a while, Flynn is up and out of the room, on to his next meeting. There’s an evident easing of tension in the room. But the relentless effort to improve the department’s overall crime-fighting continues.