The Drescher file: 18 arrests; no convictions; one heck of a penthouse. 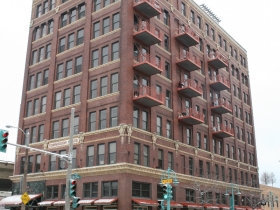 A shot of the Commission House condominiums in Milwaukee’s Historic Third Ward.

The story (which Drescher wrote) followed a hapless character (played by Drescher) in a journey from ballboy in the NBA, to attending seven colleges unsuccessfully pursuing a diploma, to a stint running the famous Boston bar immortalized in “Cheers.”

Eventually, the character “is being greeted at the highest levels of Time Warner, Disney, and Microsoft to successfully negotiate multi-million dollar deals.”

The play was autobiographical; the story was Drescher’s own.

Most recently, Drescher and Partner Jeff Rowe have launched Okanjo [Japanese for “checkout”], in offices in the Historic Third Ward.

The old warehouse district is also home to Drescher, who owns a penthouse condominium unit in the Commission House, on N. Broadway in the Historic Third Ward.

His rooftop residence, and an access apartment a floor below, occupy 3223 square feet of the 1911 structure, originally home to E. R. Godfrey & Sons Co., and later to the LoDuca Brothers musical instrument / wine company before its 2004 residential conversion. Drescher’s pad has three bedrooms and four bathrooms. It is valued at a total of $1,090,700, and sets him back $32,397 in annual property taxes, which he pays on the installment plan. Drescher also owns seven parking spaces in the building, or nearly enough to store all of the vehicles he has totaled over the years. However, he can often be seen in the warm months bicycling through the Third Ward wearing his characteristic all-black ensemble.

Drescher’s aerie overlooks the Milwaukee Public Market, and Cafe Benelux, with its active rooftop. Further animation of his living environment comes from the whizz of traffic of the elevated I-794 freeway where vehicles are but a blur from his lofty perch as they speed their way to oblivion or Bay View (whichever comes first).

How Milwaukee Is It? This place is so Milwaukee that the intersection where it’s located was originally called Detroit and Main streets, and nobody alive remembers those days. It is a mere half-mile to City Hall. Regrettably, the elevated freeway to the north continues to be a blighting influence on the neighborhood, million dollar condos notwithstanding. Mayor John Norquist proposed leveling the freeway and replacing it with a surface road, similar to what was done on W. McKinley Ave. upon the demolition of the Park East Freeway Stub. 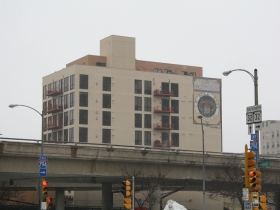 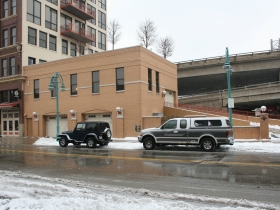 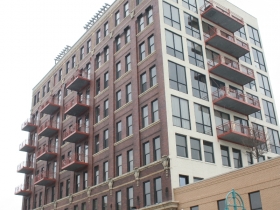 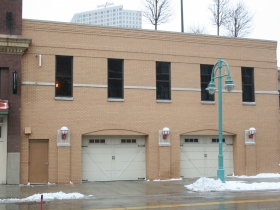 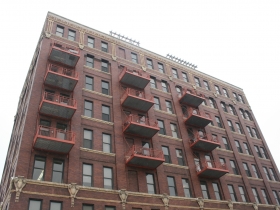 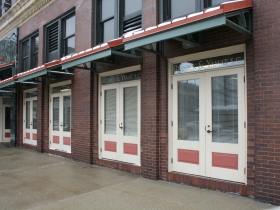 Michael D. Drescher and his brother Jim Drescher founded JDTV in 1981 (named after their father, James Drescher, Sr.) to distribute television listings to cable customers, exploiting a niche overlooked by TV Guide. They sold the firm in 1999 to Tribune Media Services, a profitable division of the Chicago media company that is now emerging from bankruptcy. The Dreschers got between $50 million and $80 million in the sale according to media accounts at the time.

About a year before its sale, Drescher had become the principal investor in the alternative Milwaukee weekly, Metro, which was edited by Bruce Murphy, current editor of Urban Milwaukee. Drescher’s publication was bought out by Louis Fortis and the Shepherd Express, which merged the two weeklies under the short-lived and rather unsightly name, Shepherd Express Metro. (Not long after Murphy quit his post as editor of the merged paper, Metro was removed from the masthead. Your faithful scribe, Michael Horne, also wrote for Metro and for Schmetro, as some called the merged publication, and left it some time after Murphy’s departure.)

After selling JDTV, Drescher funneled his funds into a number of companies, founding Drescher Holdings, Inc., and is also into women’s underwear as a member of the Intimate Apparel Professionals, the Lingerie Industry Professionals and as a director of Heidi Gilmore, Inc., which  briefly had a store at 715 N. Milwaukee Street around the turn of this century.

In 2010 Drescher sued Floyd Mutrux and Jonathan Sanger, some “showbiz types,” who bilked him, he said, of $800,000 invested in their play. Drescher alleged fraudulent misrepresentation, conversion, theft, unjust enrichment and other claims.  See “Drescher vs. “Baby It’s You, LLC.”

Drescher’s latest adventure is Okanjo, “One small click for man; one giant leap for stuff.” The site lists and sells goods for a flat fee of 5 percent. Sellers can donate their proceeds to charity, if desired. The company got a big boost this month when many sellers at Yardsellr switched to Okanjo when Yardsellr announced it was shutting down. Drescher and his partners were able to finance the company with $1.5 million in $50,000-a-share stock, with investors getting a 25 percent tax credit from the State of Wisconsin announced by Gov. Scott Walker in December 2011. As Drescher puts it, “In these types of investments, if you’re hedging your bet by 25 percent, that helps.”