The Harp, an Intimate Irish Pub

Founded as an "authentic Irish bar" in 1955, the Harp is still a Downtown mainstay. 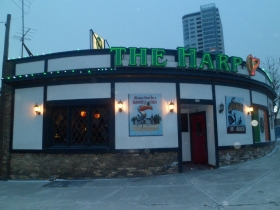 Established in 1955 as an “authentic Irish bar,” as then-owner Josephine Dolan called it, The Harp was originally located at 933 N. Broadway St. However, in 1965, urban redevelopment forced Dolan to move. While many other small business owners affected by redevelopment headed to the suburbs, Dolan resisted and chose to remain Downtown, moving the pub to its current location. According to an account from the old Milwaukee Journal, Dolan did not go quietly. Notified that the premises must be vacated by July 1, on June 30, just before midnight, Dolan staged a traditional Irish wake at the old location. Then, along with bagpipers and roughly 200 customers, she made her way to the new location.

Before The Harp moved in, the building had been home to a number of other taverns since the 1860s, including The Merry Gardens, The Blue Tap Room, The Melzer and Cole Tavern and The Taxi Inn. When Dolan took over, she revamped the establishment’s grounds, adding a new deck, as well as a walkway that allowed patrons to take a gaslight lantern-lit stroll down to the river. She also added a lighted fountain.

Since then, the pub has undergone other structural changes, most notably to the bar. It’s difficult not to notice, once patrons adjust their eyes to The Harp’s dimly-lit interior. The bar takes up a considerable portion of the pub’s small main room, (which used to be even smaller). Looking left from the doorway, people can see the remains of a brick wall, now forming an entryway that leads to the dining area and deck. That wall used to be the extent of the tavern. The bar also used to be a couple feet closer to the door. Pointing downward, where two types of flooring now meet one another, Andrew Dulmes, who managed The Harp from 2008 to 2010, indicates where the bar used to sit.

Even the bar itself is no longer the original one. Today, manager Trevor Johnson says the old bar now resides on the patio. With the changes to the bar, along with moving the back-bar kitchen to its own area just off the side of the bar, Johnson says the flow of the place is better now. Yet the old hyper-intimate atmosphere has been retained.  “When remodeling, it was important not to disrupt the original appeal of the bar,” Dulmes says. “The Harp is a break from other Water St. bars.”

In 2008 The Harp became a member of what Johnson calls owner R.C. Schmidt’s empire of 11 different bars and restaurants, including Trinity Three Irish Pubs, the Water Street Brewery and The Black Rose, just to name a few. Dulmes says the keys to The Harp were handed over on Oct. 1 of 2008, with the bar set to open under new ownership on Oct. 4, which also marked game one of the Brewers’ playoff series against the Philadelphia Phillies. “We had to frantically make the bar ready for the playoffs,” Dulmes recalls, a process which included adding new big screen televisions. “I remember holding up a cardboard template to position the TVs,” he says. Although the Brewers’ 2008 playoff run ended unsuccessfully, the new TVs were a success, making the bar a fun place to catch the game.

Before joining The Harp in Sept. 2012, Johnson used to manage RC’s Beer Tavern on North Ave., an area frequented by college students. “I kept getting older, but the demographic never changed,” he jokes.

At the Harp, by contrast, there has always been an eclectic mix of customers, both Irish American and honorary members of the tribe. “Some of the community’s most substantial citizens, judges, aldermen, a mayor now and then –most with nary a trace of the ‘old sod’ in them — made it their oasis,” the Journal story noted. Dulmes says the city’s common council sometimes did business at The Harp. “It was more than a place for a social gathering. It was a place where business was done,” he says.

The Harp was named one the 30 best bars in the city by Milwaukee Magazine in 2010. It remains a fine place to enjoy Irish beers on draft like Guinness, Smithwick and of course, Harp, though the food menu offers corned beef only as part of Reuben or Rachel (with turkey) sandwich or wrapped in a wonton as an appetizer called a “reuben roll.” We’re guessing Irish purists might not approve but they’d have to applaud the joint’s ability to keep the flow of conversation — all that good craic — going on a nightly basis.

One thought on “Taverns: The Harp, an Intimate Irish Pub”