The Most Public House in Town

Riverwest Public House is a unique cooperative bar inspired by the example of Basque workers in Spain. 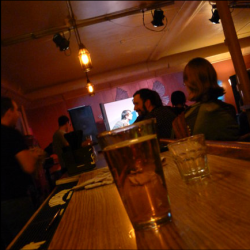 The bar at the Riverwest Public House. Photo by Harrison Turner.

Behind the bar at the Public House at 815 E. Locust St. in Riverwest, a wall of shelves is laden with 100 sturdy ceramic steins, each embossed with the Public House emblem. These stand as permanent tributes to the 100 founding, lifetime members of the bar, one of just two taverns in the nation organized as a cooperative and run as a kind of community-run business.

As co-op members Zach Matthes and Peter Murphy recall it, the conversations that led to the bar arose from the small-town intimacy of the Riverwest neighborhood.  There are so many places to stop and chat, Matthes says, “I can’t walk three blocks under half an hour anymore. It’s a gift and curse, but I wouldn’t trade it for anything.”

Murphy says Riverwest contains something called communitas—an intense community spirit based on equality and togetherness. The corner of Fratney and Clarke is a communitas hub, where the Riverwest Co-Op grocery store stands. As a cooperative business, the grocery store is connected to its community, to the many members who share ownership of it and democratically govern the operation.  Volunteers, customers, and employees all connect here quite naturally.

On a late summer day in 2010, Matthes ran into Murphy outside the Co-Op and told him about a seed of an idea being generated in the neighborhood, to create a cooperative tavern. It would be called the Riverwest Public House Cooperative, and Murphy wanted in on the deal. The two were among the 100 founding members who each bought $200 memberships in the bar.

And so, on St. Patrick’s Day 2011, a once dingy and cavernous abandoned bar was filled with life once again, and quickly began to win the loyalty of others in the neighborhood.   The co-op now comprises nearly 600 member-owners, the majority of whom live in Riverwest and the Public House staff calls by name. Zach Matthes was officially hired “FancyPants Bartender” (an “almost managerial” position) and Peter Murphy coordinates events.

While tavern co-ops are unique, co-op businesses in general aren’t a new idea. According to the UW-Madison Center for Cooperatives, there are nearly 30,000 co-ops in the U.S. operating at 73,000 locations. Americans hold 350 million memberships in cooperatives, most of which are in “consumer co-ops” like the Riverwest Co-Op. In terms of overall economic impact, co-ops are estimated to account for nearly $654 billion in revenue, over two million jobs, and $75 billion in wages and benefits paid.

“Humans in the 21st century start businesses so we can provide for ourselves within a capitalist regime,” Murphy says. “But if we’re going to make a business that cuts people short, that’s not helping. It’s dog-eat-dog, and it doesn’t have to be like that. There’s this alternative that still operates under a lot of the same premises, but it operates a little differently and the differences are really important.”

Most co-ops are modeled in some way after a set of principles drafted nearly 170 years ago by hard-pressed laborers of Britain’s 19th century Industrial Revolution who banded together to improve their working conditions. They would pool resources to operate a retail business, creating a set of principles that are still promulgated today in somewhat modified form by the International Co-operative Alliance:

The Public House, however, adds a new wrinkle to this approach, operating as a kind of seed fund for other cooperatives. This purpose is showcased in the Public House slogan, “building community one drink at a time!” Its by-laws state that the purpose of the Public House is to develop and sustain new co-ops by funneling 100 percent of its profits to an organization called the Riverwest Cooperative Alliance, which is basically a co-op community development fund. The organization is in its infancy and careful legal steps are being taken to set a solid precedent.

Murphy says the Alliance will be a clearing house for expertise and knowledge for launching and sustaining co-op businesses. Other services like advertising, marketing, or accounting could be offered, as well as a way to provide funding for start-ups. The Alliance would be helpful because co-ops involve many people and, like any democracy, those people need information and know-how to become useful “citizens.” Seed funding can be particularly vital because a new co-op can run into funding problems.  For example, the Public House, during the winter before it opened, ran into a $10,000 funding crisis, but within weeks the community filled the gap. One significant loan came from the Riverwest Co-Op and another from a Public House member. But in the future, as the Alliance grows its funding, it could be a source of such stabilization funding for other co-ops.

The Public House also strives to fulfill principle 5, and what better way to get educated than over a freshly tapped beer? On a Sunday evening in December, if you had stepped out of Milwaukee’s sharp and rainy wind into the glow of the Public House, you would have seen a tavern full of lively people drinking and learning about co-ops. Besides hosting rowdy events like band gigs, game nights, and plays, the Public House hosts these educational events. On this December night, the event was a screening of a recently released documentary called Shift Change: Putting Democracy to Work. The film’s focus is a co-op model that is gaining popularity: “worker co-ops” (as opposed to consumer co-ops like the Public House). The film chronicles worker co-ops developing in the U.S. and abroad, including those in Ohio, California, and Madison, WI.

On the Public House drink menu, you will find the short history of the Public House. It states that the tavern was inspired in part by a Spanish company by the name of Mondragon Cooperative Corporation (MCC), which provided the model for the Riverwest Cooperative Alliance.

The MCC is featured prominently in Shift Change. It is the most impressive example in the world of what worker co-ops can accomplish, and has inspired communities all over the U.S. Its radical business philosophy began half a century ago in the mountains of northern Spain.

In 1941, after the Spanish Civil War, a Catholic priest, José María Arizmendiarrieta, was sent to preach in the city of Mondragón, in the province of Gipuzkoa, in the Basque Country of Spain. The war left scars of social and economic depression on the Basque Country, and Mondragón had high unemployment and a grim future. So José María opened a tech school funded by the community, for the community. The priest was versed in social science and economics, as well as Catholic Social Doctrine, which emphasizes socio-economic justice, solidarity in pursuing the common good, dignity in work and the right to work, among other themes. Ultimately, José María’s ideas were passed to his students. Five of those students, under his guidance, opened their own community-funded factory for producing stoves and heaters in 1956. It was the first manufacturing co-op of MCC.

Since then, co-op after co-op has been launched and MCC now comprises 120 independent companies, employs 84,000 people, and has $25 billion in annual revenues, according to Shift Change. It is the largest business group in Basque Country and the tenth largest in Spain in terms of sales and workforce, and has a presence on five continents, according to its latest corporate profile.

Worker co-ops are an up-and-coming trend in the U.S. Estimates for how many exist nationally are hazy, but the UW Center for Cooperatives estimates 500. And many are influenced by the MCC model. On Feb. 10 at 6 p.m. Ann Hoyt of the UW Center for Cooperatives will give a talk at the Public House about Italian co-ops that hire ex-convicts, helping prevent them from revisiting prison. Murphy says he’s excited about the prospect of such “social co-ops” operating in Milwaukee, to employ at-risk youth and ex-cons.

Murmurings in the Public House community are that a co-op charter school, a hyper-local utilities co-op, a co-op bakery, pharmacy, daycare, and other businesses could suit the area well. Murphy says a community of co-ops could expand Riverwest’s sense of communitas.

“The vision for the Alliance is that we can start more co-ops, so that we can keep local money local and take ownership of our own job creation,” Murphy said.

Meanwhile, Zach, Peter, and the rest of the Public House workers collective will keep the place running and the drinks a-coming, “building community one drink at a time.”

6 thoughts on “Taverns: The Most Public House in Town”