In a city of 1,600 restaurants, this family-owned place offers a European-styled, small-plate cafe and bar.

On a crisp winter evening that sent a few furtive snowflakes our way, Allium, on the  northwest corner of Windsor and Prospect, sparkles, defined by red lights festooning a tree inside an intimate space that would be perfect in Paris or Prague. But it is instead located on a one-way Milwaukee avenue with cars roaring northwards, exiting Downtown. Allium is a small plate place, more café than restaurant. Like a handmade kidskin glove, it’s a perfect fit for those seeking civility. 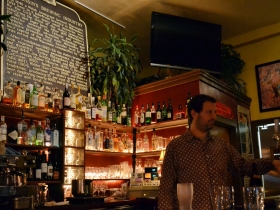 All is serene at 5pm, as Allium’s owner, Stephen Haig Marks, readies a bar fronted by five chairs, smartly angled with military precision. He’s polishing glassware, answering the phone, running back and forth to the kitchen, and checking the rows of glittering bottles of diverse libations, including whiskey from India.. Ten tables wait for customers to arrive and listen to tonight’s select smoothie, Nat King Cole, whisper about “this time is my time.” An employee sitting at the bar uses a laptop to bring up the latest version of the menu, which Stephen and this chap are re-thinking.

A friendly waitperson whose name is “Spirit” arrives with a just right whiskey, and as it slides down, Spirit suggests, that perhaps, the vegetarian lasagna, made with 100 percent Wisconsin ingredients, would be a fine choice.

Spirit has been an employee for six months. “I live in the first house to the west,” he says. “No need for a car.” Is it he who arranges the bar chairs with military precision? Actually, he says, “I learned to do that while working in a restaurant in Hawaii. Everything had to be just so.” But he did serve in the military.

Formerly known as Cafe Brucke, Allium is located in the 1927 Spanish Revival “Bertelson” building, designed by Martin Tullgren & Sons. In 1992, it was added to the National Register of Historic Places, and its current designation is Commerce/Trade with a sub-category of “Business.”

It’s a family business for Marks and his wife Jennifer, the parents of three lively kids who were in the restaurant at the stroke of 5pm, but were trundled off by their mom shortly thereafter. The family owns a home in Riverwest, and the two oldest kids, Eli and Lucia, attend the Montessori School on Maryland Ave. “My wife makes great pizza,” Stephen says, “but she can’t eat it because she’s breast feeding our baby Iyla.” He calls his wife the perfect partner. Not only does she come in to clean Allium, she also whips up desserts and helps out so her spouse can catch a few zzzzs.

Marks hasn’t changed the ambiance much since the days when the space was occupied by Café Brucke, though the list of wine-by-the-glass is more extensive. The art on the walls has changed, too. He allows no posters or media materials on the windows of his venue, the one exception being, a small informative poster about a Montessori happening. Otherwise, a tsunami of paper would swamp his place post-haste. 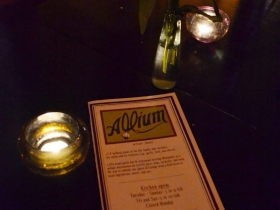 “Allium,” as the slender menu explains, is the name of a bulbous plant of the lily family that includes the onion and its relatives. It’s also meant as a kind of romantic buzz word that might bring to mind local ingredients, music and art and perhaps the avant garde.

The place is indeed hip and haute, but why would anyone in their right mind go into the restaurant business, in the middle of an economic decline, unless they desired “suicide by crostini”? Let’s not confuse this small business with the federal government’s definition of “small,” on CNN.com: “having less than 500 employees.”

Marks has just six employees, and plenty of optimism. Yes, the location is great, because lots of folks in the nearby apartments and condos would rather die than cook. On the other hand, he’s up against fast food deliveries, deli quickies, and big box grocery stores, not to mention other eateries out to gobble up business. There’s an element of the heroic in this tale. The City of Milwaukee Health Department estimates there are 1,500 to 1,600 restaurants in the city, a number that fluctuates daily because new ones open, while others close down. Allium faces the same problems that swallow profits of more lavish venues: fluctuating food costs, rising utility costs, and a lagging economy that likely will lag for some time. Reports suggest folks are spending more in bars these days, drinking perhaps to a resuscitated economy? Or drinking more because it hasn’t resuscitated enough?

The New Yorker’s annual “food issue”  in December includes a story on the latest rage, “underground dining,” where the monied gather, perhaps in a chef’s apartment, and pay pricey prices to have their palates tickled. Marks knows all about this trend, which has found its way to Milwaukee, and offers yet more competition to restaurants. The article is unforgiving about the truth of things in the restaurant business, items like expensive leases and fickle clientele. Stir in a stale economy and you have the recipe for failure. Marks signed a five year lease in 2010, with an option to extend.

That said, Allium has a definite niche, (classy, discrete, a first-date small plate place, plus modest prices). On the surface it seems small enough to manage efficiently, and Marks certainly knows the restaurant business. He worked previously at Bartolotta Lake Park Bistro, and also at their now defunct pizza place on Downer Avenue.

A thrifty guy who drives a 1989 Audi, and weather permitting (or if the car isn’t functional), walks to work, Marks was born in 1975, and raised primarily in Wauwatosa where he attended grade and high school (‘Tosa West ’93). He spent a slice of his growing-up years in London, and still retains British citizenship. Perhaps this explains the soccer games on Allium’s television set, discretely hung on a far corner of the wee but swell bar. A soccer fan (and North Avenue café proprietor who came in for some libation), is at the bar. He’s from England, specifically Manchester, and his accent rolls forth as thick as pease porridge hot.

During his London hiatus, Marks lived with his grandparents, World War II survivors who cooked everything from scratch. “Sometimes grandfather would go out for fish & chips,” Marks says, adding that “then we’d sit and watch ‘Coronation Street’ on TV.” It’s the longest running soap on BBC, and by jove, you can still watch it these days, though it’s doubtful that Marks will ever run segments on Allium’s television.

Still, Allium is styled as a “small plate/European” cafe,  with a generous selection of European wines and beers and dishes like Mediterranean Crostini, a Spanish Sausage Trio, Prosciutto-Wrapped Dates and Italian Slurry. As for the aforementioned vegetarian lasagne, it was as good as Spirit had promised. As we finished our meal,  the place was filling up with folks out for the evening, folks both new to Allium, and not. Our check arrived, hand-written and discretely delivered, a touch of class in a world of chaos. 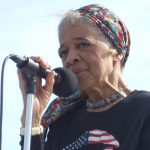 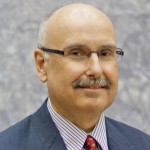 Losing a South Side Landmark by Ald. Mark Borkowski 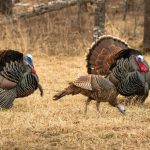