The Truth About Fat

“We have met the enemy, and he is us.” – cartoonist Walt Kelly

About two weeks ago I cracked opened my copy of the Milwaukee Journal Sentinel and saw a headline that read “State could save $12 billion if residents slim down, report says.”

Thanks to the efforts of Michelle Obama, everyone is aware of our country’s obesity epidemic. And it goes as commonly accepted knowledge that obese or overweight people in Wisconsin tend to live in the inner city, barely finished high school, are poor and African American. But is that really the case? As I mentioned in an earlier column, the reality is more complicated than many people think.

Back in 2008 the Wisconsin Department of Health Services first rang the alarm bell when they issued a report that showed just how fat we’ve become. But a close reading of the report reveals that 67.2% of the state’s African American population was obese or overweight, compared to 62.6% of the white population – only about a 5% difference between the two groups. A geographic analysis of Wisconsin children between the ages of two and four years found that 35 of Wisconsin’s 72 counties have a higher incidence of obesity than Milwaukee County. Inner-city Milwaukee children may be eating more than their fair share of junk food, but youngsters in Kenosha, Walworth, Racine, and Fond du Lac counties love their brats, kringle, and cheddar even more.

Education levels in Wisconsin aren’t a good waistline predictor either. Of the residents who failed to complete high school, 61.1% are overweight or obese, compared to 61.2% of our state’s college graduates.

But what about Milwaukee, our state’s largest and most populous city? For the past three years, Milwaukee’s Center for Urban Population Health and the City of Milwaukee Health Department have published a comprehensive annual report that distills the reams of public health data into snapshots of Milwaukee’s health.

We know that major grocery store chains tend to build stores in more affluent areas, and that inner city people don’t have access to the fruits and vegetables that we need for healthy, productive lives. Last year 60% of the food retailers in lower Socio-Economic Status (or “SES”) neighborhoods were of the convenience store variety, compared to 30% of middle SES and 10% of upper SES geographic areas. 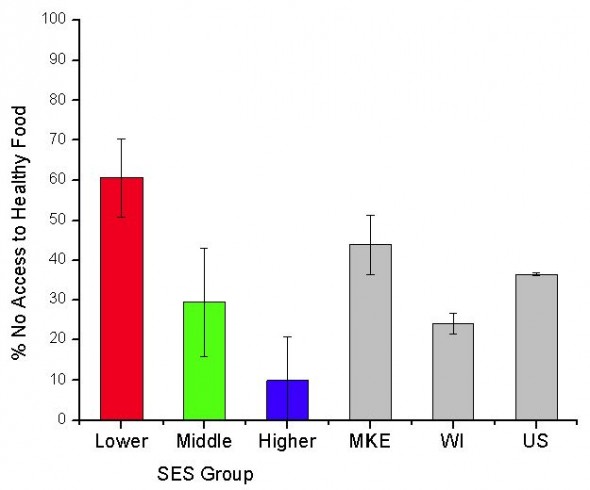 Despite this lack of access to fresh fruits and vegetables, the report shows that 34.5% of Milwaukee’s lower Socio-Economic Status (or “SES”) population is obese, compared to 31.1% of middle income residents – about a 3% difference. 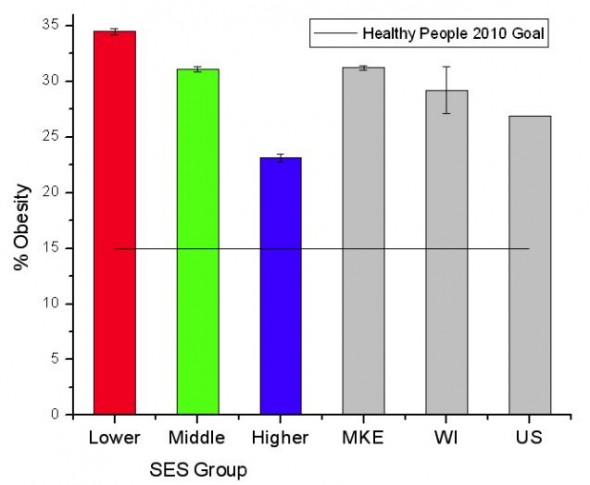 And when it comes to being overweight, less fat than obese but still not good, middle income Milwaukee is actually doing more poorly than lower income folks. As for higher income Milwaukeeans, despite better access to healthy food, they are not fairing so well in their battle with their waistlines: 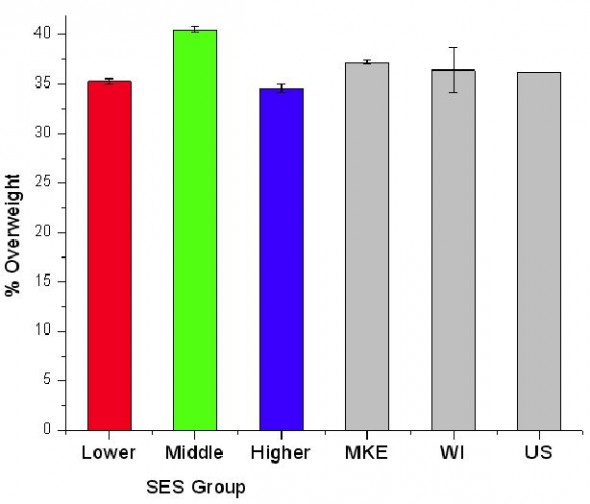 So what’s going on here? A few years ago some colleagues and I conducted a focus group study to learn how exactly Milwaukee north side residents got their food. We learned that these shoppers (nearly all of whom were female) used their ingenuity and social connections to overcome the lack of convenient healthy food. They tended to lack reliable transportation and because grocery shopping via public transit is often not practical, many reported borrowing cars and coordinating Saturday shopping trips with neighbors and friends. They scanned newspaper supermarket ads, clipped coupons, and visited up to five grocery stores and the local Fondy Farmers Market to get the best deals. Against the odds, a sizable chunk of inner-city Milwaukee has learned how to eat healthy.

Yes, people in our state do need to slim down. Wisconsin would save a lot of money if that happened. But I’m sure that all of us can name at least one aunt, uncle, nephew, or friend who takes a little too much pleasure in eating and could stand to lose at least 40 pounds. The problem is broad-ranging. It’s not the moocher class that is going to cost us $12 billion in health care costs down the line. It’s not “those” people. It’s us.