Genetically modified plants are changing the food we eat. 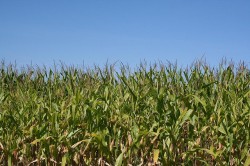 Monsanto. This one word makes me all frothy. The company is changing farming, and the food we eat, in worrisome ways.

Farmers and gardeners have been playing with plant genetics since the beginning of time. Heirloom tomato varieties like the Cherokee Purple came into being when enterprising farmers cross-pollinated cultivars to create the varieties that seed banks, home gardeners, and gourmands treasure today.

In 1972 genetic researchers discovered a way to combine the DNA from unrelated species to create new organisms. The new discovery, called recombinant DNA technology or gene splicing, allowed the development of products to treat hemophilia and certain types of diabetes. It was also used to create glow-in-the-dark fish for home aquarium enthusiasts. Then corporations like Monsanto took plant breeding to new heights by creating genetically-modified organism (or GMO) plants with improved disease resistance.

The most infamous of these products is Monsanto’s “Roundup Ready” line of corn, soybeans, cotton, alfalfa, and sugar beets. The thinking behind this concept was simple. Create GMO plants that tolerate Roundup, plant the seeds, and then douse the fields with Roundup to kill off weeds and other competing plants. Farmers flocked to Monsanto in droves.

Of course, all of this research was expensive and like any company trying to maximize its return on investment, Monsanto obtained patents on their seed DNA. But genetic materials have a funny way of spreading. Plant pollinators like the wind, rain, birds and bees don’t respect property lines. Non-Monsanto farmers using land near Monsanto farmers found Roundup DNA in their seeds. So Monsanto took these farmers to court on the grounds of patent infringement.

In 2007 Monsanto acquired the Delta and Pine Land Company, a firm that owned patents on so-called “terminator” or “suicide” seed technology. These GMO plants produce sterile seeds, requiring farmers to purchase new seeds every year. Environmental groups opposed the technology out of fear that this terminator effect would spread to other plants through pollination, thus rendering all of them unable to bear fruit. Fortunately, Monsanto pledged to not market these terminator seeds.

Meanwhile, nature has adapted to a post-Monsanto world and a new generation of Roundup-defying “superweeds” are galloping across the American heartland. Farmers have been forced to spray their crops with an even more toxic cocktail of weed killing chemicals. Last year researchers found signs of another generation of weeds that are resistant to these new cocktails.

There are more signs that our understanding of recombinant DNA technology is not complete. In 2011 a respected plant pathologist at Purdue University discovered a new pathogen, previously unknown to science, in Roundup Ready soybean meal and corn that are fed to livestock. Laboratory tests have confirmed the presence of this new pathogen at high levels in livestock that have experienced miscarriages and infertility. The same pathogen has been found in high concentration in soybean and corn crops that have been stricken by disease.

This is not the first time humans have tried to manipulate nature with an incomplete toolbox. Officials in eighteenth century Prussia became alarmed with a growing shortage of old growth forests. Trees from these old forests were felled for wood, which went into nearly everything – heat in the winter, houses, beer barrels, pianos, rifle stocks. Faced with dwindling supplies and foreseeing economic calamity, these early forestry scientists studied the available trees varieties and landed on the Norway spruce. Hardy, fast growing, and applicable to a wide variety of uses, it seemed like the perfect tree.

As old growth forests were used up, they were replaced by acres and acres of Norway spruce trees. With a single-minded Germanic efficiency that many Milwaukeeans know well, all competing plants and underbrush were eliminated so that the trees, planted in neat rows to facilitate easy extraction, would grow as quickly as possible. This new wood production technique was a resounding success in the short term.

The first batch of spruce trees did well because they were mining the nutrient-rich soils of the old growth forests they had replaced. The second rotation of trees did so poorly that forestry scientists coined a new word, waldsterben or “forest death,” to describe what was happening. Recognizing that they had dismembered a symbiotic ecosystem of fungi, insects, mammals, flora, and birds that had helped old growth forests thrive, the scientists began installing nesting boxes to encourage owls to return. School children were recruited to raise and implant ant colonies to replace the ones that had disappeared. Spiders were reintroduced. But these mono-crop forests still failed because forestry science did not understand the complex ecosystems that made trees grow.

GMO foods present a more formidable problem. They now dominate the American farming landscape. The USDA estimates that 94 percent of soybeans and 70 percent of corn in the U.S. have the Roundup-resistant gene. And since the byproducts of these plants are found in almost everything you see on the supermarket shelves, you have probably ingested GMO foods.

The good news? Because genetically engineered plants are designed for large mono-crop farming applications, they have not trickled down to farmers markets. The farmers that supply these markets grow a little of everything. To Monsanto they’re small potatoes.

Bestselling author Michael Pollan encourages people to vote with their forks, because food is one of those areas where the personal is political and the simple act of cooking produce from a farmers market can reclaim the food system from agricultural corporations like Monsanto. As he puts it, “There aren’t many places in the world where the right thing to do is the most delightful thing.”

This coming November a ballot initiative called Proposition 37 will go before voters in California that will require labels on all food products that contain genetically modified ingredients. If successful, the initiative will have far reaching effects on how American consumers are educated about food. If it fails, there will be other efforts. Our food war is just beginning.