No money for transit, but plenty for freeway expansion. 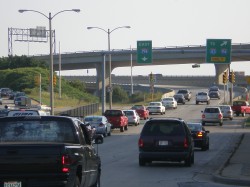 The ACLU of Wisconsin and Midwest Environment Advocates have filed a federal lawsuit on behalf of MICAH and the Black Health Coalition, challenging the state’s decision to go forward with a $1.7 billion expansion of the Zoo Interchange. The groups claim the Wisconsin Department of Transportation and Federal Highway Administration violated the National Environmental Policy Act by failing to consider all the impacts of expansion.

Rev. Willie Brisco, MICAH President, quoted on the ACLU of Wisconsin blog, spells out the motivation behind the lawsuit stating, “We all know that people of color depend on transit to get to work… We need more transit – to more places where the jobs are – not just highways that don’t help these members of our community get to work.”

This isn’t the first time WisDOT has been sued over this very issue.  A settlement was reached in 2000, which arose out of a similar lawsuit regarding I-94 corridor planning.  According to The ACLU of Wisconsin, the WisDOT agreed it would “continue to use its best efforts to expand and improve transit service within the Milwaukee Metropolitan Area to enable transit dependent residents of Milwaukee to better access areas of job growth.”  But where are the tangible results of that promise?

These groups are not trying to stop the whole project, and are not arguing against rebuilding the interchange. Rather, they are taking issue with WisDOT’s continued disinvestment in Milwaukee’s transit system, while continuing to plow forward with costly freeway expansions. This practice has disproportionately benefited suburban residents at the expense of the residents of the City of Milwaukee — specifically the poor and others who depend on transit to get to work.

While this lawsuit is an attempt to encourage WisDOT to develop a diversified transportation system, another ongoing legal maneuver attempts to do just the opposite. Brett Healy, President of the John K. MacIver Institute of Public Policy, has filed a petition with the Public Service Commission to force the City of Milwaukee to pay utility relocation costs of the streetcar project, effectively an attempt to stop the city from moving forward with diversifying its transportation system. Over the past 20 years plans for commuter rail, light rail, busways, and dedicated funding for standard bus service have been dropped, cut, and routinely attacked by suburban leaders at the expense of city residents, while at the same time freeway expansion after freeway expansion receives the green light.

There’s no doubt the Zoo Interchange is an important piece of Wisconsin’s transportation network, but freeways shouldn’t be the only piece of that network.

A Toronto Mayor’s War on Bikes

Toronto Mayor Rob Ford is no friend of bicyclists and has a long record of being an outspoken champion of car culture.  He’s often complained about a “war on cars,” and once famously said, “I can’t support bike lanes. Roads are built for buses, cars, and trucks.”  Then as if to solidify his car culture credentials,  he added, “My heart bleeds when someone gets killed, but it’s their own fault at the end of the day.” That’s right, Ford automatically blames the bicyclists if any are killed on the streets of Toronto.

I might suggest inattentive driving as the real problem, not people biking on the street. Former Milwaukee Journal Sentinel reporter Tom Held, who now does the Active Pursuit website, reports that drivers were at fault in five of the six bicyclist deaths on Wisconsin roads this year. Granted, that’s a small sample, but people texting, dialing, or even reading while driving are a much bigger threat to a bicyclist’s life than someone attentively driving along side bicyclists in a bike lane.

So when Ford was recently spotted reading while driving his black Cadillac Escalade down a freeway in Toronto, his actions point to the real problem, distracted driving. Mr. Mayor, put that paper down so you don’t kill someone.