The Impending New Milwaukee Delegation, Free Brewers Tickets for Aldermen, 24 to 1, and More

Welcome to the ninth installment of Eyes on Milwaukee. This week I examine the coming changes to the Milwaukee Delegation, how another big city gets quite the luxury perk, the difference between the charter meetings of the City and County, Milwaukee’s new City Clerk, and more. Of course, I also include one last plug to check out our new store’s grand opening this weekend as part of Gallery Night and Day.

If you’re looking for something to do Friday, April 20th, look no further. We’re having a grand opening party at Urban Milwaukee: The Store in conjunction with Gallery Night. Come join us at the store anytime between 10 a.m. and midnight. Take the “art tunnel” through the back of our store to Sublime between 5 p.m. and 9 p.m. for happy hour drinks and appetizers.

Urban Milwaukee: The Store is located in the Colby-Abbot Building at 755 N. Milwaukee St and sells paintings, photography, t-shirts, postcards, books, and more, all of which showcase Milwaukee, and are made by Milwaukeeans. If you needed more convincing, Milwaukee Journal Sentinel art and architecture critic Mary Louse Schumacher also recommends you stop by the store.

Learn more about the store or RSVP on the Facebook event.

If you’ve been upset with the failure of the Milwaukee delegation to deliver dedicated funding for transit or reform for Milwaukee Public Schools, you will have a largely new slate to blame in the near future. Of the 23 member delegation, it’s entirely possible 7 or more seats will have new representatives. While many of those changed seats are going to be occupied by current delegation members, there will still be a substantial amount of new blood.A number of familiar faces are leaving their current office for one reason or another.

If you expected much of anything to change, however, don’t bet on it. There still is no sign that the delegation has any clear legislative priorities.

Imagine if the Milwaukee Common Council (or the Milwaukee State Legislature delegation) were given free tickets to every Brewers and Bucks home game. It seems inevitable that stories would emerge of politicians appearing drunk on the scoreboard, or south side politicians caught cheering for the Cubs. Who knows, we might even get better candidates for office if they knew free season tickets were part of the deal. In Washington DC though this is almost exactly what happens, although it’s much worse, and far more embarrassing (although DC local politics have a history of embarrassing moments).

In a move that only a corrupt politician could love, the Mayor and Council of the District of Columbia are given free tickets, including a luxury box, to every Washington Nationals home game and Verizon Center event (home of the NBA’s Washington Wizards). The notion that politicians get such a luxury benefit is a bit disgusting from a good government standpoint in the first place (we all know a politician could likely score a free ticket to a game without it being law), but the DC politicians have found a way to make it worse year after year it seems. In exchange for public financing for the construction of Nationals Ballpark and renovations to the Verizon Center, DC’s elected officials have found themselves in possession of one of the most stereotypical luxury goods, the stadium luxury box. The icing on the cake? Rather than quietly enjoy this arguable bribe (I’m sure they would argue they give many tickets to their constituents), they manage to squabble about it year after year.

Mark Belling would have an absolute field day if the Milwaukee Common Council cut library hours and finished the night taking in a Zack Greinke outing at Miller Park, at least until they invited him.

24 to 1 – County vs City Leadership Votes

When I tuned in to listen to the fun the County Board was having around round 15, Dimitrijevic, Jursik, and Lipscomb all had 5 votes, Johnson had 2, and Weishan had himself. It took nine ballots and two recesses to sort things out from there. When Johnson pulled out, he and Mayo both switched their votes to Dimitrijevic following a recess. Then, after a few more gridlocked votes with little progress, Lipscomb called for a recess. While I don’t know what happened during the recess, clearly it didn’t turn out the way Lipscomb planned. Upon returning from the recess all but one of Jursik’s votes flipped to Marina, and the Board had elected a new chair.

One is likely to point out that Hines is an incumbent, but requiring 20 plus votes to decide the matter is quickly becoming a pattern for the County Board. It took a whopping 45 votes to re-elect now retired Lee Holloway to the post of Board Chair in 2008. How this issue doesn’t get sorted out behind closed doors is a bit of a mystery.

Also of note is to the degree to which the City versus County make themselves accessible to those not able to attend in person. Whereas many City meetings are video broadcast on the web and on cable channel 25 (99 on AT&T Uverse), with minutes posted to Legistar shortly thereafter, County meetings rarely include video, and often include an extremely poor audio feed where many Supervisors fail to speak into their microphones and are literally inaudible. Making matters worse for County government access, my unscientific polling shows the County is much slower at posting meeting minutes. This includes the still unposted minutes from the charter meeting of the Milwaukee County Board of Supervisors held on Monday. While the County is overall moving in the right direction, they are still pathetically behind the City in this area. Hopefully the new Board Chair can turn things around with help from Supervisor Jason Haas (who does an excellent job live tweeting the meetings he is at).

See for yourself – Milwaukee County Legistar and City of Milwaukee Legistar.

Milwaukee has a new City Clerk – Jim Owczarski. Owczarski was formerly the Deputy City Clerk. The City Clerk is appointed by the Common Council for a four year term. Previous City Clerk Ron Leonhardt retired following the completion of his last term.

Up in the air at this point is if Owczarski will be able to continue his live tweeting of meetings with his new role. He previously had done a superb job of keeping the public informed during meetings with a unique vantage point from the Clerk’s desk that overlooks the Common Council members.

Joe Klein’s office building plans for 27th and Wisconsin are moving right along. Of interest is that Alderman Bauman dropped his opposition to the project following a few design changes that were made. Changes that the design team and Department of City Development Commissioner Rocky Marcoux said weren’t possible.

The BizTimes has more on the potential development of the Italian Community Center’s massive slice of Third Ward land.

The proposal to convert a six-story warehouse into an apartment building on Pierce Street has run into a financing snag.

The Board of Zoning Appeals will hear Sciortino’s appeal to tear down an adjacent home to expand their bakery on Monday.

Brady Street’s most suburban shopping center won’t be getting any less urban. Alderman Nik Kovac has indicated that he has reached a settlement to prevent the proposed demolition of a house (1724 N Warren Ave.) behind the shopping center that was intended to be converted to a surface parking lot. Michael Horne has more.

Zilber Property Group bought a 712 stall parking garage from Wispark LLC, the real estate arm of WE Energies. The garage is on the north side of Michigan Ave between 4th and 5th Streets.

Arin Bert, a new Armenian restaurant located at 222 W Wells Street in downtown Milwaukee, is featured on OMC. Arin Bert was mentioned in a previous Eyes on Milwaukee column.

Ichiban, 2336 N Farwell Ave, has closed its doors. The owners of the shopping center where the business was located have purchased the assets and are trying to find a suitor to reopen the Japanese restaurant.

Impala Lounge opened at 701 E. Center Street. The tavern is owned by Wendy and George Mireles, who also own Cafe Corazon. The space was formerly home to River Horse.

Odd Duck is now open in Bay View. We had mentioned this cafe and bar’s impending opening in a previous article.

Tazinos Pizza & Salad Bistro will open at CityCenter at 735 in a space along the Milwaukee RiverWalk. The downtown location will be their first in the neighborhood and fourth location overall.

Two Bucks hopes to open in early May in the former Dog Bullocks space at 2321 N. Murray Ave.

VETransfer will relocate from the former Old Navy space in the Plankinton Arcade to the Blatz Wash House. 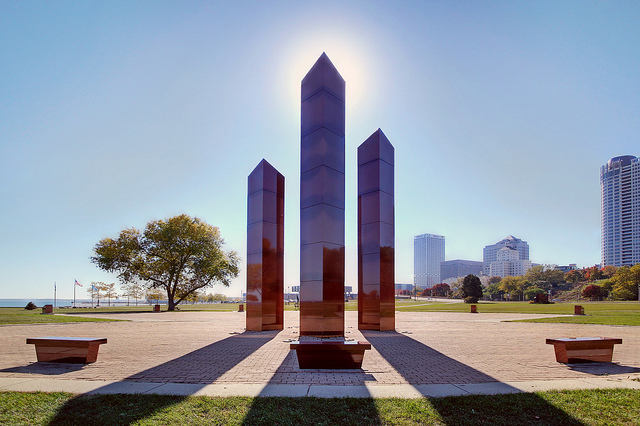 5 thoughts on “Eyes on Milwaukee: The Impending New Milwaukee Delegation, Free Brewers Tickets for Aldermen, 24 to 1, and More”