Demolish Part of Downtown Milwaukee? No. 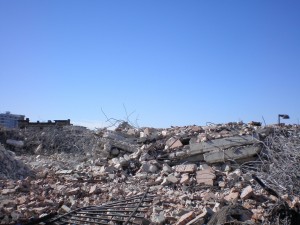 Recently, it was reported that Robert and Michael Levine are once again considering the demolition of historic buildings along Wisconsin Ave. and Milwaukee St., this time with the hope of landing a hotel development.  The proposal draws upon the failed “urban renewal” projects of the past.  Bulldoze the heart of the city, level the past, and then try, one day, to build new.  Unfortunately, the most common results of which are new surface parking lots, a loss of city character, and (if we’re lucky) sterile, suburban-style development, not high-quality, urban infill development.

This plan is especially disturbing as there are great models of what can be done with historic structures, literally all around this block.  In the Historic Third Ward, an entire neighborhood has grown up by investing in aging structures and mixing in new development, not by mass demolition.  Just down Milwaukee St. from this site, Milwaukee’s high-end entertainment district is a direct result of the restoration and re-use of historic structures.  In view of the buildings that are to be torn down, there are now plans to renovate the historic Loyalty building and convert it into a hotel.  Not too far from downtown, the Iron Horse Hotel, which was recently named the “Boutique Hotel of the Year” 2010 by the Boutique & Lifestyle Lodging Association, is a fine example of rehabilitating and re-purposing a decaying structure.

Demolition isn’t the only option.  Instead of demolition there are numerous ways that these buildings can be saved and returned to active use.  The owners could work with the City of Milwaukee to acquire facade grants to fix up the front of the buildings.  Much like the owners of the historic Colby Abbot building have done, there is an opportunity to work with BID #21, and get involved with programs such as the Holiday Lights Festival Retail Emporium.  Beyond these programs, there are federal and state historic tax credits that can be used to rehabilitate these structures.  There is also the very real possibly to utilize tax incremental financing from the City of Milwaukee if a solid project is put together.  It is certainly worth saving these buildings, given the available aid programs, the great character of the buildings, and the excellent examples to draw upon.

There may come a day when tearing down portions of the Milwaukee’s core to build new is advised, but no, today is not that day.

UPDATE: If this project were to go forward it would be Wave Development, LLC, as the developer.  Robert and Michael Levine would sell the Broadway Books and Starbar buildings to Jackson Street Management, LLC which would tear them down, and other buildings, to build the hotel.  Further, this project would demolish buildings on Wisconsin Ave., and Milwaukee St., not Broadway.  A related project, involving some of the same property owners, would demolish building(s) on Broadway.  All of this area is in a Historically designated district.

22 thoughts on “Demolish Part of Downtown Milwaukee? No.”