By Valerie J. Christell - Aug 31st, 2010 04:00 am
Get a daily rundown of the top stories on Urban Milwaukee
Imagine you’re so stressed out that you desperately need to get far, far away from the maddening crowd. In this fragile state, you venture onto a website about an isolated place called the Commonwealth of New Island— a 12,600 sq. mile land mass tucked away in the southern Indian Ocean.

Soon, you’re excited about this potential escape after you’ve examined the maps of the terrain, perused the images of the environment and people, and checked out the coinage—discovering that the exchange rate is, indeed, good. You’ve even ordered the Travel Guide describing the history of this previously unknown island.

The Coast at Last. Art by Lee Mothes

You decide it’s the perfect get-away, except no travel agent will book the trip for you…and now you truly want to go, um, Postal. But wait, there’s someone who knows New Island like drawing the back of his hand and will sell you property there and even help you ascertain the best location to open that special little business of yours if you desire never to leave.

Welcome to the mind of Kaukauna, Wis. artist Lee Mothes, whose paintings, though realistic, are essentially created a la Frankenstein within the environment of his mind from places he has lived, visited or seen in magazines. What began as one painting of one place has expanded to varied depictions of life on this remote island that he’s now opened to visitors.

Lee was, perhaps, spurred on in answer to viewers who, not content with merely enjoying his pensive images, kept asking where the original sites were. People just seemed to want to travel there.

Lee’s so-called obsession with visually creating the island of his mind has not only resulted in hundreds of paintings portraying the Commonwealth of New Island’s varied landscapes and buildings from coast to coast, but its flag, Coat of Arms, maps, coinage, stamps, artifacts and property listings.

Ask Lee and he’ll tell you that it’s an old island of sand with a limestone stratum that is sparsely inhabited by an array of “tribes” including farmers, shoemakers, hunter/gatherers, witches and town dwellers. Continue in the conversation and you’ll learn much more about the history of the land and its Russian-influenced people.

Gaze at Lee’s paintings and you’ll find descriptive accounts of an island so remote (in so many ways) that it’s retained the charm of the past that, though begun for Lee in the 1990s, seems to have visually arrested its growth in the ’50s. According to Lee, it’s in a “timeless now.”

There’s no pollution to dirty the sky or clouds that drift aimlessly by; the ocean’s color is rich beyond measure. Old-fashioned tricycles litter dilapidated roadways desolate except for a few wanderers who don’t own, or need, cars.  There’s an electric train, though, driven by hydropower that was donated to the islanders from the Russian people after the Cold War.

As I noted at the start; you, too, can join Lee on his Island. You may purchase a parcel of land after reviewing listings with maps and essential information beginning with elevation and access. After your purchase, you’ll receive an actual deed from the Commonwealth.

You can then be among others who have designed their Island dream houses and scenery specific to their chosen niche, which Lee has then painted for them to reminisce about wherever they find themselves living—as long as it’s off the Island.

Beware, though, that if you’re one of those multi-national corporations searching for another country to rape and pillage, skip this one because the founding father’s strong conservationist attitude won’t allow you near the place.

Silly thing to say, you think? Well, tell that to the foreigner who wanted to collect the coins he saw online and became slightly irate when learning that they weren’t real. Or the teenager who fell in love with the place and was truly disappointed it was a figment of someone’s imagination instead of a promising vacation destination for her family.

Or Takeuchi Makoto, Japanese author of Three-Piece Story, whose character, in Episode 7, chose New Island as the meeting place for three internet chess players from different countries. An additional, unexpected result of this story was New Island appearing on a Japanese Tourism website.

All said and done, Lee’s Island of his imagination doesn’t exist to fool anyone. It exists purely out of his passion for an aged, yet ageless, land rife with history and stories waiting to be told someday, perhaps in the New Island Putney Times. 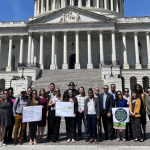 The State of Politics: Controversy Over Parole Is Rare by Steven Walters