In celebration of National Sandwich Day 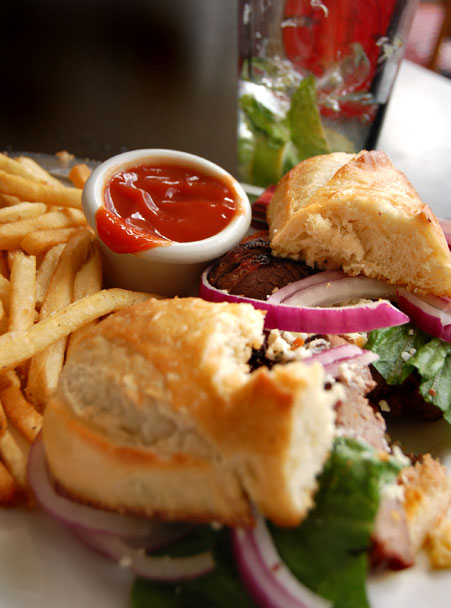 The flatiron steak sandwich at Trocadero in Milwaukee.

The sandwich may never be considered a high-culture item. The instant you say the word and picture it in your head, childhood memories and simple pleasures come to mind. You can use truffle oil and mascarpone to accentuate your chicken salad sandwich, but to many it remains an item that fits inside a Scooby Doo lunchbox.

Most everyone knows the established origin of the sandwich: It’s 1762. John Montagu, the fourth Earl of Sandwich, was gambling and didn’t want to stop. He ordered the cook to put meat between a cut loaf of bread so his greasy fingers would not smudge the playing cards. It was an interesting legacy from a man given to all of life’s vices in its fullest. 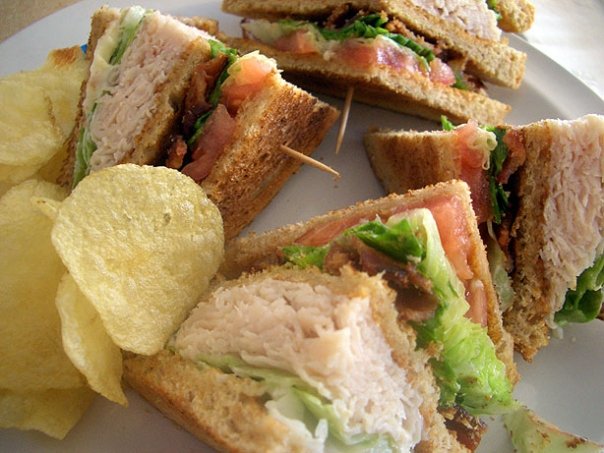 Turkey Club, from Ted’s in Wauwatosa

This history holds about as much weight as an invisible sandwich and as much validity as Christopher Columbus being the first to discover America. Well before that story’s origin, people were putting ingredients between bread. For crying out loud, Hillel the Elder started a passover seder sandwich by putting the paschal lamb between the matzoh. They just didn’t have a name for it like the English eventually did.

There are certain basic tenets to follow in the construction of a sandwich: it involves taking something from at least one of the four food groups and putting it between two pieces of bread. Unless it’s open-faced, which many say still counts. But this would then include pita sandwiches and tacos, and I don’t like bending rules (or bread).  A sandwich is meant to be a complete, portable meal. So let’s just go with two pieces.

The foods in the middle can vary by individual tastes, but usually they involve complimentary flavors: peanut butter and jelly. BBQ pork and celery root slaw. Bacon, lettuce and tomato. Chihuahua cheese and chicken mole. Beets and chèvre cheese.

It can be as tall as a Dagwood or an S.O.B., or as thin as a cucumber tea sandwich. Mayo is a good binding agent, as is guacamole. Brown is greater than yellow mustard. Watercress is greater than sprouts. A Cubano is greater than a panini. There are thousands of variations — and they are all good.

Everyone has a favorite; my personal is “Thanksgiving in a Sandwich.” Take sourdough bread and lightly toast. Lay down thick cuts of turkey breast, puréed cranberry sauce, and carmelized onions on one side. Smear whipped potatoes and a little brown gravy on the other. Combine.

I’ve had a lot of lousy or average sandwiches in my lifetime. There is some addictive drug in Jimmy John’s bread but the sandwiches overall are really just nourishment. The same feeling of just surviving happens when entering a Subway or Quiznos. 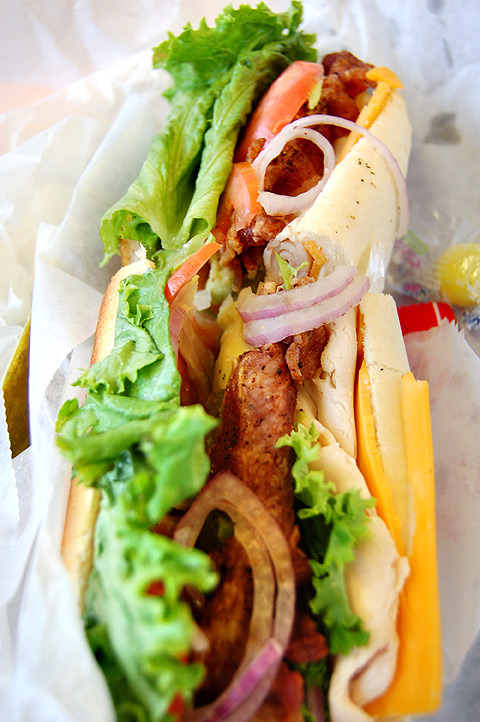 The Baron Rodgers, from Koppa’s Deli

I’ve had some extraordinary local creations. Remember the first time you had a Frukwine or a Cheesy Tomato? I do. I have dined with a buzzing in my ears at Jake’s Deli. I went blind with bliss partaking in a Portabella Philly at Nessun Dorma. I was struck dumb after eating a Muffaletta from Glorioso’s, but mostly from the peppers.

If you want to know where the best sandwich places are in the city, throw a rock. Milwaukee has long been in love with the sandwich, from Honeypie in Bay View to Benji’s in Shorewood. Re-read this article and click on many of the linked words for clues to some great locations.

Better yet, shop for your own ingredients and get out the cutting board and frying pan. There is nothing quite like a fresh loaf of artisan bread, cut thick, slathered with butter and sharp cheddar and then grilled and served with a bowl of tomato bisque.

0 thoughts on “Deep-Fried Romantic: In celebration of National Sandwich Day”