Where Should The Madison High-Speed Rail Train Station Go? 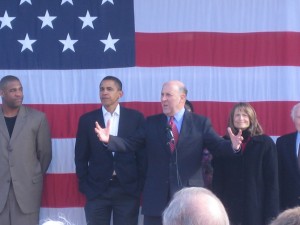 Jim Doyle and Barack Obama, the golden ticket to high-speed rail in Wisconsin?

Things look good for high-speed rail (110mph max speed) to be connecting Milwaukee and Madison courtesy of the American Reinvestment and Recovery Act.  The state has actively drafted plans for the route and conducted environmental assessments to put Wisconsin as close to first in line as possible if and when capital funding were to become available.  The stimulus package provides just the perfect opportunity.

While we won’t know if Wisconsin gets the funds until the final months of the year at the earliest, the announcement that Talgo will locate in Wisconsin and that $47 million in train equipment will be purchased from Talgo seems to indicate that Governor Doyle is either extremely confident we’ll get the money, or has received a verbal promise.

Milwaukee has recently invested in an excellent, centrally-located intermodal station that will provide an excellent hub on the line.  The Milwaukee Intermodal Station itself is near a number of bus transit routes, will likely be served by the coming streetcar, and is even within walking distance of numerous destinations.  It also features a lot of available, low-cost parking, which encourages many to take the Amtrak Hiawatha to Chicago from further off neighborhoods and suburbs.  Also important, the development potential of the site is limited only the looming presence of Interstate 794, something that eventually be overcome. 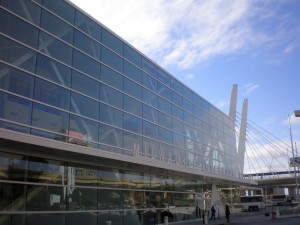 The Milwaukee Intermodal Station is a welcoming hub for transit in Milwaukee.

What does Madison have?  Well at the moment, nothing.  The plan is, however, for the stop to be located at the Dane County Airport in Madison.

What does the airport provide in terms of opportunity?  For starters at least a $12 cab ride to the Capitol.  Sure it provides parking, but at a cost greater than the parking in an urban location in Milwaukee.

There are few to no development opportunities at the airport itself, which of course enforces building height restrictions.  The proposed station site is a big parking lot shared with the airport that can never be developed, and it is constrained by a creek and other wetlands. Without connections to an urban context or a street grid, walking to the station will never happen, and taking a bus isn’t much better. The current single bus route that serves the airport  requires a transfer at Madison Metro’s North Transfer Point to reach downtown.

Thankfully Madison-based urban planner Barry Gore provides a voice of reason and compromise between the WisDOT recommend to build the station on the mainline track at the airport versus bringing the train down Madison’s isthmus.  Gore advocates for placing the station at Burr Jones Field. This location, near the intersection of First Street and East Washington Avenue provides roughly 950 feet of undivided land stretching over to East Johnson Avenue, which he claims is enough to site the 600-foot-long station platform.  The site seems to be a logical compromise between an expensive downtown Madison station, and the remote Dane County Airport station, the Burr Jones Field stop, in-between Washington and Johnson on First Street, presents a wealth of opportunity.

Before diving into why Gore’s Yahara Station idea appears to make a lot of sense, it’s important to understand why an urban location was passed over in the first place by WisDOT.

1. Cost – A significant amount of track would have to be rebuilt to build a station closer to the Capital Square near the Monana Terrace convention center.

2. The fear of back tracking – With the of the Midwest Regional Rail Initiative proposing to have a line from Chicago to the Twin Cities, going too far into the isthmus would require back tracking out onto the mainline, possibly adding twenty minutes to the trip.

The Yahara Station addresses those points and more.  The station wouldn’t require any back tracking, as the station’s location is on the track to go to the airport.  In fact, Yahara Station’s location is 3.4 miles closer to Milwaukee, and correspondingly 3.4 miles closer to downtown Madison.  According to Gore, if six trains run between Madison and Milwaukee a day as proposed the milage savings are incredible: Out to the airport and back is twice 3.4 miles, or 6.8 miles on every trip, 40.8 miles a day, 285 extra miles a week,  1244 miles a month, and 14,892 miles a year.  That’s before considering the savings on buses, taxis, and personal automobiles driving to and from the site.  Also considerable savings would be found in seven fewer crossing signals being forced to come down and block traffic on the train’s route to and from the airport. 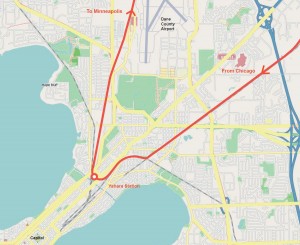 The route into Madison the train would take with either proposal.  The turning point is the proposed location of Yahara Station.

Short term cost savings are found at Yahara Station by shaving off 3.4 miles of track that need to be rebuilt. Keep in mind that there isn’t station at the airport currently either, so both stations would require new construction costs.

Transit access is far superior at the Yahara Station site, with 14 bus routes within a block of the proposed station, and eliminating the need for a transfer to get downtown.  The station is within cycle range of the UW campus, and offers a much cheaper cab ride to downtown.

The development potential of the Yahara Station site is nearly unlimited, compared to that of the airport site.  There isn’t much around the site at the moment, but that isn’t a bad thing.  Furthermore the developable parcels nearby would provide ample opportunity for firms looking to add locations in Madison to locate offices, as well as a logical spot to continue condo development as it spreads out from downtown.  Perhaps most importantly to those that would drive to the station, the currently under-utilized land would drive parking costs down for those looking to drive to the train. 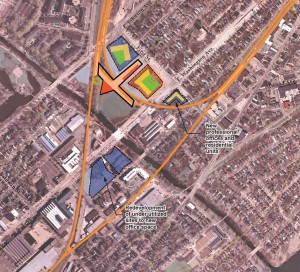 Orientation of the station as well as likely land to be developed is pictured.

What’s the hold-up with what seems such a logical plan?  The proposal by Gore came late in the process, and WisDOT is reluctant to change their plan in a way that might jeopardize the potential $500+ million in stimulus dollars needed for the project. Gore understands the timing issue, but doubts that such a change would jeopardize the funds.

A simple compromise seems to be take the clearly better station as a back-burner plan, get the funds from the stimulus dollars, and then change the plans during the final design process.  At this point no construction documents have been prepared for the project.  Scared of the federal government taking the funds?  Look at how long Milwaukee has held onto $91.5 million, which was originally $289 million for bus lanes on the interstate.

The airport plan will certainly hurt ridership on the line, and it’s fortunate that such a opportunity has presented itself in the Yahara Station to fix the potential misstep by WisDOT.

Why It Matters to Milwaukee

Why does this matter to Milwaukee?  The station’s location significantly affects the mobility of travelers from Milwaukee and Chicago upon arrival in Madison.  A more central location affords flexibility for spouses to work in different cities, greatly increasing the number of available jobs.  It allows students to more reliably get from one city to the other. A downtown-to-downtown connection also greatly increases the ability for businesses to collaborate and grow in both cities.

If you’re still not convinced, enjoy this story.

President Barack Obama, fresh off a narrow re-election victory over Sarah Palin, is celebrating the opening of new Amtrak service between his hometown of Chicago and Madison.

Obama is riding with Gov. Jim Doyle and Mayor Dave Cieslewicz as the train rumbles past East Towne and under Wisconsin 30 and starts across East Washington Avenue.

“There’s the Capitol,” says Obama, looking out the window of a new Spanish-built Talgo passenger car. But instead of slowing, the train sweeps around the corner at First Street and starts heading back out of town.

“Wait a second,” says the confused president. “I thought you promised we’d stop in Madison for a beer?”

“We will eventually stop, Mr. President, but the new Madison train station is actually out at the airport,” an embarrassed Doyle explains. “We’ll have to get a ride back into town.”

“Forget that,” says Obama, grabbing his briefcase and ordering the engineer to stop at East Johnson Street. “I’m thirsty. You airport guys can meet me later.” 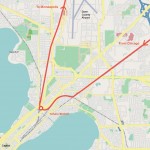 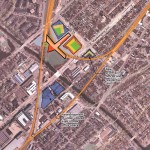 Orientation of the station as well as likely land to be developed is pictured. 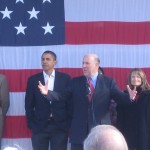 Jim Doyle and Barack Obama, the golden ticket to high-speed rail in Wisconsin? 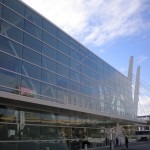 The Milwaukee Intermodal Station is a welcoming hub for transit in Milwaukee. 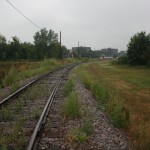 The tracks as they turn through Burr Jones Field. 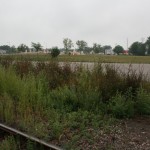 Land that may need to be partially claimed for a station platform. Clearly underutilized as its currently configured. 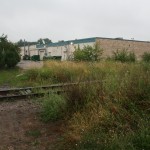 The land where Yahara Station would go.

50 thoughts on “Where Should The Madison High-Speed Rail Train Station Go?”