A new space, a punk populist spirit, and hot vocalists

Bill Florescu is looking out the window from his office on Water Street.

“I brought my Vespa today, so it’ll probably rain,” he states flatly.

The General Director of the Florentine Opera in Milwaukee isn’t usually worried about the weather interrupting a performance; the regular three opera season is staged inside the Marcus Center for the Performing Arts, with occasionally partnerships at the Pabst Theater and the Courtyard series at the Italian Community Center.

But the summer-bridging six-part recital held between seasons at Alterra on the Lake’s courtyard — which is free, and increasingly popular — is contingent on the weather. Today is another Thursday in which featured divas will perform excerpts and Florescu will introduce them.

Until now, Wisconsin’s most storied opera company — one of the oldest in the country — didn’t have a real shelter, either. Rehearsal time for shows, the hand-picked studio artists, and programs like its youth outreach (Inside Out) were parceled out when a venue had space and time available. Costumes and props were kept in storage areas, and the administrative offices downtown became a catch-all for various departments. That will change in September with the opening of The Wayne and Kristine Lueders Florentine Opera Center in Riverwest.

The story of how Florentine Opera leased this luminous practice space for performers and stage crew use is a serendipitous but patient one. While they had discussed the option of finding a space for a couple of years, it didn’t seem like a prudent idea during a time when arts groups struggle with the economy and funding.

“In a year in which cutbacks are often being made, we felt that we couldn’t ask people to take a rate cut and then put [a full-time space] on the budget,” Florescu says.

So how did it happen, then? The new center is a classic Cream City brick building that board member Catherine Constantini and her husband Mario owned. The tenants moved out suddenly, and it was a perfect space. The owners agreed to whatever alterations Florentine Opera needed.

According to Florescu, having this space at this time was important to them for a specific reason: “Something intangible in all this … is that opera is viewed as an elitist product. So we take our outreach very seriously, we take seriously what we do here. It’s hard to put a tangible face on that.”

Although the headline “punk populist” is a bit tongue-in-cheek, Florescu describes the roots of opera being originally written as a form that sided with the people and rebelled against established ways. Verdi was considered revolutionary, and often operas were funded by intellectual radicals. If you look at this year’s roster for example, Tosca is about a fleeing dissident, a passionate artist and some wild love. Rigoletto is about a lothario, his hunchback comedian conspirator and a mystery sack.

In the news release about the Riverwest space, Florescu clarifies that “this new location will allow us to take an important and much needed step toward deeper engagement and expanded presence within our community.”

Florentine’s members believe the space could help change the image of opera and open up new doors. For his part, it was Board President Wayne Lueders who was key with a valedictorian gesture to financially afford the space. There will be other program funding and naming opportunities for grand pianos, makeup, costuming and the like,but the center will bear the opera enthusiast’s name.

In that same news release, Lueders noted that “in recent years, the Florentine has made great production strides forward from the magnificent Aida to Erika Sunnegardh’s great performance in Salome to this year’s innovative production of Handel’s Semele and the all-Florentine directed, conducted, and staged The Magic Flute. The Opera Center and the possibilities it opens up to the Florentine is another important step forward.”

On the wall of the round table that Bill Florescu sits at in his office is a large photo of 2005’s production of Aida. There are scores of cast members fully costumed on different stage levels. It is epic and it is spectacle, and the first show Florescu says he inherited when coming aboard. It seems a long time ago that such a production could happen and perhaps break even, but that doesn’t mean an end to a creatively lavish production season.

Florescu points out that opera is expensive, which is why a show’s run is so brief. But he also cites many factors of synergy, such as partnering with Marcus and the Milwaukee Symphony Orchestra, that help. Technological marvels this season will feature multimedia aspects and radical production designs. Finally, there has been a renewed interest in opera; Carly Simon, Rufus Wainwright, and Don Davis — who will come again in a moment— all have worked on operas recently and adaptations of Dead Man Walking and Angels in America elsewhere have proved the genre is still vibrant.

Florentine will also see an influx of new opera coming through this season and leading off the next one. After the November 2009 performance of Puccini’s Tosca, Milwaukee will next showcase Elmer Gantry, a relatively new American opera based on the satirical Sinclair Lewis story about a fraudulent, womanizing evangelist. The opera  languished after being workshopped many years ago and was abandoned until the Nashville Opera permiered it in 2007. Florentine’s production appears to be only the third time it has been fully staged.

It appears to be a most interesting work as well, in part due to its creators’ description: “The music for Elmer Gantry places traditional operatic forms – arias, duets and large ensembles – into a boldly American, vernacular, and ‘roots’-based musical language. Original hymns and gospel choruses help to tell this quintessentially American story of religion, love and corruption.”

Florentine will continue the spirit of “out of the box performances” with the world premiere of composer (Matrix films, Behind Enemy Lines, TV’s Beauty and the Beast) Don Davis‘s first opera Rio de Sangre to open the 2010-11 season. The closest the organization has gotten to premiering new work in recent history was the American premiere of Picture of Dorian Gray in 1999. There is a ‘new works’ fund that Sangre will be logistically planned from, and the buzz is high.

Much of the modern buzz is the result of opera groups like Florentine using new media to its full advantage. They blog, tweet, Facebook, and stay connected instantly. Last year’s Semele was so popular the show had scalpers. There is a connection that Florentine wishes to maintain with the core, established audience base while striving for growth. A kind of mantra Florescu repeats is to “stretch without alienating.”

The Florentine is also set with its 2009-10 resident artists, who will be the first to use the new space in a few months. The four will make the transition from student to professional with the help of from local and national art grants. The Studio Artist program offers its singers the chance to appear in supporting roles during the regular season, but also to learn and practice outreach. To that end, Florentine also announced that January 2010 will start this season’s childrens opera program with Jack and the Beanstalk. Studio artists and others travel to participating schools and engage kids in “a multi-disciplinary format” to learn more about opera.

But the best sampling of work, presented in a relaxing format, has to be the Alterra on the Lake series. First of all, the four featured singers, all women, are incredibly beautiful and wear fashionable summer dresses. The rainy weather has moved on, but still it’s hot; the singers are figuratively and actually hot while busting out some major chops that could make an American Idol contestant cower. It’s a strange turn from the expected: it’s not in a dark, cavernous space. There is no fat lady wearing a valykrie outfit. There is still a language barrier (most official shows have English translations projected above the stage), but no lack of emotion without the context of knowing what the libretto means. If anything, it’s uplifting AND crushing. You don’t know what you feel, and in the modern world, that’s an unfamiliar thing.

Photo Gallery from July 23 Florentine at the Lake event: 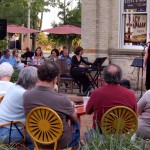 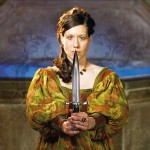 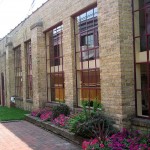 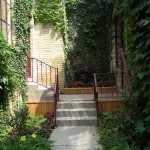 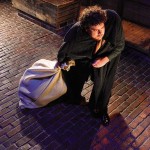 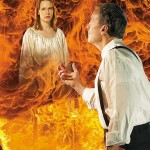 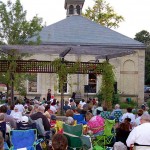 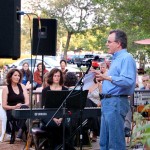 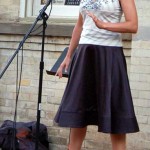 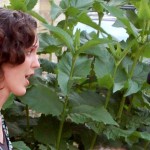 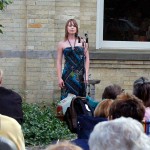 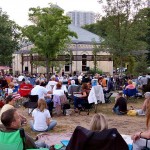 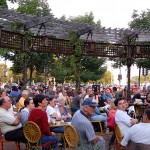 0 thoughts on “A new space, a punk populist spirit, and hot vocalists”