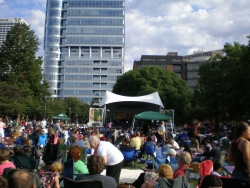 The stage is in place.  The vendors are setting up.  Metro Market is soon to be buzzing with shoppers.  Friends and neighbors are preparing to skip out of work a little early, run home grab the chairs, a bottle of something, and head to Cathedral Square Park.  Yes, it’s opening night at Jazz in the Park, kinda.  Because that is how it use to work.  Today used to be one of my favorite days of the year, but as East Town has yet to back off their position of no longer allowing alcoholic carry-ins into the festival, things aren’t quite in order for the start of festival season.

I know this seems like a pretty minor issue, that’s hardly newsworthy, but to many Milwaukee residents this new policy reduces a great East Town event.  In fact there’s been talk on various Milwaukee email lists of boycotting Jazz in the Park until the rules regarding carry-ins are changed and I’ve joked about holding alternatives events, but the truth is the party will go on, just not in quite the same manner.  Really, who hasn’t snuck a flask into a football game or hidden a beer in their jacket, so surly people will find a way to continue to bring their own.  A local liquor store is even selling a product called Pocket Shots with Jazz in the Park specifically in mind, but this misses the point because this event isn’t a football game.

The point isn’t that people can drink or not, they still can.  It is about the random gatherings that occur over a bottle of wine or twelve pack of Miller, and the characters that make it unique and interesting.  I think of Downtown Diamond Dave and his “Brooklyn cooler,” a Walgreen’s bag, twelve pack of beer, and some ice.  Or the monster martini glass guy, who’d wander the square sipping on his martini.  I think of the experiences had and relationships built without out a plan, without effort, simply by reaching in the cooler and saying “want a beer?”  Yes, there will still be music, and there will of course still be people sitting out, but until State Rep. Leon D. Young‘s (D-Milwaukee) legislation makes it to Governor Doyle‘s desk, it’s likely that many will head straight for Taylor’s skipping the park all together, and that’s a shame.
Categories:

4 thoughts on “Jazz in the Park Starts Today, Kinda”