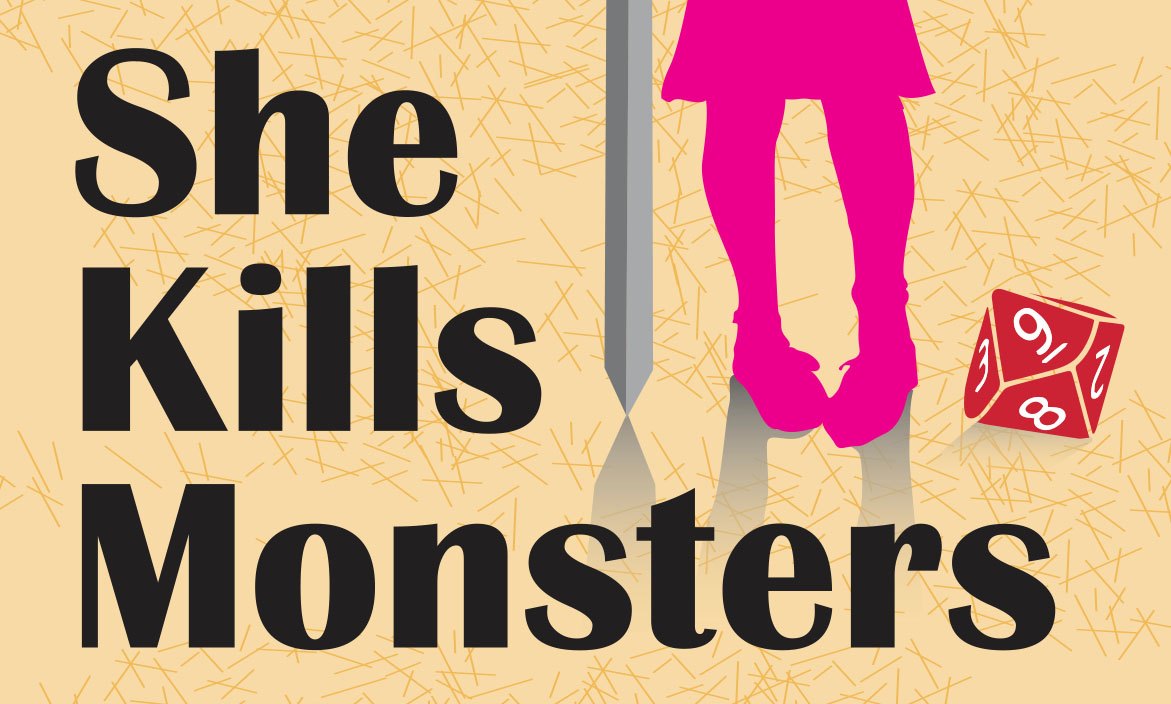 The Village Playhouse presents a comedic romp into the world of fantasy role-playing games with their upcoming production of She Kills Monsters opening Friday, February 10, for a three-week run at Inspiration Studios, 1500 S. 73rd Street in West Allis.

Qui Nguyen’s fantastical comedy details the quest of Agnes Evans (played by Lauren Heinen), a high school teacher unable to quell her grief over her younger sister Tilly (Andrea Roedel-Schroeder), who died at 15 in a car crash in which their parents were also killed. Finding the playbook Tilly created for her deep involvement in Dungeons & Dragons, Agnes persuades a student to preside as dungeon master and allow Agnes belatedly to enter Tilly’s fantasy world.

“I’ll admit, before taking on this show, I knew next to nothing about Dungeons & Dragons,” says Director Maria Pretzl. “I was much like our protagonist when confronted with some of the play’s monsters. My mental image of a Bug Bear was a grizzly bear with antennae and beetle wings. I was quickly corrected. But there is more to this show than monsters. Although it is set in a fantasy world, this show is really about the bond between sisters.”

“Coming into this theatre, I thought I would be just an actor,” comments Paul Zaragoza, the show’s Producer. “Little did I know, I would become engrossed with learning more about the world of Dungeons & Dragons. I am very new to this world. Like our director, I came from Yu-Gi-Oh but started piecing things together and creating characters that someday I might want to portray.”

Many newcomers to the Village Playhouse stage bring varied experiences from near and far to join the journey into this world of medieval combat, complete with ogres and monsters.

Matthew M. Collie is new to Wisconsin, making his Village Playhouse debut after being credited with performances at Sunset Theatre and several theatre productions in Fargo, North Dakota.

A huge on-stage dragon, created by designers Derek Jacobs and Melody Lopac, is guaranteed to impress the audience.

Prop Master Moondancer Drake, created a myriad of hand-made battle weapons reminiscent of a long-gone era, including axes, bows, spears, gauntlets, and daggers. They add to the intricacies of the fight choreography staged by Tawnie Thompson who holds several certifications after studying stage combat for the past four years.

She Kills Monsters is a high-octane, dramatic comedy laden with homicidal fairies, nasty ogres, and 90s pop culture.  It tells the story of a young woman who loses herself in a game in order to reclaim a long-gone loved one and offers a heart-pounding homage to the geek and warrior within us all.

She Kills Monsters runs February 10-11, 17-18, 24-25 at 7:30pm.  A 2:00pm matinee will be held on Sunday, February 26.  All performances at Inspiration Studios, 1500 S. 73rd Street in West Allis.  Tickets are $17 (adults) and $15 (seniors/students).  Group rate of $14 per person is available for groups of ten or more.  Seats may be reserved by calling 414 207-4VPW or by emailing shekillsmonsters@villageplayhouse.org.  Tickets are also available for purchase online at brownpapertickets.com.