Patricia Borger, who has served as UWM’s vice chancellor of development and alumni relations since 2008, has announced her retirement. Borger will stay on until January of 2022 to give the university time to hire her successor, who will lead its next fundraising campaign.

Borger leaves big shoes to fill. Her proudest accomplishment at UWM, the comprehensive campaign Made in Milwaukee – Shaping the World: The Campaign for UWM, shot well past its consultant-recommended goal of $175 million to raise $251 million by the time it wrapped up in 2019.

“It’s huge for the university,” Borger said at the time. “The gifts really touch every corner of UWM.”

During Borger’s tenure at UWM, she and her team have helped raise more than $360 million for the university. The contributions help pay for scholarships, facilities and professors to support the university’s dual mission of being both an access university for students and a top-notch research institution.

“UWM has a great story to tell,” she said, detailing some of the key factors that made the campaign a success. “Volunteer community leaders played an important role. A chancellor who communicates well that UWM is worthy of philanthropic support. Generous donors and a superb, hardworking, dedicated team. All of those came together.”

“She is among an elite group of leaders for her relationship building, strategy development, administration, and creation of innovative partnerships,” Mone said. “She is a smart, consummate professional who is highly effective at getting major projects visualized, organized and accomplished. There are few people besides Pat who could have maneuvered with such success through constantly changing and volatile environments to attain record-breaking levels of support for UW-Milwaukee.”

Before being lured to Milwaukee and UWM by then-chancellor Carlos Santiago, Borger spent most of her life and career in and near Cincinnati, Ohio. After earning a master’s degree from the University of Cincinnati’s College-Conservatory of Music, she stayed on for a decade as director of the college’s preparatory department, which offers performing arts instruction for children and adults.

Then, having developed an interest in law, she enrolled in law school in her late 30s and launched a second career.

“My work as a department head at the University of Cincinnati required me to work with attorneys, and I thought I was sorry that no one ever suggested that I look at law as a career,” Borger said. “And so I decided it’s not too late, I can still do this. … I’m so glad I did. It broadened my outlook and taught me a new approach to addressing issues.”

“I wish I’d found UWM earlier in my career,” Borger said. “It’s been a great fit for me. I love the mission of the university, the wonderfully supportive colleagues, the generous and caring donors, and I have a terrific team of development and alumni professionals. It’s a place where I felt like I could make a difference.”

Borger has made a big difference, Mone said. “I thank Pat for her 13 years of dedicated and extraordinary service and wonderful interpersonal skills – skills that have translated into elevated campus capabilities – and we wish we had found Pat earlier in her career, too!”

At UWM, Borger set to work building relationships and raising money. In her first year, she helped raise annual giving to UWM from $10 million to $15 million, then boosted it further to a consistent average of around $30 million per year.

She also led the university’s development and alumni relations efforts, served on the chancellor’s cabinet and helped cultivate a partnership with deans and others on campus in fundraising projects.

“Pat has built a strong team of highly talented, dedicated fundraisers who collectively punch above their weight,” Mone said. “Pat’s mentorship and career-building of others has enabled longevity across the Development and Alumni Relations division. We will miss Pat and extend the absolute best wishes for a long, fulfilling retirement.”

In retirement, Borger plans to return to her first love, music, by rebuilding her proficiency at piano, and to devote time to needlepoint, reading and volunteering. Meanwhile, she’ll be rooting for UWM.

“It’s a wonderful place,” Borger said. “I’m a first-generation college graduate. I truly believe higher education is transformative. I want others to have the same experience that higher education gave to me. That’s why I loved being at UWM so much.” 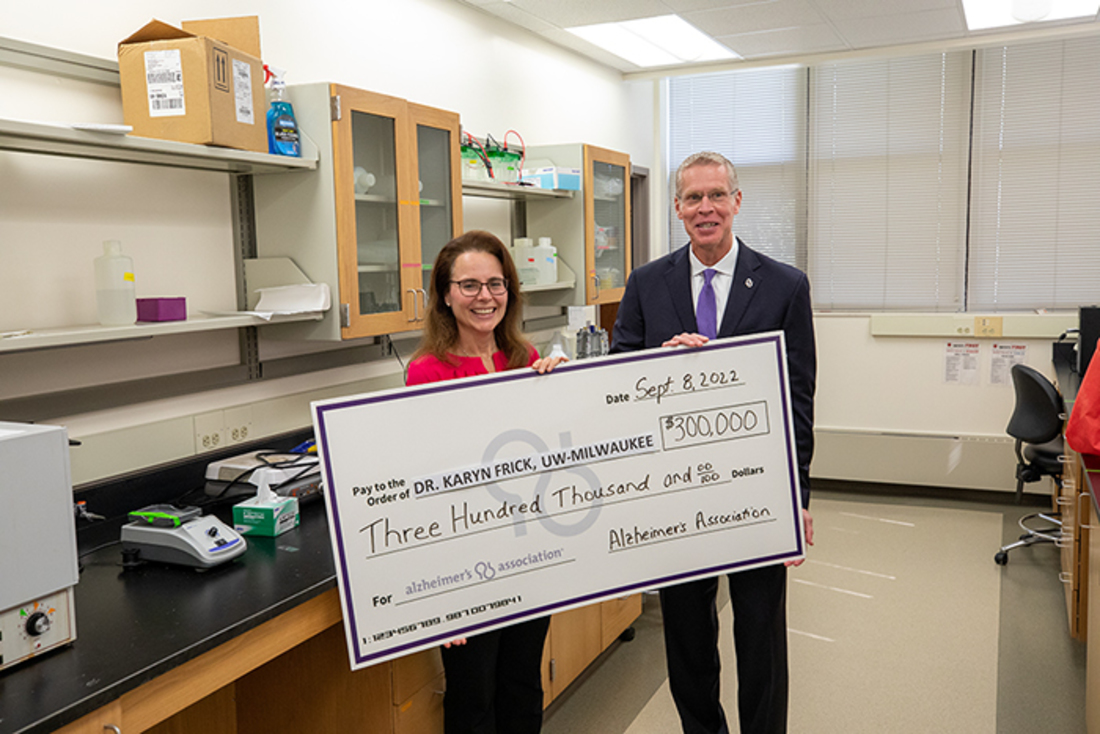 Sep 13th, 2022 by University of Wisconsin-Milwaukee

The role of estrogen in the Alzheimer’s puzzle

Aug 15th, 2022 by University of Wisconsin-Milwaukee

Aug 1st, 2022 by University of Wisconsin-Milwaukee