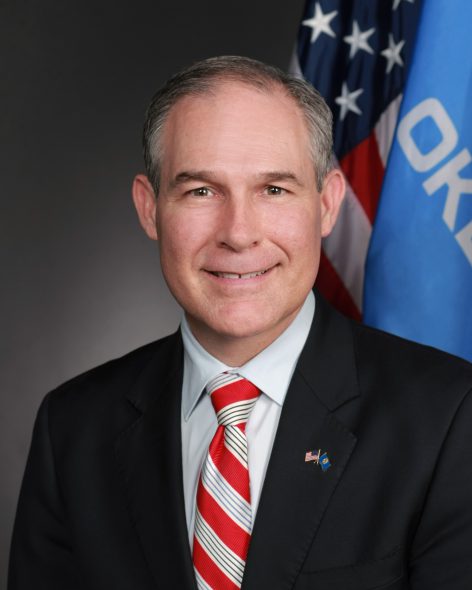 Scott Pruitt. Photo from the State of Oklahoma.

“In Wisconsin, we have a long and proud tradition of being a national leader on issues of our environment and conservation. Throughout our history, Wisconsin has been home to environmental leaders who have worked to pass on a stronger environment to future generations — Aldo Leopold, John Muir and Senator Gaylord Nelson, the founder of Earth Day.

“Let there be no doubt, global climate change is real. It is a fact and no ‘alternative facts’ can change it. The question is not whether climate change is occurring, but how our nation is going to take it on. America has made great progress over the last eight years with an Administration that has taken seriously a shared responsibility to pass on to the next generation a safer, healthier world. However, President Donald Trump’s pick for EPA Administrator, Scott Pruitt, is a science denier who would turn back the clock and dismantle much, if not all, of the progress we have made on clean air, clean water and protecting our environment.

“I cannot support an EPA nominee who refuses to see, and denies, the impact of climate change on agriculture, biodiversity, extreme weather and our Great Lakes. I am also very troubled by Scott Pruitt’s record of fighting for polluters and doing the least possible under the law to address these threats, especially at a time when we must ensure the health of our citizens is safeguarded from toxic hazards and our environment recovers from pollution.

“In Wisconsin, climate change is causing big changes in both the Great Lakes ecosystem and economy. Climate change has facilitated the growth of invasive species like Asian carp, which pose a major threat to the ecology and economy of the Great Lakes by devastating the food chain and causing major damage to our ports, pipes and water infrastructure. The Great Lakes are directly linked to 1.5 million U.S. jobs and $62 billion in annual U.S. wages, with many of these jobs in key industries that can be impacted by climate change. In Wisconsin, our natural resources support over $5 billion of activity in the state’s economy. According to the American Sportfishing Association, recreational fishing alone brings in $350 million every year to Wisconsin’s Great Lakes coastal communities. So preserving the Great Lakes is not just an environmental goal, it is an economic necessity.

U.S. Senators Tammy Baldwin and Marco Rubio Introduce Bipartisan Infrastructure Legislation to Make Sure it is Built to Last

One thought on “U.S. Senator Tammy Baldwin Announces She Will Oppose the Confirmation of Scott Pruitt for EPA Administrator”