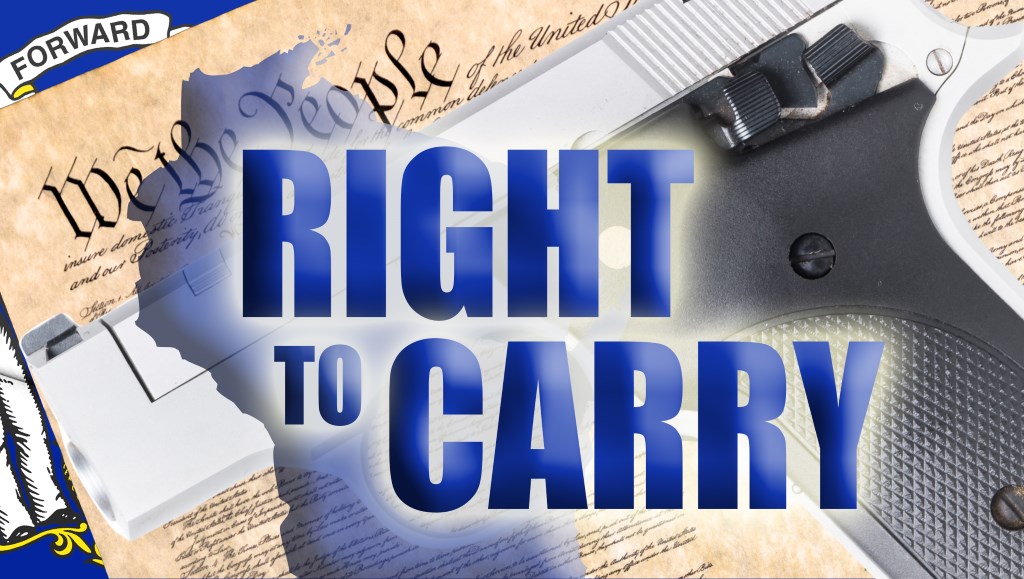 Madison, Wis. – Today, Senator David Craig (R-Town of Vernon) and Representative Mary Felzkowski (R-Irma) along with 39 co-authors released the “Right to Carry Act”, which simplifies Wisconsin law and expands the rights of law-abiding citizens to carry a concealed weapon without a license.

“At its essence, this bill does two things: removes barriers to the exercise of a constitutional right and simplifies the law,” said Senator Craig. “If you decide to carry a weapon to protect yourself or your family, you should be able to do so easily – without bureaucratic hurdles and without cost.”

“We want to empower people to decide the best ways to defend themselves,” said Representative Felzkowski.  “Whether it’s a taser in a purse or gun under a winter coat, we want to give more options for people to carry.”

“We already give people the ability to openly carry a firearm without a license. With this bill, law-abiding citizens will have the same right to carry discreetly that they currently have to carry openly,” said Senator Craig. “If you decide to throw on a coat, you should not be considered a criminal.”

The bill also clarifies and simplifies the carry of firearms in vehicles.

“In writing this bill, we found ambiguities in the law and ‘gotcha’ clauses which have tripped people up.  The simplifications in this bill will help citizens more easily understand the law and avoid getting wrapped up in a court battle for something that should be lawful,” said Representative Felzkowski.

The bill will also create a basic license that will allow parents to pick-up and drop-off their children from school without having to leave their firearm at home.  The bill maintains all local controls and private property rights by allowing the posting of schools, government buildings, and private property.

“Private property rights are extremely important,” said Senator Craig. “Our legislation does not diminish anyone’s ability to post their business and we uphold local elected officials’ ability to decide whether or not to post their buildings based on what is best for their community.”

The bill removes government red tape from self-protection and makes it more affordable to carry.

“Under this bill, if you are legally allowed to own a handgun, you can carry it concealed – no license, no fees, no government hoops to jump through,” said Representative Felzkowski.

“This bill expands freedoms and liberties for individuals and curtails the reach of unnecessary bureaucracy,” said Senator Craig.

“More and more people in Wisconsin and around the country, from all political stripes, are deciding to carry to protect themselves and their families. The desire around the country has been to restore 2nd Amendment rights for law-abiding citizens. It is time for Wisconsin to honor that constitutional right and give freedom back to our citizens,” said Representative Felzkowski and Senator Craig.

Statement on Extension of “Shelter-in-place” to May 26th

Sen. Craig: “Evers and Palm have gone too far! The Senate must reject Palm now!”

Madison, WI — Today, State Senator David Craig (R-Town of Vernon) released the following statement relating to Governor Tony Evers’ Shelter-in-Place Order: “A decision of such magnitude like a ‘shelter-in-place’ order, regardless of what the government calls it, should only be established through the surety and specificity of an act of the legislature because of its extreme effects on Wisconsin families and businesses. Such action could stem the tide of confusion and anxiety being experienced by employers and employees all across the state. “Further, Governor Evers needs to articulate the specific information he received which caused contradiction between his Friday statement ‘I believe that we’ll be able to avoid [a shelter-in-place order]’ and today’s statement that he will make such an order effective tomorrow. “Additionally, last week I requested the Governor and Attorney General provide details as to how the government’s actions abide by the constitutional strict scrutiny that is required. Their continued silence on these issues is unacceptable given the precipitously negative impacts on civil rights and the economy. “Because of the Governor’s extreme step, I believe the legislature should consider the following protections for Wisconsin citizens: Require legislative approval of any statewide “shelter-in-place” order for reasons of pandemic or infectious disease Require legislative passive review of any “Emergency Declaration” after 30 days, with affirmative approval needed for a state of emergency lasting longer than 60 days Require a written report detailing the satisfaction of strict scrutiny concerns be given to the legislature prior to a ban of gatherings of 50 or fewer is to be in effect Require an immediate report to the legislature of arrests for mass gathering violations “The constitution was not designed to be disregarded in a time of crisis, in fact, it was specifically designed to be most valuable and applicable during times of crisis when liberties are most at risk.”

“Republican legislative majorities will continue to take a commonsense approach and govern responsibly by limiting government overreach while supporting a free-market economy, which is the very recipe that has led to one of the most prosperous decades in state history.”