According to the NBCCC, black catholic history began with the Acts of the Apostles. During the transatlantic slave trade, French and Spanish missionaries ministered to both free and enslaved African populations which was the foundation for Black Catholic communities within the United States.  Today, there are nearly two hundred million people of African descent in the Roman Catholic Church throughout the world.

Representative Myers said, “Acknowledging the contributions of blacks in the catholic church is a quintessential part of not only church history, but world and American history too. Wisconsin’s humble beginnings as a French trading post brought with it Catholics who settled in our state. Solomon Juneau, who founded the city of Milwaukee, brought with him his personal cook, Joe Oliver, who is believed to have been of the catholic faith.”

By acknowledging Black Catholic History Month Representative Myers hopes to create opportunities for the public to be educated about the church’s role in the African diaspora as well as bring awareness to the lack of black American representation in the canon.  Myers stated, “While there are roughly thirty-one catholic saints of African descent, none are African-Americans; celebrating Black Catholic History Month is the perfect time for Wisconsinites to learn about the six African-Americans who have open causes for canonization by the church.”

The six African-Americans who are currently considered for sainthood include: Augustus Tolton, the first African American priest in the United States; Mary Lange, founder of the Oblate Sisters of Providence, the first order of black nuns in the U.S.; Henriette Delille, founder of the Sister of the Holy Family, the second order of black nuns in the U.S.; Pierre Toussaint, an entrepreneur, whose benevolence helped create the first catholic school for black children in New York City; Julia Greeley, a formerly enslaved woman, whose work on behalf of the indigent aided many during Reconstruction; and Sister Thea Bowman, a renowned educator and member of the Franciscan Sisters of Perpetual Adoration in LaCrosse, WI.

Rep. LaKeshia Myers Issues a Statement Regarding the Active Shooter at MillerCoors in Milwaukee 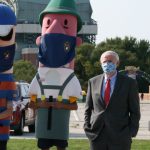 Biden Up 5 Points in Final MU Poll by Laurel White