"The Dark Store Loophole is wrong, and we need to close it."

MADISON – Yesterday, Governor Tony Evers announced his plan to close the dark store loophole in the 2019-2020 biennial budget. The “Dark Store Loophole” shifts tax burdens away from large companies and onto the shoulders of small business, families and individuals.

Through the Dark Store Loophole, big box retailers are allowed to base their tax assessments on their value as a vacant store rather than a store in operation. Corporate retailers then save millions of dollars in taxes while shifting the property tax burden to residential and small business taxpayers. Attached is a graphic showing the real life examples in Wauwatosa.

Despite having the majority of the Assembly signed on as co-sponsors of the legislation in the last legislative session, Republican leadership blocked attempts to bring the bill to the floor.

“The Dark Store Loophole is wrong, and we need to close it. The hard work and bipartisan support on this issue has been accomplished.

I applaud Gov. Evers for stepping in and using the power of his budget to close the loophole, relieving small businesses and families and individuals, as well as local municipalities, from an unjust tax burden.

This comes as a tremendous relief to my district. Knowing the burden our local municipalities have suffered, I reached out yesterday to local elected officials in the district to comment on the issue and received positive responses.”

“As Mayor of Wauwatosa, I am very pleased Governor Evers’ budget will include a proposal to close these loopholes. This is an issue that has negatively impacted communities of all sizes throughout this state shifting the tax burden to smaller businesses and homeowners. Closing the loopholes has bipartisan support and should be a nonpartisan issue.”

“The Wisconsin state government must act to close the ‘dark store’ loophole to prevent a disproportionate share of the real estate tax burden from being shifted from large national retailers to small business and residential property taxpayers.  I support a fix for this problem being included in the state budget.”

“As you can see from the concert of Mayoral praise, applause is due for Gov. Evers for proposing a final closure to this loophole. Tax refunds of this magnitude caused by the loophole would devastate our communities, leaving less funding for schools and city services. Closing this loophole is a win for the people of our district, and the state of Wisconsin. Thank you, Gov. Evers!” 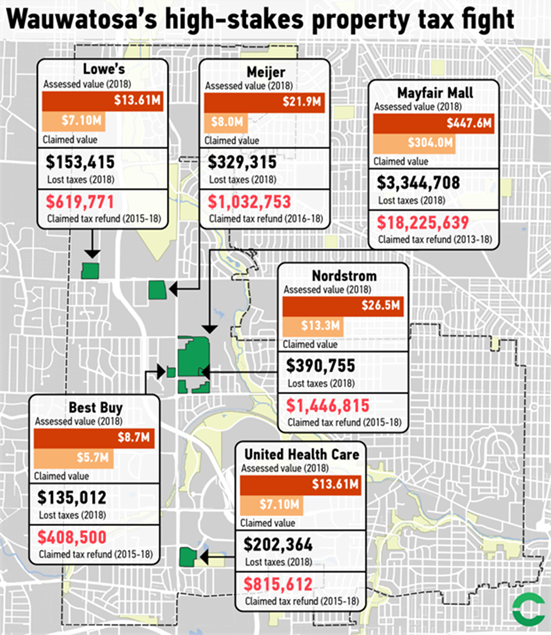