Tickets On Sale to the General Public Starting March 30th 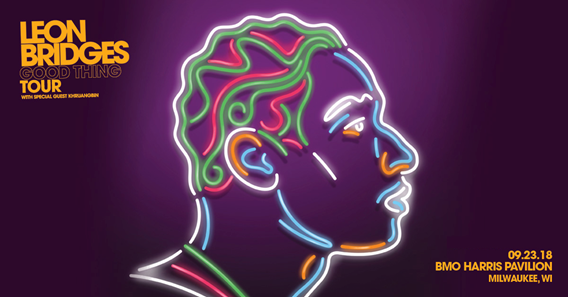 Grammy Award nominated R&B recording artist and songwriter Leon Bridges has announced his 2018 headline tour, Good Thing Tour. Leon is touring in support of his forthcoming sophomore album, Good Thing, out May 4 (pre-order here) via Columbia Records.  He will make a stop in Milwaukee at the BMO Harris Pavilion with special guest Khruangbin.

Leon, a trained choreographer, has long been celebrated for his live show, which couples both his and his band’s full scale musicianship with his use of dance and motion. Since the release of his debut album, Leon has performed all over the globe, including at The White House for President Obama, The Library of Congress, The Museum of Modern Art and multiple major festivals. Intense demand to see the Leon’s live show has been triple fold since the announcement of his forthcoming album Good Thing, which releases globally on May 4. Listen to Leon Bridges new tracks “Bet Ain’t Worth the Hand” & “Bad Bad News” here.

Tickets can also be purchased at the Summerfest Box Office in person, Ticketmaster Ticket Centers, select Walmart stores, and by phone at 1-800-745-3000 (live Ticketmaster agent) or 1.866.448.7849 (“Ticketmaster Express” automated phone line).  Patrons may also utilize “ticketfast” at Ticketmaster.com to print barcoded concert tickets from home.  Convenience fees may be added to all purchases.

Milwaukee World Festival, Inc. is an independent, private 501(c)(3) corporation founded in 1965 that produces Summerfest, presented by American Family Insurance, an 11-day festival that generates approximately $181.3 million in direct and indirect economic impact for the community each year.  Milwaukee World Festival, Inc. also maintains Henry Maier Festival Park, located on 75 acres on the shores of Lake Michigan in Milwaukee, WI.  In addition to Summerfest, Henry Maier Festival Park hosts a variety of ethnic and cultural festivals, concerts, walks, runs, and other special events, attracting nearly 1.5 million people. The mission of the organization is to promote an understanding of different ethnic cultures, the histories and traditions of various nationalities, harmony in the community, civic pride and provide a showcase for performing arts, activities, and recreation for the public and employment opportunities for the youth of the community.