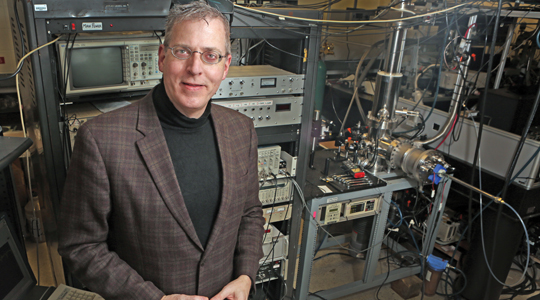 MILWAUKEE — A classroom centered around students — and not the professor —may help first-year chemistry students who otherwise would achieve lower grades, according to studies from Marquette University researchers.

Dr. Scott Reid, professor and chair of chemistry at Marquette, found that the number of students who received grades of D, F or who withdrew from class dropped 56 percent in the “flipped classroom,” as compared with a traditional lecture. This is notable, as chemistry courses have some of the highest first-year rates of students receiving Ds, Fs and withdrawals, according to Reid.

“The flipped classroom helped students in the bottom demographics; those at risk who may have failed to pass the class,” Reid said. “Well-prepared students are going to succeed using either approach.”

The flipped model approach pushes lecture content out of class, often using short video lectures and quizzes. Face-to-face small group discussions focus on problem solving and application, with the professor acting as a guide. Students were given the choice of a flipped class, or traditional lecture-based classes taught in a lecture hall.

The study co-published with Marquette Professor Emeritus Michael D. Ryan in the Journal of Chemical Education found there was no overall difference in exam performance among students between the flipped and traditional lecture-based sections. However, students who fared lowest in a pretest did better on exams if they were in the flipped classroom. In addition, students evaluating the courses had more satisfaction with the flipped classroom than the lecture hall classroom, the studies found.

The year-long parallel study followed students in a non-majors general chemistry course. Five common exams were given to each group and Reid said there were some potentially important factors that led to the study’s conclusions.

“There was increased student/instructor interaction, and a mitigation of the amount of poor note taking through the availability of on-demand, self-paced lectures and a more effective engagement with the lecture material,” he said of the flipped classroom. “The students could match their pace with their attention spans and decide when to watch the lecture.”

The second study, published in July in the Royal Society of Chemistry, showed that the flipped concept could be scaled up to a larger size (144 students in two sections), while keeping discussion sizes at 24 students and repeating the successes found in the first study.  This study also found potential for a four-hour flipped blended lab/discussion as a potential meeting pattern.

In the future, Marquette’s Chemistry Department plans to continue to offer flipped classes in response to student interest and demand.

“Simply stated, the goal of the flipped classroom is to increase student engagement and ownership of their learning,” Reid said. “We want to use this approach to benefit students as best we can.”