Up to 40% off Festival Passes and ticket 6-Packs 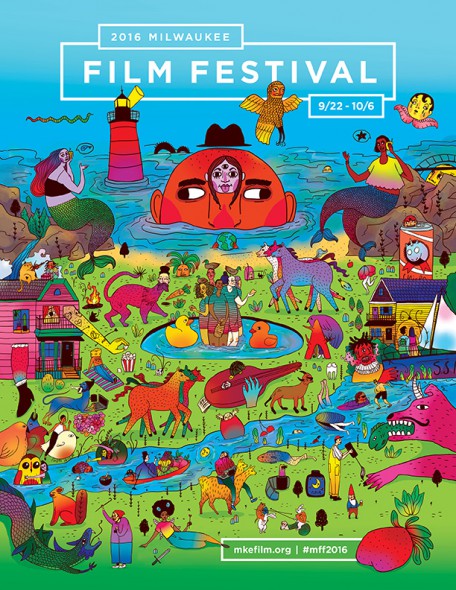 “With Milwaukee Film’s blessing, I went on the hunt to find some local illustrators for this year’s campaign. There is truly so much creative talent in this city,” explained Brautigam. “When I found Gabriela’s work, I was literally blown away. And working with her was equally great. She understood the direction I wanted to take this year’s campaign art, and she delivered above and beyond my expectations.”

“The Milwaukee Film team—and especially Cathy—was very supportive in giving me a lot of creative freedom with this year’s campaign poster,” said Riveros. “I was able to stay true to my style and incorporate inspiration from culture, the past, and art history. The end product depicts the wild side of Milwaukee, with inspiration from Hieronymus Bosch’s famous painting The Garden of Earthly Delights.”

The campaign art reveal coincides with passes and ticket 6-Packs for the 2016 Milwaukee Film Festival going on sale. Now through June 9, passes and 6-Packs boast the biggest discount of the season, with Milwaukee Film Members earning an additional discount as part of their member benefits. (Non-members who join are able to immediately enjoy the additional discounts. Simply sign up at mkefilm.org/membership.) These discounted passes and 6-Packs are available online only.

6-PACKS
For Milwaukee Film Members: on sale for $45 (regularly $60)
For everyone else: $60 (regularly $72)
For a complete list of pass, 6-Pack, and individual ticket prices, as well as a breakdown of the discount deadlines, visit mkefilm.org/tickets.

About Cathy Brautigam / Lone Shoe Graphics
For nearly four decades, Cathy Brautigam has lived in and loved everything about Milwaukee. A graduate of University of Wisconsin-Milwaukee with a degree in art education, Cathy began her career in graphic design doing work for major international corporations at two large Milwaukee ad agencies. After a few years of feeling lost in the corporate world, she found solace in the non-profit sector designing to promote good, not goods. This led to her taking her more than a decade of experience to establish her own design shop, Lone Shoe Graphics. Working alongside her awesome dog Alice, Lone Shoe’s client list boasts a number of local staples, including Milwaukee Film, 91.7 FM WMSE, and Milwaukee Public Libraries. Cathy is a proud member of Local First Milwaukee, AIGA, and Adworkers Milwaukee, and also appreciates a good brownie. Explore her work at loneshoegraphics.com.

About Gabriela Riveros
Gabriela (Chanchita) Riveros is a Paraguayan-American illustrator based in Milwaukee, WI. A 2016 graduate of the Milwaukee Institute of Art & Design, Gabriela’s work is heavily inspired by both culture and history. Her client list includes the Milwaukee Institute of Art & Design, Colectivo Coffee, Café Corazón, Redline, and Paraguayan band Pirakutu, among others. Explore her work at chanchitariveros.com.

About Milwaukee Film
Milwaukee Film is a non-profit arts organization dedicated to entertaining, educating, and engaging our community through cinematic experiences. In addition to our annual 15-day Milwaukee Film Festival (Sept.22 – Oct.6, 2016), Milwaukee Film provides a number of year-round opportunities for film lovers, filmmakers, and educators. For more information, visit us online: