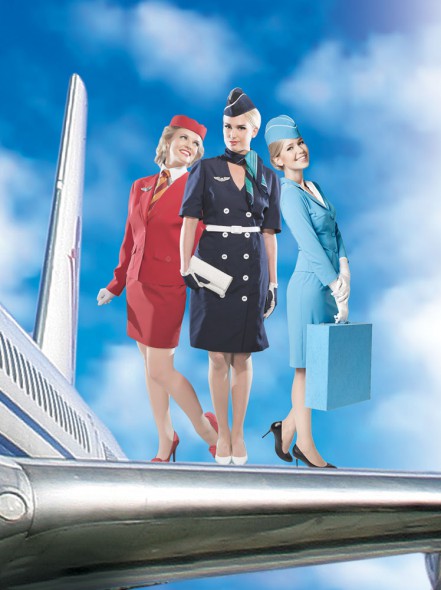 Milwaukee, WI. … Fasten your seatbelts for a hilarious journey back to the swinging ‘60s in BOEING BOEING, August 13 – 30, 2015. Milwaukee Chamber Theatre kicks off its 2015-2016 Season with this Tony Award-winning farce by Marc Camoletti, under the directon of Michael Cotey. BOEING BOEING performs in the Broadway Theatre Center’s Cabot Theatre in Milwaukee’s Historic Third Ward.

In BOEING BOEING, swinging bachelor Bernard is living the high life in Paris, bouncing from one beautiful stewardess to another. But all his careful planning goes out the window when an old school chum from Wisconsin and all three “fiancées” arrive in town simultaneously.

Marc Camoletti’s BOEING BOEING opened in Paris in 1960, and ran for 19 years. The original English translation of BOEING BOEING premiered in London in 1962 and made its Broadway debut in 1965. A film adaptation was released in 1968 starring Tony Curtis, Jerry Lewis and Thelma Ritter. A new English version of BOEING BOEING translated by Beverly Cross and Francis Evans premiered in London in 2007 and the Broadway production won the Tony Award for Best Revival of a Play in 2008.

South Milwaukee native, Michael Cotey returns to the director’s chair for Milwaukee Chamber Theatre’s BOEING BOEING after directing THINGS BEING WHAT THEY ARE in 2013.  The cast includes Brian J. Gill as swinging bachelor Bernard, Marcella Kearns as Berthe, Bernard’s housekeeper, and Ryan Schabach as Robert, Bernard’s old pal visiting from Wisconsin. The three stewardess “fiancées” will be played by Amber Smith, Samantha Sostarich and Anne Walaszek.

Playwright Marc Camoletti, was a Geneva-born French citizen who penned more than 40 plays, which have been translated into 18 languages and produced professionally in 55 countries. BOEING BOEING was his first international success and is one of the most-performed French plays in the world

The 2008 Broadway revival of BOEING BOEING starred two actors with Wisconsin connections, Bradley Whitford and Mark Rylance.  Madison-native Whitford played bachelor Bernard and is best known for numerous film and television appearances, most notably “The West Wing.”  British actor Mark Rylance spent part of his youth in Wisconsin and is a 1978 graduate of University School Milwaukee (where his father was an English teacher). Rylance won the 2008 Tony Award for Best Actor in a Play for the role of Robert, who is an old school chum from Wisconsin in the new translation. Rylance’s remarkable career includes serving as the artistic director of Shakespeare’s Globe Theatre and numerous stage, television and film roles, most recently as Thomas Cromwell in the BBC/PBS series “Wolf Hall.”

— VIP Opening Night Party: Celebrate the start of our 2015-2106 season with an opening night party filled with champagne, hors d’oeuvres and entertainment. Cost: $25 per person. Following the opening night performance on Friday, August 14 in the Skylight Bar & Bistro.

–Pre-performance ViewPoints: Join us for an insightful pre-show presentation by airline pilot

Wade Kearns entitled, “The Romance and Reality of the Air Crew World.” This free, pre-show presentation is on Wednesday, August 19 at 6:30 p.m. in the Skylight Bar & Bistro.

Marcella Kearns returns to MCT after performing in JEEVES IN BLOOM and MOONLIGHT AND MAGNOLIAS. Selected Midwest credits include productions with Renaissance Theaterworks, First Stage, Forward Theater Company, In Tandem Theatre, Milwaukee Shakespeare, and Milwaukee Repertory Theater; outside the region, she has worked with Chamber Repertory Theatre and Texas Repertory Theatre. She also serves as MCT’s Education & Literary Manager and as an adjunct theatre instructor at Carthage College and First Stage.

Ryan Schabach returns to Milwaukee Chamber Theatre after appearing in THINGS BEING WHAT THEY ARE.  In Wisconsin, he has performed with Next Act Theatre, In Tandem, Door Shakespeare, Third Avenue Playhouse, Forward Theater Company and Milwaukee Repertory Theater.  A graduate of UW-Madison, he spent three seasons with the Utah Shakespeare Festival and will enter his tenth season at Unity Theatre in Texas this fall.  He can also be seen giving tours at Lakefront Brewery.

Samantha Sostarich makes her MCT debut in BOEING BOEING. A graduate of UW-Madison, her recent performances include A MIDSUMMER NIGHT’S DREAM at Optimist Theatre, INTO THE WOODS at Skylight Music Theatre and FORTUNA THE TIMEBENDER VS. THE SCHOOL GIRLS OF DOOM at Milwaukee Opera Theatre. She has also performed with First Stage, In Tandem Theatre, Sunset Playhouse, Light Opera Works, Madison Repertory Theatre, The New Court Theatre and Kohls Wild Theatre.

Anne Walaszek returns to MCT after appearing as Cherie in BUS STOP. Currently a resident of Chicago, she was most recently seen as Imogen in CYMBELINE at Muse of Fire Theatre. Other roles include Don Quixote in DAWN, QUIXOTE at The Building Stage, Clarice in THE LIAR at Theatreworks, and Helena in ALL’S WELL THAT ENDS WELL at Great River Shakespeare Festival. She is also a playwright and her work has been produced at Three Brothers’ Theatre, the Chicago Fringe Festival and Duplicity Ensemble. She is a graduate of UW-Parkside.

Michael Cotey returns to MCT after directing THINGS BEING WHAT THEY ARE and for the Young Playwrights Festival. Directing credits include Illinois Shakespeare Festival, First Stage, UW-Milwaukee, Illinois Wesleyan University, Northwestern University and Youngblood Theatre. He was the Founding Artistic Director of Youngblood (2009-2013) where he directed CARTOON, SPIRITS TO ENFORCE, and THE FLU SEASON. As an actor, he has worked with the Utah and Illinois Shakespeare Festivals, Milwaukee Repertory Theater, First Stage, Next Act Theatre, In Tandem Theatre and Youngblood. He graduated from UW-Milwaukee with a BFA in theatre and is currently attending Northwestern University to earn his MFA in directing.