“Get Pissed Wisconsin,” a targeted advocacy campaign in Wisconsin to raise awareness about a proposal to require that FoodShare applicants be drug tested to receive benefits. 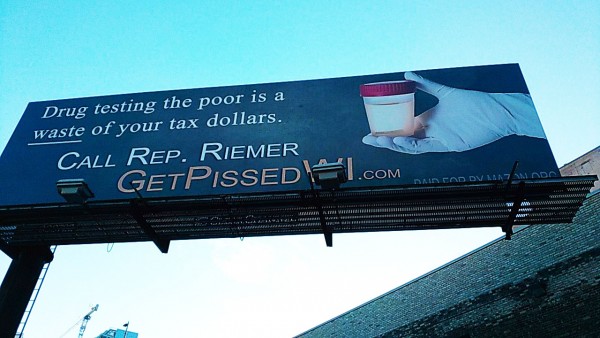 MAZON: A Jewish Response to Hunger (MAZON) has launched “Get Pissed Wisconsin,” a targeted advocacy campaign in Wisconsin to raise awareness about a proposal by Governor Scott Walker to require that FoodShare applicants be drug tested to receive benefits.

“MAZON is committed to ensuring that hungry Americans can access vital nutrition resources,” said Abby J. Leibman, President and CEO of MAZON. “Making certain that SNAP (the Supplemental Nutrition Assistance Program) is secure and not threatened by ill-conceived state barriers is essential to realizing that commitment. Governor Walker is trying to set a national precedent that will undermine this vital federal program and have a devastating impact on some of Wisconsin’s most vulnerable residents. We simply could not stand by and allow this highly partisan ideology to go unchallenged.”

The campaign is comprised of a series of digital and static billboards strategically placed in the hometowns of members of the Assembly Public Benefits Reform Committee, who will vote on the matter at a special session on Tuesday, January 30, 2018. The billboards draw attention to this action as a wasteful use of taxpayer money and encourage Wisconsinites in these communities to contact their Representatives to voice their opposition.

The campaign also includes a website GetPissedWI.com that provides comprehensive information on the issue, including background on the proposal and justification for why drug testing doesn’t work.

“We applaud our friends and partners at MAZON, a national anti-hunger leader in public policy and advocacy work, for this compelling, insightful campaign,” said Sherrie Tussler, executive director of Hunger Task Force in Milwaukee. “Wisconsin’s Governor has made a tragic leap in logic by assuming poor people are drug addicts. Anyone who cares about freedom and liberty should be deeply concerned that we are wasting tax dollars to negate people’s rights in order to shame the unemployed, based upon his assumptions.

“A special session of our legislature has been called by the Governor next week to pass even more punitive legislation than this. Taxpayers should be worried about deep and ill-advised investments of their hard-earned tax dollars in social program directives that only rob their neighbor of basic rights.”

As an expert in anti-hunger advocacy and policy, MAZON sees public education as a critical tool to influence public policy at the state and national level. In addition to the current “Get Pissed Wisconsin” campaign, in June 2017, MAZON brought its mobile educational exhibit, “This Is Hunger,” to Milwaukee as part of a 16-month national tour to raise awareness about the reality of who in America struggles with hunger and why.

“Wisconsin continues to set the standard for extreme legislation whose only purpose is to shred the social safety net,” said Leibman. “Wisconsinites need to know what their legislators are doing, and they need to hold those legislators accountable to do the right thing.”

About MAZON: A Jewish Response to Hunger

Inspired by Jewish values and ideals, MAZON is a national advocacy organization and working to end hunger among people of all faiths and backgrounds in the United States and Israel. MAZON’s Quick Reaction Fund supports time-sensitive actions for which a targeted and strategic action may yield a meaningful response. For more information, please visit mazon.org.