The center will be located near the southwest corner of W. Wells and N. 12th streets. 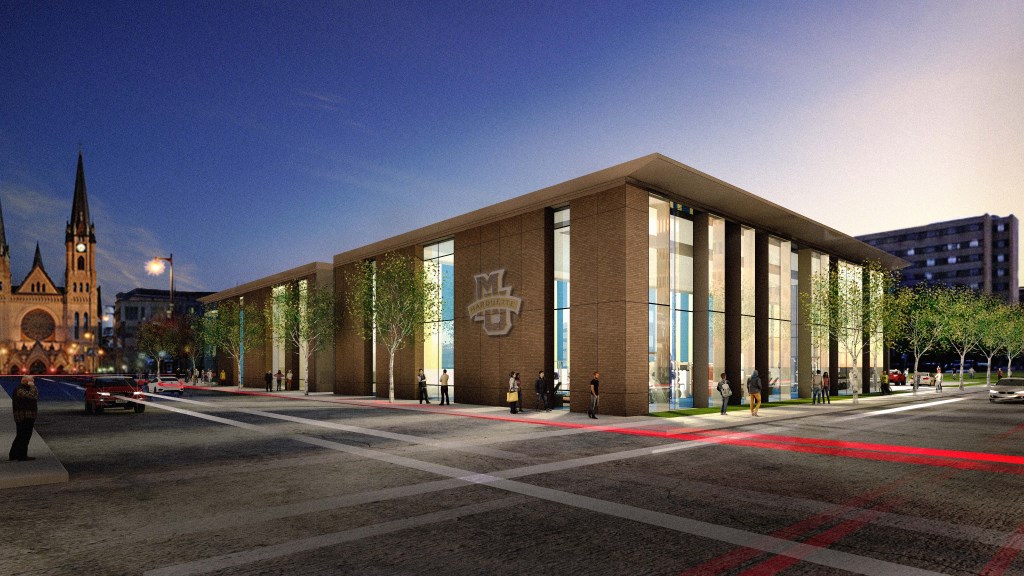 MILWAUKEE – On Friday, Marquette University’s Board of Trustees approved groundbreaking on the first phase of construction for the athletic performance research center (APRC). The approval came after Marquette University leaders presented design plans to the trustees, which included relocating the facility to the heart of campus. A formal groundbreaking ceremony is expected in the coming weeks.

The site will be strategically located near the southwest corner of West Wells Street and 12th Street, across from the Al McGuire Center and just north of Marquette’s Zilber Hall. During Marquette’s master planning process, the 12th and Wells location was identified as a high impact parcel for the campus. The university has already conducted preliminary environmental tests on the site.

“This new location is smarter and more convenient for our student-athletes, faculty and staff that will be housed in the APRC,” President Michael R. Lovell said. “While the location has changed, our vision to advance our mission through innovative sports and human performance research remains unchanged.”

The move comes after extensive analysis, which concluded that Marquette’s new seasonal dome fills the need for covered field space and is a more cost-efficient alternative to the large, permanent field house envisioned in the original APRC project.

Marquette and Aurora Health Care continue to be in discussions about concepts within the new facility, which will be located a block south of the Aurora Research Institute and Aurora Sinai Medical Center.

The APRC will be built in phases under a long-term master plan to develop the site. The first phase will include:

“I continue to be amazed by the generosity of our athletic donors,” said Bill Scholl, vice president and director of athletics. “I want to thank our benefactors who came forward to significantly bolster a few of our Big East programs on the rise – men’s and women’s lacrosse and men’s golf.”

Marquette constructed its seasonal dome in January 2017, which now serves thousands of students, including NCAA student-athletes, as well as club and intramural sports.

The new site is currently a parking lot, and those parking spaces will be replaced by a new lot on the northwest corner of 12th and West Wells Street.

The previous location for the APRC is a 10-acre site that is bordered by 6th Street, 10th Street, West Michigan Street and the Interchange. “We know that this is a highly visible and valuable location that further connects Marquette to downtown Milwaukee, and we will continue to evaluate the best use of the land,” said Lora Strigens, vice president for planning and strategy.