The university expects to have approximately 35 commissioned officers in place by the start of the 2015-16 academic year. 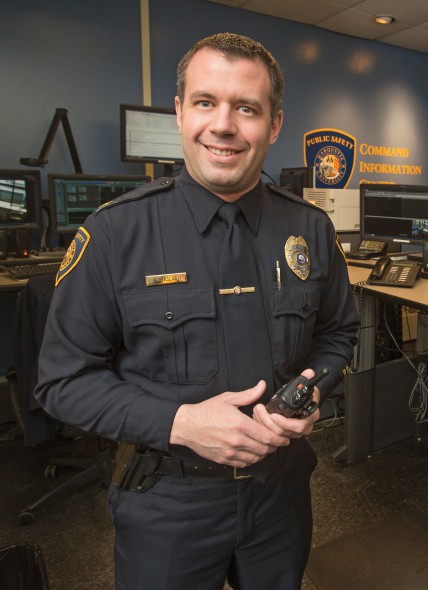 The transition will occur over the summer to accommodate the necessary officer training and certification requirements, according to Chief Paul Mascari.

The new Marquette University Police Department will take a phased training approach to convert the university’s public safety officers to fully commissioned police officers, Mascari said. Currently, DPS has 90 members, 51 of whom are qualified to be armed. A university police officer must meet additional training and certification standards provided by the state’s Law Enforcement Standards Board.

The university expects to have approximately 35 commissioned officers in place by the start of the 2015-16 academic year. Mascari, who will be sworn in the morning of May 1, will swear in 19 current DPS officers later that day.

“Our mission and focus is to serve our campus community in ways that are consistent with Marquette’s mission, values and principles and this will continue to be our everyday emphasis,” Mascari said.

“Our university thoroughly educates students and strongly supports the continuing education of faculty and staff, so we are taking very seriously our responsibility to provide the same comprehensive approach to further educate and prepare our officers for service to our community,” said President Michael R. Lovell, who in January shared his decision to make the move to a fully commissioned police department in his Presidential Address to campus.

To be police officers, current DPS officers must complete the state-mandated 520 hours of training, as well as a psychological review, medical evaluation and drug test.

Additionally, consistent with Marquette’s mission, all sworn MUPD officers will have undergone intensive training sessions in the areas of homeless outreach, crisis intervention and fair and impartial police training. Homeless outreach training teaches officers alternatives to taking “enforcement action” as it relates to the homeless, while identifying how to help them from a range of community based resources.

Crisis intervention training is specialized training for how to work with the mentally ill. It includes training on all facets of brain disease including depression, bipolar disorder, schizophrenia and anxiety disorders, as well as medications, developmental disabilities, post-traumatic stress and cultural issues. The fair and impartial policing training program applies the modern science of bias to policing. It trains officers on the effect of implicit bias and gives them the skills they need to reduce and manage their biases.

Over the past 15 years while working under its current classification as a “private detective agency,” Marquette’s Department of Public Safety has built an extensive safety infrastructure throughout campus and in the near off-campus neighborhood, which includes more than 700 cameras, over 450 blue light phones, a state-of-the-art command information center and a nationally recognized student safety program.

Earlier this year, the university partnered with BlueLight, a campus safety app that directly connects users to DPS and allows an individual to share his or her location with a close contact.

In another effort to help reduce crime, Marquette and its partners in Near West Side Partners Inc. recently announced a major initiative to tackle issues of crime and safety in the near west side neighborhood, which includes areas outside of the Marquette University Police Department patrol zone.