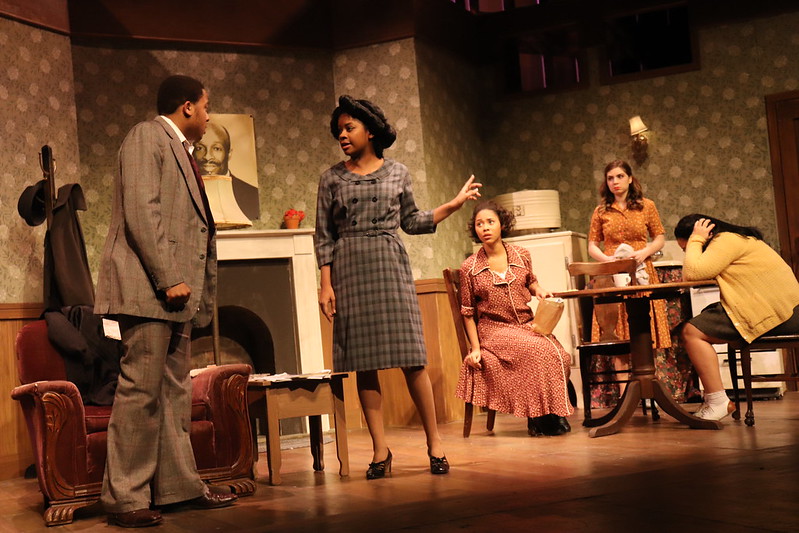 2019-20 Crumbs from the Table of Joy. Photo courtesy of Marquette University.

MILWAUKEE — Marquette Theatre has announced the schedule for its 46th annual season, “She Persisted.” Performances will be staged in a combination of in-person and virtual shows in accordance with university health and safety regulations.

The first two performances of the season — “Songs of Note” and “Dead Man’s Cell Phone” — are scheduled to happen virtually. Live performances will be recorded and streamed at the scheduled showtimes.

“The theme for the 2020-2021 for Marquette Theatre is ‘She Persisted,’ and each of this season’s offerings features a leading female character who refuses to give in and learns to stand tall,” said Jamie Cheatham, assistant professor and head of acting, digital media and performing arts. “These leads persist against the obstacles that surround them, the uncertainty that faces them, and the moral dilemmas that envelope them. As you follow our heroines on their journey of persistence, we hope that you discover something about yourself too.

“I believe this theme is particularly relevant now. Our season focuses on the struggles and strength of our female protagonists, but everyone, regardless of gender identity, should relate to the additional need to persevere in these challenging times and hopefully take inspiration from these strong heroines.”

Though separated by social distancing, our students hope to reach viewers with this original, streamed, musical revue. While today’s challenges feel particularly unique, feelings of separation and the need to connect have been explored for ages theatrically through the unique form of spoken and sung letters. “Songs of Note” hopes to connect with the audience through some of musical theatre’s greatest hits, old and new.

A cell phone rings and rings. When the man at the next table doesn’t respond, a frustrated woman sitting nearby picks up his call. A spur-of-the-moment lie leads her down a rabbit hole where suddenly she becomes involved in his surreal and dangerous world. In this comedic comment on modern technology, Pulitzer Prize-nominated playwright Sarah Ruhl examines how the cell phone is supposed to keep us connected but may be the thing that isolates us the most.

Based on the true story of Henrietta Leavitt, a brilliant astronomer in the height of the suffragette movement, “Silent Sky” illuminates a woman’s struggle to succeed in the male-dominated world of science. As women are pushing for social progress, Henrietta pushes for scientific progress and the recognition that should come with her discoveries. Progress is not without personal cost, but she finds it worth the sacrifice to be part of unlocking the secrets of the universe.

When faced with the moral dilemma to choose between her family’s honor and her own life, a young woman forces us to consider whether we could summon her courage to do the right thing. Our modern retelling of this classic Greek tale from Sophocles was reimagined by Jean Anouilh to be performed in Nazi-occupied Paris, provoking fierce controversy with its stance of the individual defying the state.

A bubbly young girl’s obsession with the color pink goes too far when she indulges in too many pink foods, including her beloved cupcakes. When her “dream come true” turns troublesome, her little brother Peter comes to the rescue. In this fun musical, based on the best-selling children’s book, Pinkalicious and her family learn that colors shouldn’t come with categories and that there can be too much of a good thing.