In early-seventeenth century France, composers began to experiment with a new, expressive language of musical gestures designed to elicit intense emotional responses in the hearts of listeners. They also distilled their music to the barest essentials – a voice with spare accompaniment – in order to achieve the most direct effect: to make hearts melt with tenderness, ache with longing, weep in despair, or burn with passion. The resulting air de cour was a miniature masterpiece that could alternately express tender sentiments, gut-wrenching sorrow, utter desperation, languorous swoons, and intense ardor.

Founded in Cleveland in 2006, Les Délices brings together artists with national reputations who share a passion for this exquisite yet seldom heard repertoire. Les Délices presents premiere performances of important works and adapts neglected masterpieces to their own performing forces: research, improvisation, and composition in historical styles are touchstones of the group’s approach.

Born in London, England, Nigel North was initially inspired at the age of seven by the early 1960s instrumental pop group The Shadows, and went on to study classical violin and guitar, discovering the lute when he was 15. Basically self-taught on the lute, he has specialized on lutes and early guitars since 1976, developing a unique musical life which embraces activities as a teacher, accompanist, soloist, director, and writer. Since 1999 he has been Professor of Lute in the “Early Music Institute” at Indiana University, Bloomington.

This concert is sponsored by Ralph Bielenberg, with residency support from the Arts Midwest Touring Fund, a program of Arts Midwest, which is generously supported by the National Endowment for the Arts  with additional contributions from the Wisconsin Arts Board.

Early Music Now is an Affiliate Member of the United Performing Arts Fund. 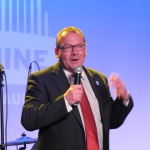