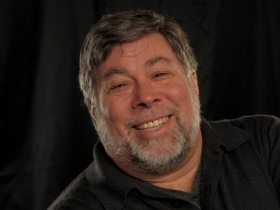 Flying Car 2014 features presentations from leaders who are shaping the future and hands-on labs where guests dig into new fields. The event’s keynote, sponsored by WHEDA, will be Steve Wozniak, a Silicon Valley icon and philanthropist for more than 30 years. Wozniak helped shape the computing industry, co-founding Apple Computer Inc. with Steve Jobs in 1976 with his Apple I personal computer. Wozniak has received many awards and honors, including the National Medal of Technology and induction into the Inventors Hall of Fame. Wozniak has been involved in various business and philanthropic ventures through the years, and currently serves as Chief Scientist for Fusion-io. In 2014, he was awarded the Hoover Medal, a prestigious honor given for “outstanding extra-career services by engineers to humanity.”

Flying Car 2014 has adopted the theme “People-Powered Innovation” – because it all starts with people. New ideas don’t start with technology and money. They start with the imagination and determination of people.

“When we rebranded Innovation Week as ‘Flying Car’ in 2013, the event truly started to take off,” said Briggs & Stratton chairman, president and CEO and MiKE Council Co-Chair Todd Teske. “At Flying Car 2014, speakers and labs will teach guests that anyone, no matter their title, can infuse innovation into their everyday work and lives.”

Guests will also participate in hands-on labs led by locally- and nationally-renowned innovators and companies, and will have opportunities to network and reconnect with each other and speakers.