DNR to Review Proposed Updates to Lead and Copper Rule

MADISON, Wis. – The U.S. Environmental Protection Agency (EPA) this week announced a proposal to address how communities across the country can reduce lead in public drinking water. EPA Administrator Andrew Wheeler revealed the proposal at events in Green Bay on Thursday and Milwaukee on Friday.

Enacted in 1991, the federal Lead and Copper Rule (LCR) is designed to protect public health by using corrosion control to limit the amount of lead and copper allowed in public drinking water. The Lead and Copper Rule, created under the federal Safe Drinking Water Act (SDWA), regulates both lead and copper in public water systems nationwide. Although the EPA has set a maximum contaminant level goal for lead of zero, unfortunately, the proposed rule revision did not call for mandatory replacement of lead service lines.

In his remarks, Wheeler highlighted three areas of the revisions, including those that require more water systems to act sooner to reduce lead levels and protect public health, improve transparency and communication, and better protect children and the most at-risk communities.

While staff at the Department of Natural Resources review the 347-page proposed rule, the DNR initially concludes that the draft rule revisions do not adequately address full lead service line replacement, which the department recommends as the best way to reduce exposure to lead from drinking water.

“There are hundreds of thousands of lead lines that need to be replaced in more than 130 cities, towns and villages across Wisconsin. We have to get the lead service lines out of the ground if we are going to ensure drinking water is safely provided to all,” said DNR Secretary-designee Preston D. Cole. “In order to remove lead service lines quickly from our communities, we will need more funding. There is no safe level of lead.”

To help expedite lead service line replacement, Governor Evers proposed $40 million in bonding for the budget that would provide critical state cost-sharing to local water utilities that do not have the resources to replace the lines on their own. The state legislature removed the $40 million from the budget. In addition, the DNR also supports the numerous agencies and organizations across the country, calling for significant increases in funding for the Clean Water and Safe Drinking Water State Revolving Loan Funds. These funds are the primary source of federal dollars for water infrastructure improvements like lead service line replacement.

Exposure to lead from aging water pipes is a growing public health concern. In homes with lead pipes that connect the home to the water main – also known as lead services lines – these pipes are typically the most significant source of lead in the water. Such pipes can leach lead into drinking water, causing serious health problems. According to EPA and the Centers for Disease Control and Prevention, there is no known safe level of lead in a child’s blood. Lead poisoning can slow brain development in children and leads to lifelong health effects.

“Under the current rule, the Wisconsin Department of Natural Resources is doing its best to reduce lead levels in Wisconsin, but we can do better,” said Steve Elmore, DNR Drinking Water and Groundwater Program Director. “We had hoped the EPA would have set clear timelines for lead service line replacement. Instead, we will use the Lead and Copper Rule revisions to fill in some gaps, notify the public and continue our work with communities to decrease lead levels in drinking water.”

Wisconsin’s public water systems are regulated under the Safe Drinking Water Act (SDWA). The SDWA establishes and enforces standards that public water systems are required to follow. In Wisconsin, EPA has delegated the SDWA enforcement responsibility to the DNR. In this role, the DNR oversees corrosion control treatment and follows up on lead action level exceedances as part of the state’s drinking water program. Wisconsin is committed to minimizing exposure to lead levels in drinking water, and the DNR intends to formally comment on the EPA rule revisions.

May 23rd, 2022 by Wisconsin Department of Natural Resources

May 20th, 2022 by Wisconsin Department of Natural Resources 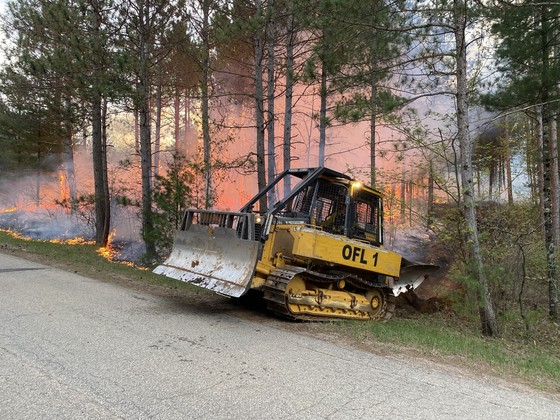 Very High Fire Danger Across Most Of Wisconsin

May 16th, 2022 by Wisconsin Department of Natural Resources