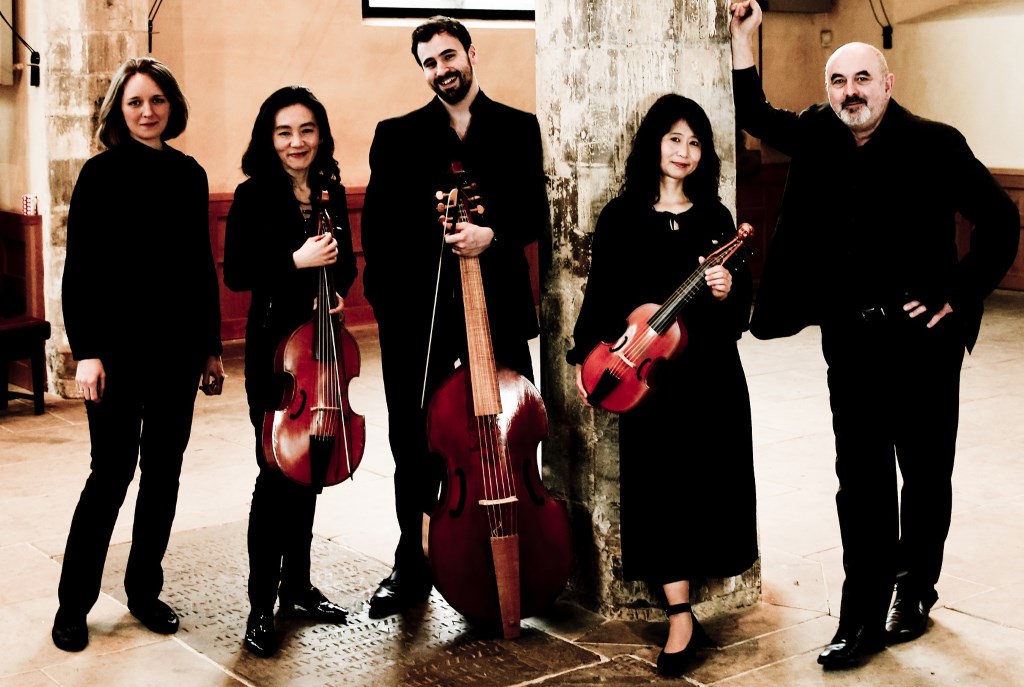 With its accustomed mix of well-established audience favorites and artists new to Milwaukee, EMN aims to create lively connections with the past through historically informed performances of music composed before 1800. As in recent seasons, artists and programs will also reach Across Borders – Across Time. Each half of the six-concert series provides a different perspective on the scope of early music, offering new sounds and fresh perspectives on our diverse cultural heritage.

The first half of the season presents three world-class ensembles that are already familiar to Milwaukee audiences: from England, France, and the United States. Each represents a different period and genre: 9th century Medieval vocal music, Elizabethan viol consort music (and the North American premiere of a new work for viols), and two performances of Christmas choral music of the Renaissance.

The second half presents outstanding ensembles new to Milwaukee – in fact, one will be making its North American debut! With artists from Cuba, Canada, and the United States, the historic progression continues with colonial music from the Hispanic Americas, Appalachian music with its roots in the British Isles, and a French Baroque musical murder mystery!

Between the two halves of the series, an extra concert will be inserted celebrating music for clarinet and period string quartet, by Mozart, Weber, and Beethoven.

Tickets to this extraordinary bounty of world-class early music are available as individual concerts or in full or partial season packages in three seating sections, with discounts for 4- 5- or 6-concert packages.  Each full 6-concert subscription comes with a voucher for one free guest ticket. All three tiers feature general seating. Note that Tier 1 seating closes on September 30. The extra clarinet concert is available as a separate single ticket.

All orders will be delivered via email as “print-at-home” tickets, beginning May 3rd, with the option of choosing email or mail receipts to be redeemed at Will Call.

Online ticket sales begin May 3rd at EarlyMusicNow.org. Tickets may also be ordered by phone at 414.225.3113, or by mail at Early Music Now, 759 North Milwaukee Street #420, Milwaukee 53202. A printable order form is available on the website.

“In Nomine”  | Celebrating their own 30th anniversary with a program centered on 16th century English works for viol consort  by Byrd, Gibbons, Lawes, Purcell, Taverner, and Tye, along with a 1995 work of Gavin Bryars and the North American premiere of a composition by Nico Muhly. fretwork.co/uk

“Fretwork is the finest viol consort on the planet.” – Stephen Petit, The London Evening Standard

“Monks Singing Pagans” | Led by Benjamin Bagby and dedicated to the performance of music from before 1300, this innovative ensemble explores monastic manuscripts from the 9th to 12th centuries, revealing that many monks were singing (not just Gregorian chant, but also) songs that were sometimes anything but Christian! sequentia.org

“Sequentia ranks among the noblest and most active of the very-early-music performing groups.” – LA Weekly

“A Rose in Winter” | This Milwaukee favorite ensemble brings us “A Garden of Medieval and Renaissance Music for the Nativity” – honoring the ancient Christmas legend that describes a midnight blooming of all manner of plants, trees, and flowers, in honor of the Madonna and Child. Music of Byrd, Mouton, English ballads, Spanish cantigas, German carols.  roseensemble.org

“. . . they sing and play with a lusty ease that blows the dust off old music.” – Milwaukee Journal Sentinel

“Sugarloaf Mountain” | Eight musicians from this award-winning ensemble’s collection of creative artists bring voices, hammered dulcimer, harpsichord, fiddle, wooden flutes, lute, guitar, banjo, and cello to recreate “An Appalachian Gathering” – music with roots in the British Isles that long ago mingled with Southern hymns and African spirituals in the hills of Virginia.   apollosfire.org

“The audience . . . enjoyed a taste of the good times that our mountain forebears must have had. . . . an absolutely joyous achievement” – ClevelandClassical.com

“Who Killed Leclair?” | Grand Prize winners in the 2014 Early Music America Baroque Performance Competition, this young ensemble of Baroque flute, violin, cello, and harpsichord weaves a lively investigation of the murder of Jean-Marie Leclair (1697-1764) into stellar performances of several of his trio sonatas and a work by his talented rival, Jean-Pierre Guignon.  infusionbaroque.com

“Infusion Baroque shaped the music from the very first note.  They were dynamic and alive. They had no fear.” – Early Music America Magazine

“Music for Clarinet and String Quartet” | In two prior seasons we have celebrated an instrument not usually associated with early music, but which has historical roots in the chalumeau and the basset horn. Prior programs showcased those earlier instruments with soprano, harpsichord, cello, and fortepiano. Eric Hoeprich, who specializes in performing on historical clarinet, returns for this third installment, this time with The London Haydn Quartet, one of the world’s leading period instrument string ensembles. The program will include W.A. Mozart’s “Clarinet Quintet” K581, Beethoven’s “String Quartet” Opus 18, No. 3, and the Weber “Clarinet Quintet” Opus 34.    londonhaydnquartet.co.uk and glossamusic.com/glossa/artist.aspx?id=30

The State of Politics: Political Storm Brewing Over Redistricting by Steven Walters

Op Ed: City Can Do More to Plant Trees by Robert Monnat