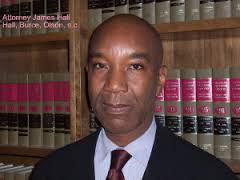 “A quiet advocate, James has shown tenacity and a dogged commitment to justice for the benefit of our entire community,” said Brian Schupper, chair of the award committee and Friebert’s son-in-law. “He has been a leader for good, demonstrating courage and compassion throughout his career.”

Hall will receive the award at the JCRC’s Annual Meeting on Thursday, June 18. Click here for more information and to register for the event.

Robert H. Friebert (1938-2013) dedicated himself to the pursuit of social justice and the Jewish value of tikkun olam (repairing the world). A graduate of the University of Wisconsin Law School, Friebert was a founding partner of the law firm Friebert, Finerty and St. John S.C.

He argued four cases in the United States Supreme Court and served as the first public defender for the State of Wisconsin from 1966-1968. Friebert was also extremely active in local, state and national Democratic politics in his pursuit of social justice. In addition to his legal and political work, Friebert held significant leadership roles in numerous organizations, boards and commissions. For more on Friebert and the award, click here.

About the Jewish Community Relations Council
Founded in 1938, the Jewish Community Relations Council, a program of the Milwaukee Jewish Federation, advocates for the rights and values of Jews individually and collectively, here and abroad. The Council implements a coordinated program of education, action, and advocacy for the Jewish community. For more than 100 years, the Milwaukee Jewish Federation has been dedicated to building a strong Jewish community. We distributed $20 million last year to Jewish and non-Jewish organizations locally and around the world, and manage philanthropy through our $150 million Jewish Community Foundation.

Transportation: Milwaukee Wants Your Input on Future of Dockless Scooters by Jeramey Jannene