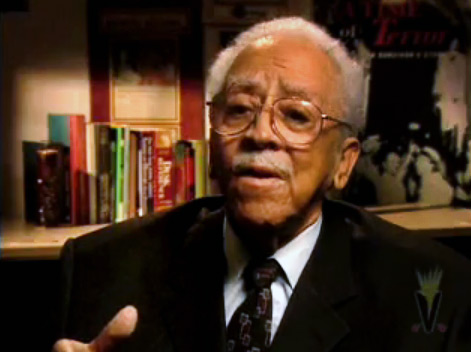 MILWAUKEE – A celebration of the life of James Cameron, founder of America’s Black Holocaust Museum and the only known survivor of a lynching, will be held on Thursday, April 12, at Marquette University’s Haggerty Museum of Art, 1234 W. Tory Hill St.

The event, “Connecting Arts and Community Voices in Celebration of Dr. James Cameron,” will include networking from 5 p.m. to 6 p.m., a program at 6 p.m. and a closing at 7:45 p.m.

“History and leadership are inextricably intertwined,” said Christine Hill, executive director of Future Milwaukee, one of the sponsors of the event. “Future Milwaukee is honored to support a forum to honor Dr. Cameron’s leadership and the history he lived.”

In his book, A Time of Terror: A Survivor’s Story, Cameron recounted when he and two other black teenagers were lynched in 1930. Despite having the rope around his neck, an individual in the crowd came to his defense and Cameron was saved, but was tried and convicted as an accessory to the murder that incited the lynching. He spent five years writing his book while in prison, and was pardoned more than 60 years later in 1993 by Indiana Gov. Evan Bayh and the Indiana Parole Board.

Cameron’s lifework focused on raising Americans’ consciousness and conscience about lynching, retelling his story many times, including on “Larry King Live,” “The Oprah Winfrey Show” and “The 700 Club.”

In 1999, Cameron received an honorary doctoral degree from the University of Wisconsin-Milwaukee.

As an adult, Cameron became a devout Catholic. He died at the age of 92 in 2006. Hundreds of people packed Milwaukee’s Cathedral of St. John to pay tribute to him, with U.S. Rep. Gwendolyn Moore (D-Wis.) giving one of the eulogies.

The museum’s exhibits are online at abhmuseum.org.

The event is sponsored by the Haggerty Museum of Art, Future Milwaukee and Marquette University’s Center for Urban Research, Teaching and Outreach. It will include performances by artists from Stillwaters Collective.