Carolers Deliver Stockings of Coal to We Energies 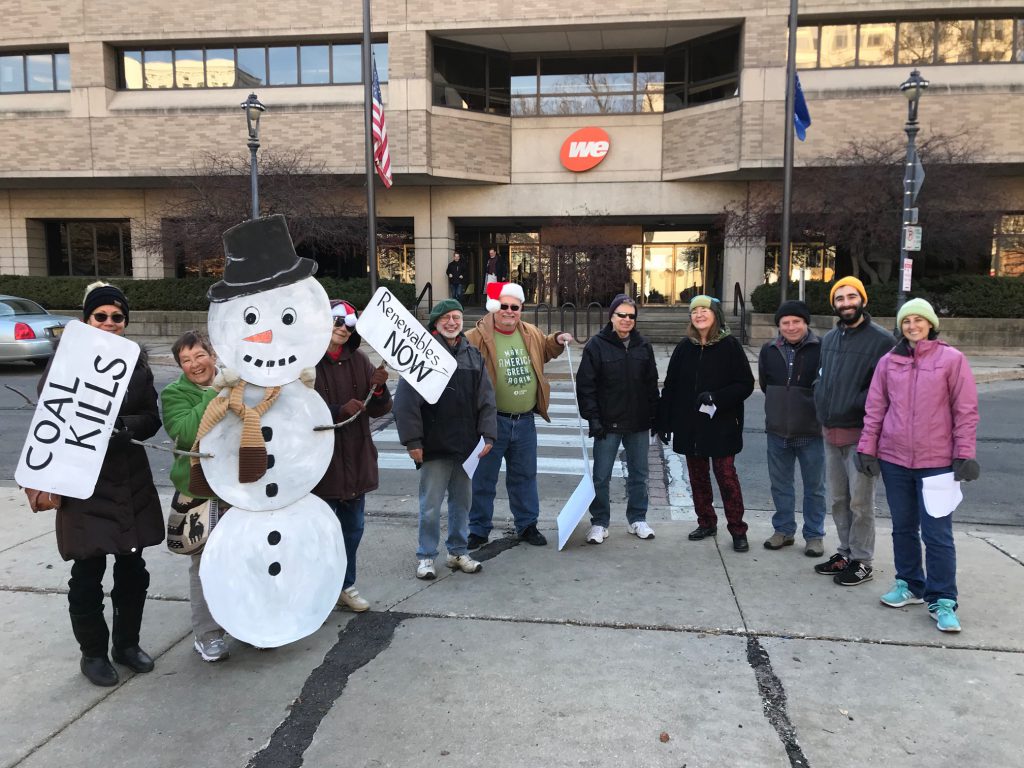 Carolers Deliver Stockings of Coal to We Energies. Photo courtesy of the Clean Power Coalition-Southeast Wisconsin.

Milwaukee, WI – On Tuesday, coal plant neighbors and other members of the Clean Power Coalition of Southeast Wisconsin delivered stockings full of coal to We Energies’ headquarters in Milwaukee to demonstrate their concerns with the company’s continued reliance on coal energy. They also delivered 1,700+ petition signatures in favor of replacing the coal plants in Oak Creek with clean, renewable energy.

“With these petitions, We Energies’ customers have spoken resoundingly in favor of replacing the coal plants in Oak Creek with clean energy sources like solar and wind. Clean energy is coming to town. The only question is, how long will We Energies choose to stay on the naughty list by burning coal?” asked Dana LaFontsee, a representative of the coalition.

As they approached We Energies, the group sang its versions of classic holiday carols including “Coal Dust Kills” sung to the tune of “Jingle Bells” and “Dusty the Coal Man” sung to the tune of “Frosty the Snowman.” The carolers then gathered in nearby Zeidler Union Square to sing a second round of songs and speak about their concerns with We Energies’ coal burning.

“Like everyone who lives in southeastern Wisconsin, I continue to be exposed to the toxic effects of We Energies’ coal plants in Oak Creek,” commented Carl Lindner, a resident of Caledonia. “Coal energy increases our chances of contracting asthma, bronchitis, emphysema, COPD and cancer. We Energies knows this, but they still haven’t transitioned to renewable energy. When will they stop putting short-term profits ahead of our health?”

Sister Janet Weyker, who lives just south of the coal plants, agreed. “This holiday season would be much merrier if we got news from We Energies that they are making serious plans to implement 100% clean energy in this New Year!” she exclaimed.

The first section of the lyrics to “Dusty the Coal Man” read:

Full lyrics can be found here.

Background: Families who live near We Energies’ coal-fired Oak Creek power plants have been expressing concerns to the company for years about negative health effects they are suffering as a result of exposure to coal dust and coal ash emitted from the plants and the trains that deliver the coal. On March 5, winds blew dust from a coal storage pile at the Oak Creek plants into neighborhoods north of the plants. Test results confirmed the black dust found covering homes, cars, and yards in several Oak Creek neighborhoods was coal dust. Residents reported additional dustings throughout the spring and early summer even after We Energies claimed to have taken additional steps to contain the dust. In the past several years, similar incidents have occurred in other neighborhoods, especially to the south of the plant. Coal contains toxic metals including lead, mercury, and arsenic. The health effects of inhalable particulate matter such as coal dust include aggravation of asthma, respiratory symptoms, an increase in hospital emissions, and increased mortality from cardiovascular and respiratory diseases and lung cancer.

The Clean Power Coalition-Southeast Wisconsin will educate the public about the dangers of burning coal on the health of those who live and work in the vicinity of We Energies’ South Oak Creek and Elm Road Power Plants. How we choose to generate electricity has consequences that reach far beyond the return on shareholder investment, affecting everything from public health to a stable climate. When air, water, and soil are polluted, health and life are put at risk. The Clean Power Coalition will promote public debate about the appropriate source of energy for Southeastern Wisconsin. At the same time, the coalition urges We Energies to: 1.) immediately contain the coal dust and other health hazards emanating from the Oak Creek plants, 2.) phase out its use of coal, and 3.) promote rather than obstruct the adoption of renewable energy throughout its service territory.

Covid-19 Has Further Exposed Renewable Energy as a Health, Economic, and Moral Imperative

January 23 Event is Free and Open to the Public.

January 23 Event is Free and Open to the Public