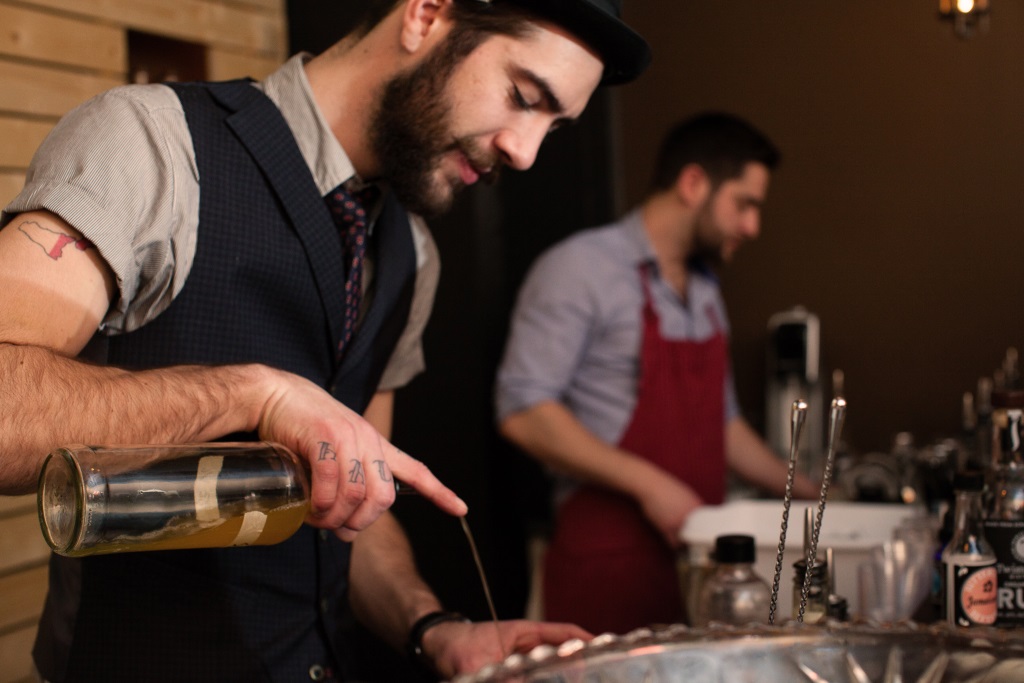 Dock18 Cocktail Lab will be located inside the Twisted Path Distillery on the first floor of the warehouse at 2018 S 1st Street, and will be a partnership between Bittercube and Twisted Path owner, Brian Sammons.

“We work with distilleries both large and small all across the country,” states Bittercube co-owner Ira Koplowitz. “When we moved facilities from Madison to the Lincoln Warehouse in Milwaukee, we were pleasantly surprised to find out Twisted Path Distillery was in the warehouse too. We have collaborated at trade shows and cocktail classes, so this was a natural progression,” adds Koplowitz.

Dock18 Cocktail Lab will offer cocktails featuring Twisted Path and Bittercube products as well as house made syrups and liqueurs. Both companies are hard at work finalizing the initial menu which can be viewed here: bit.ly/Dock18. Prices range $7 – $9 for cocktails.

The plan is for the cocktail menu to change weekly, showcasing a wide variety of experimental techniques and flavor profiles. Cocktail classes for the budding home cocktail enthusiast will also be a staple at Dock18, and taught by Bittercube staff.

A public grand opening celebration is scheduled on January 2, 2016 from 5:00 PM – midnight. The evening will feature guest DJs Chris Rosneau (Volcano Choir, Collections of Colonies of Bees) Jon Mueller (Volcano Choir, Rhythmplex) and musician Hal Rammel. Bittercube co-founder, Nick Kosevich will make the journey from Minneapolis and plans to be in attendance that evening. Guests are encouraged to RSVP using this link – Dock18MKEgrandopening.eventbrite.com.

“We’re excited to start making drinks come true at the Lincoln Warehouse and to be experimenting and tinkering along the way,” says Koplowitz. “Both companies do things from scratch and love experimentation, so this should be a great collaboration,” says Sammons.

Beginning January 7th, Dock18 will be open Thursdays and Fridays 5pm to Midnight, Saturdays 1pm to Midnight, and Sundays 1pm to 5pm. Tours will also be available by appointment during regular hours of operation.

About Twisted Path Distillery: founded by distiller Brian Sammons in the Bay View neighborhood of Milwaukee in December 2014. Twisted Path is a small (one-man) distillery making certified organic spirits entirely from scratch. In building the distillery and developing spirits, he evaluated every step with one goal in mind: make it taste great. This means never compromising quality for efficiency. He starts with premium organic ingredients, and in small, careful, slow batches, makes spirits that showcase the quality of those ingredients.

About Bittercube: Bittercube was founded by Nicholas Kosevich and Ira Koplowitz in 2009. After successful stints at Town Talk Diner (Nick) in Minneapolis and The Violet Hour (Ira) in Chicago, they began developing, formulating, and tweaking the lineup that is now the six varieties of Bittercube Bitters. The first larger batches began maceration in July of 2010, and since then the business has grown to distributed in more than 25 states around the country. Beyond bitters, Bittercube consults with a number of restaurants and bars, creating unique cocktail programs throughout the country. Bittercube has a team of dedicated cocktail craftsmen and lend its spirited prowess to trade shows, cocktail classes, events, weddings and cocktail dinners. Bittercube has been featured in Martha Stewart’s Everyday Food, Playboy, Imbibe Magazine, Timeout, Chicago Tribune, New York Times, Bloomberg BusinessWeek, GO – AirTran Inflight Magazine, Milwaukee Journal-Sentinel, NPR, and Daily Candy, among other publications.