“An Evening with Groucho” Begins March 24 at Milwaukee Rep

Groucho Marx comes alive for a hilarious night of theater! 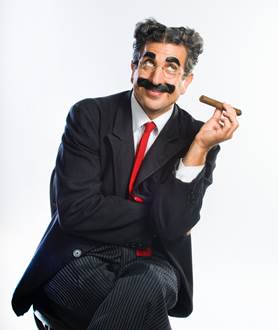 March 1, 2017  [Milwaukee] – Milwaukee Repertory Theater is delighted to make Milwaukee laugh with the global hit An Evening with Groucho starring Frank Ferrante this March 24- May 28 in the Stackner Cabaret.

Deemed the “greatest living interpreter of Groucho Marx’s material” by The New York Times, Frank Ferrante brings his acclaimed production as seen on PBS and in New York to Milwaukee. This fast paced 90 minutes of hilarity that is perfect for the whole family features the best Groucho one-liners and songs including “Hooray For Captain Spalding,” and “Lydia, the Tattooed Lady.” Accompanied by his onstage pianist, Ferrante portrays the young Groucho of stage and film and reacquaints us with the likes of brothers Harpo, Chico, Zeppo and Gummo, Charlie Chaplin, W.C. Fields, Marx foil, Margaret Dumont and MGM’s Louis B. Mayer.   Called “nothing short of masterful” by the Chicago Tribune, come prepared to be entertained by the true master of comedy.

An Evening with Groucho begins performances March 24 and runs through May 28, 2017 in the Stackner Cabaret.   Opening night is set for Sunday, March 26.  Tickets can be purchased online at www.MilwaukeeRep.com, by phone at 414-224-9490 or in person at the Ticket Office (108 E. Wells Street).  An Evening with Groucho is sponsored by David and Camille Kundert.  The Rep is sponsored in part by The United Performing Arts Fund.

Frank Ferrante is an actor, director and producer described by The New York Times as “the greatest living interpreter of Groucho Marx’s material.” Animal Crackers and A Night at the Opera co-author Morrie Ryskind called him “the only actor aside from Groucho who delivered my lines as they were intended.” Discovered by Groucho’s son Arthur when Frank was a drama student at the University of Southern California, Frank originated the off-Broadway title role in Groucho: A Life in Revue (written by Arthur) portraying the comedian from age 15 to 85. For this role, Frank earned New York’s Theatre World Award and an Outer Critics Circle nomination. He reprised the role in London’s West End and was nominated for the Laurence Olivier Award for ‘Comedy Performance of the Year.’ Frank played the Groucho role in the off-Broadway revival of The Cocoanuts and has played Captain Spalding in several productions of Animal Crackers winning a Connecticut Critics Circle Award for his portrayal at Goodspeed Opera House and a Helen Hayes nomination in Washington D.C. at Arena Stage. In Boston, he played the Huntington Theatre in the record-breaking run of Animal Crackers that landed Frank on the cover of American Theatre magazine. Frank has now performed the Groucho role over 2500 times in more than 400 cities. His other regional roles include Max Prince in Neil Simon’s Laughter on the 23rd Floor at Philadelphia’s Walnut Street Theatre (which Frank also directed); George S. Kaufman in By George (a one-man play written by Frank); Oscar in The Odd Couple and leads in The Sunshine Boys, Lady in the Dark and Anything Goes. Frank directed “M*A*S*H” star Jamie Farr in the Kaufman & Hart comedy George Washington Slept Here and revivals of Simon’s Brighton Beach Memoirs, Biloxi Blues, Broadway Bound and Lost in Yonkers. In 1995, he directed and developed the world premiere of the Pulitzer finalist Old Wicked Songs. In 2001, Frank directed, produced and starred in the national PBS television program “Groucho: A Life in Revue.” Frank has played over 1200 performances as the comic Latin lover ‘Caesar’ in the cirque show Teatro ZinZanni in Seattle and San Francisco and in Palazzo in Amsterdam. Recently, Frank toured An Evening With Groucho for four weeks in Australia. On television, Frank played a speaking mime on Rob Corddry’s Emmy Award-winning comedy “Childrens Hospital” and can be heard on the animated series “Garfield” as the voice of Lyman, Odie’s first owner. He became a question on the classic TV program “Jeopardy.” “He took his portrayal of Groucho Marx to New York in 1986.” The answer: “Who is Frank Ferrante?”

An Evening with Groucho

Written and Performed by Frank Ferrante

Audio-Described Performance: Sunday, April 2, 7:00pm – the show will be described for patrons who are blind or have low vision. 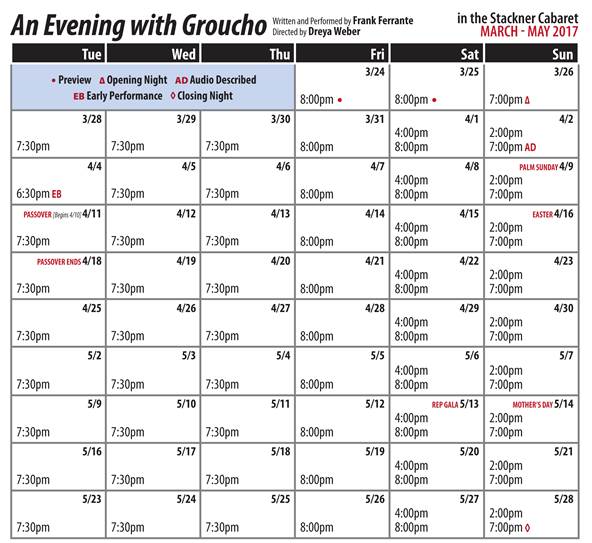 Milwaukee Rep is a nationally-recognized company that presents compelling dramas, powerful classics, award-winning contemporary works and full-scale musicals housed in its three unique performance venues – the Quadracci Powerhouse, Stiemke Studio and Stackner Cabaret. The Rep also produces an annual production of A Christmas Carol, which featured a World Premiere of a new adaptation in 2016, at the historic Pabst Theater.  Under the leadership of Artistic Director Mark Clements and Managing Director Chad Bauman, Milwaukee Repertory Theater ignites positive change in the cultural, social, and economic vitality of its community by creating world-class theater experiences that entertain, provoke, and inspire meaningful dialogue among an audience representative of Milwaukee’s rich diversity.