Components include a Presenting Sponsorship of Summerfest, Construction of a new 23,000-seat Amphitheater, new North Gate and Plaza and Community Programming and Outreach 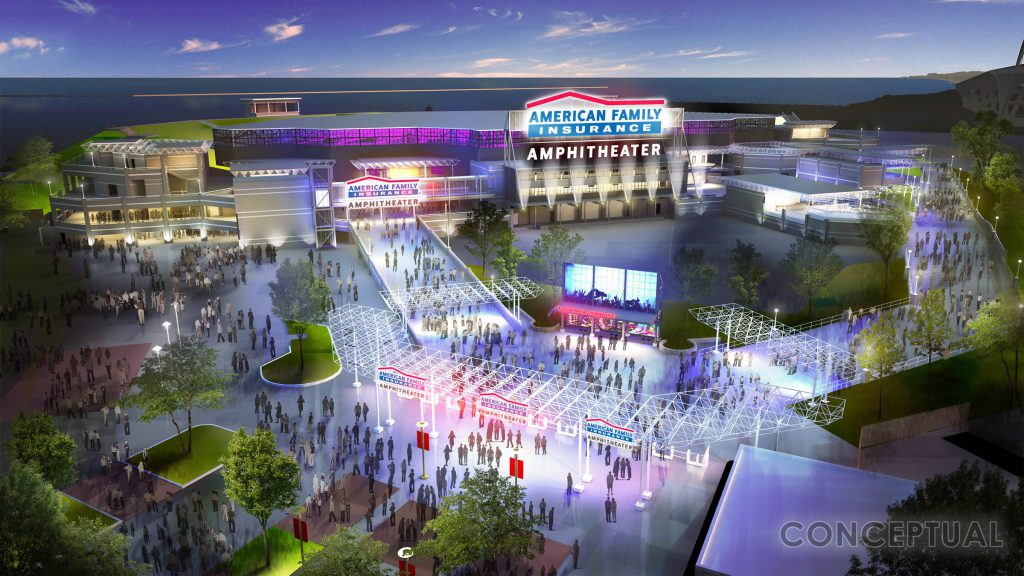 MILWAUKEE (January 26, 2017) – Milwaukee World Festival, Inc. officials are excited to announce a new, comprehensive sponsorship with American Family Insurance that will strategically align both brands into the next decade and beyond through a naming rights partnership. With this agreement, American Family Insurance will become the first presenting sponsor in the history of Summerfest. Milwaukee World Festival, Inc. is especially proud to announce this historic partnership with a leading Wisconsin-based company as we celebrate the 50th Summerfest in 2017.

The components of the sponsorship, which takes effect immediately, include:

“In 2017, American Family will celebrate its 90th anniversary and Summerfest its 50th, so we’re thrilled to announce this partnership during such a historic year for both our organizations,” said American Family Insurance Chairman, Chief Executive Officer and President Jack Salzwedel. “This partnership with Summerfest not only allows us to raise awareness and effectively market our brand to a large and enthusiastic audience, but gives us the opportunity to support a popular and enduring community event our customers from Wisconsin, and all parts of the country, look forward to each year.”

Regarding the sponsorship, Don Smiley, president and chief executive officer of Milwaukee World Festival, Inc. stated, “This is a transformational partnership for Summerfest and Henry Maier Festival Park. American Family Insurance’s commitment will ensure that our festival continues the legacy of hosting the world’s most renowned entertainers. We could not be more excited to join with American Family Insurance and, together, step boldly into the future.”

American Family Insurance’s commitment is perfectly timed given Summerfest is preparing for its 50th edition of the festival in 2017. “As a festival we rely on major corporate support to remain an affordable community celebration.  American Family Insurance’s leadership provides the essential financial support for Summerfest to move into the next 50 years,” Smiley said.

Milwaukee World Festival, Inc. chairman Ted Kellner stated, “I have been an active member of the board for 36 of the festival’s 50 years, having served as chairman for 9 years. With that perspective, I can say with certainty that the civic mission of Summerfest is preserved through this new partnership. We are exceptionally excited for the future of the festival, the Amphitheater, Henry Maier Festival Park and the Milwaukee community.”

Stephen H. Marcus stepped forward in the 1980s to provide critical funding to build the Marcus Amphitheater.  The facility has served Summerfest for 29 years and has hosted some of the world’s biggest names in music, including Paul McCartney, the Rolling Stones, Stevie Wonder, Bruno Mars, Cher, Britney Spears and Kenny Chesney.  Millions of fans have enjoyed concerts at the facility and the building is an important component in the festival’s overall contribution of $187 million annually to the Milwaukee regional economy.

“As an organization, we have tremendous gratitude for the Marcus family’s civic leadership and commitment to Summerfest, Henry Maier Festival Park and Milwaukee. Steve’s willingness to support us 30 years ago forever changed the course of the festival, allowing Summerfest to become The World’s Largest Music Festival,” said Kellner.

In addition to the conceptual ideas presented today, more renderings and additional details surrounding the project timelines will be revealed at a later date.  All capital projects are subject to the approval of the Board of Harbor Commissioners. 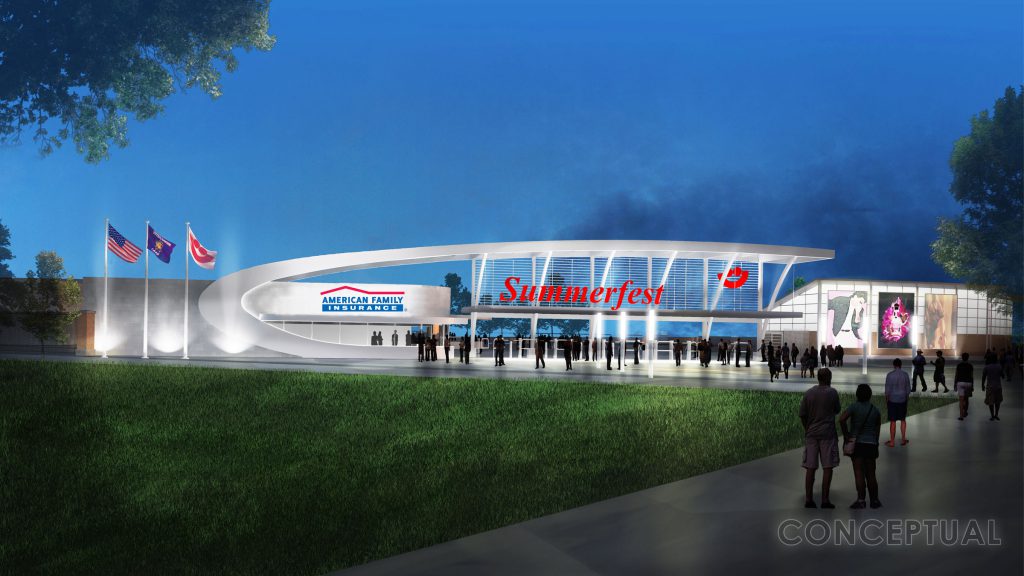 Madison, Wis. – based American Family Insurance, celebrating its 90th anniversary in 2017, is the nation’s 13th-largest property/casualty insurance group and ranks No. 332 on the Fortune 500 list. American Family Insurance is the largest insurer of homes and private passenger vehicles in the state of Wisconsin. The company sells American Family-brand products, including auto, homeowners, life, business and farm/ranch insurance, through its exclusive agents in 19 states. American Family affiliates (The General, Homesite and AssureStart) also provide options for consumers who want to manage their insurance matters directly over the Internet or by phone. Web www.amfam.com; Facebook www.facebook.com/amfam; Twitter www.twitter.com/amfam; Google+ plus.google.com/+amfam/.

Summerfest 2017 – the festival’s 50th edition – will take place June 28 – July 2 and July 4 – July 9 from noon until midnight and will be closed Monday, July 3.  Following its 1968 debut, Summerfest has evolved into what is now recognized as “The World’s Largest Music Festival” and Milwaukee’s cornerstone summer celebration, hosting he music industry’s hottest stars, emerging talent and local favorites along with approximately 850,000 people from Milwaukee and around the world each year for an unforgettable live music experience.  During the festival, the spotlight shines on over 800 acts, over 1,000 performances, 11 stages, delectable food and beverages and interactive activities, all in a world-class festival setting.  For more details, visit Summerfest.com, Facebook.com/summerfest or Twitter: @Summerfest.