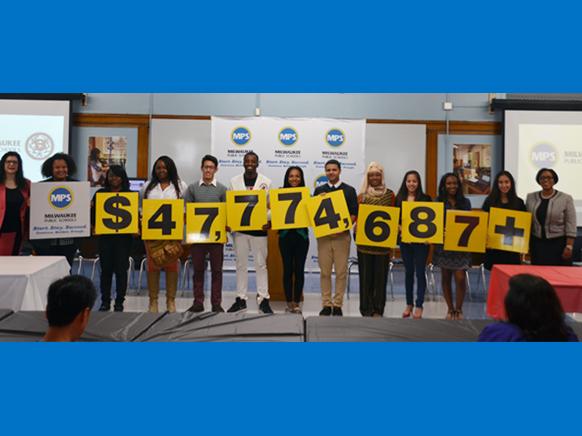 MILWAUKEE (June 15, 2016) – The Milwaukee Public Schools Class of 2016 has earned a record-breaking $47.8 million in scholarships, the district announced Wednesday, shattering the $39.3 million record set by the Class of 2015. The total will continue to grow as more scholarships are awarded.

“This record is more than just numbers. Scholarships are unlocking the doors of education beyond high school for our students, whether they are attending a two- or four-year college,” MPS Superintendent Dr. Darienne Driver said. “Congratulations to the students, their families, school counselors, educators, support staff and administrators.”

Scholarships are especially critical given that more than 80% of MPS students are considered economically disadvantaged.

This is the fourth straight year MPS graduates have set a new scholarship record. This year’s total nearly is nearly triple the $17 million earned by the Class of 2012.

Growing scholarships and better preparing all students for success in college, career and life is critical to MPS’ eight Strategic Objectives, which include Rethinking High Schools. The district has already grown the number of high school students taking college-level Advanced Placement and International Baccalaureate courses by 25% over the past two years.