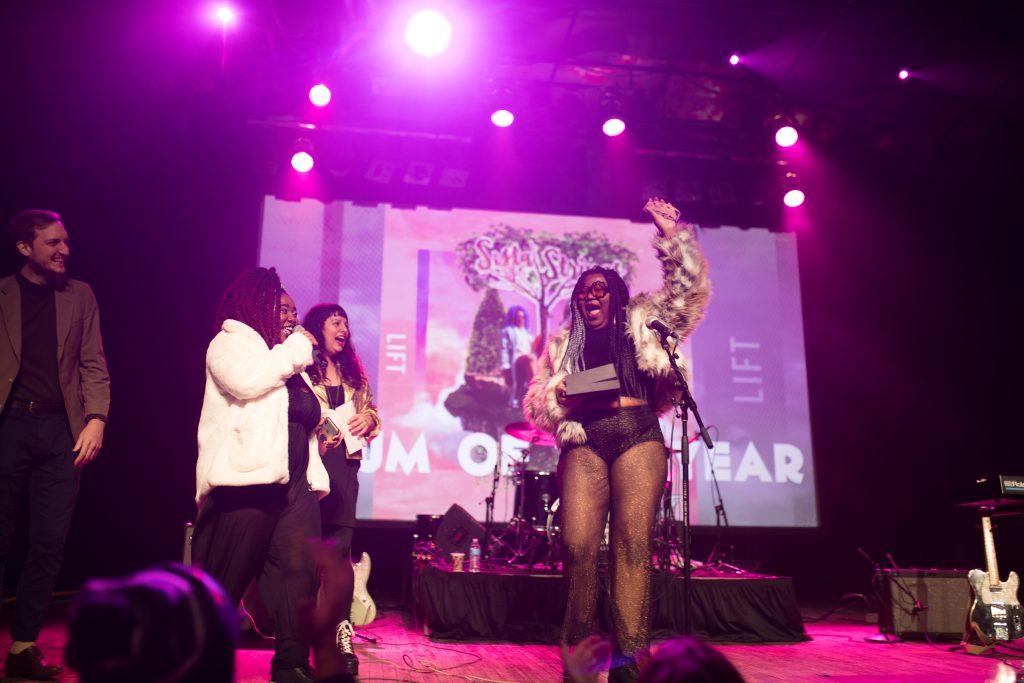 Justin Barney and Ayisha Jaffer of 88Nine and Monique and Chauntee Ross of SistaStings. SistaStrings took home awards for Album of the Year for album “Lift” and Band of the Year. Photo courtes of 88Nine Radio Milwaukee.

The top award winners were SistaStrings and Klassik, who each won two awards.

SistaStrings, made up of sisters Monique and Chauntee Ross, took home Best Band and Best Album. The groundbreaking duo’s members are black classical string musicians and vocalists who uniquely combine classical, gospel, soul and other genres.

“This year’s awards reflect the strong avant-garde sound that is developing here in Milwaukee,” 88Nine Program Director Jordan Lee said. “It’s really hard to put the music of Klassik, SistaStrings or Browns Crew in a genre box. These new sounds are defining the sound of our city in an exciting and inspiring way.”

The awards were announced Saturday at Turner Hall Ballroom at ceremonies that featured performances by musicians in the 2019 Backline program – Bravo, Immortal Girlfriend, Kaylee Crossfire, Klassik, Reyna and WebsterX.

Launched in 2018 by Radio Milwaukee and the business accelerator gener8tor, Backline provided six bands and musicians this year with 12-week intensive mentorships and $20,000 grants to further their careers and help win recognition for Milwaukee as a thriving music city. Information on Backline is at https://backlinemusic.com/milwaukee.

The 2019 Radio Milwaukee Music Awards were presented by Planned Parenthood of Wisconsin and VISIT Milwaukee.