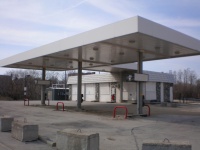 This was the third of four meetings being held to discuss Mandel Group's proposed UWM resident hall that would be located on the former Hometown gas station site.