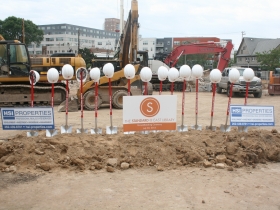 Martin Collins‘ retirement left the Department of Neighborhood Services with a significant leadership gap. Art Dahlberg, from Richmond, VA has been tabbed as the person to replace Mr. Collins as the Commissioner of Neighborhood Services and clearly the committee was cautiously optimistic.  He expressed his understanding of the position he’s walking into saying that “I recognize I’m filling some very big shoes here”.  Alderman Bob Bauman asked about his philosophy regarding the demolishing of older housing stock and if he felt this was a good or bad choice.  Mr. Dahlberg indicated that it was to be used as a last resort saying “it is not a broad solution, it is a fine tool that we have to use”.  The committee approved his appointment and it will now go before the full Common Council. Another item of note was the potential city land sale of 3427-3429 West Villard Avenue.  This land sale would allow the Northwest Side Community Development Corporation to move forward on a four-story mixed use development that would include the Villard Library moving in to the first floor of the new building.  In addition to the library the upper floors would include 47 affordable housing units targeted at “grandfamilies”.  The project will be developed by Gorman & Company utilizing low-income housing tax credits and new market tax credits.  This item was approved and will now go before the full Common Council.

This meeting included three highly debated resolutions, the “Wheel Tax”, the 9to5 direct legislation regarding sick pay, the water sale to New Berlin and the retirement of one of the most highly respected government officials.  Marty Collins the outgoing Commissioner of the Department of Neighborhood Services gave a heartfelt farewell speech stating “I’m proud to be a public servant”.  Then he left with some suggestions and encouraged the Common Council and city staff to promote creativity to find solutions.When the resolution known as the “Wheel Tax” came up for discussion Alderman Jim Witkowiak offered an amendment that would cap the fee at $20 for the duration of the current Common Council.  Although Alderman Michael Murphy explained that this amendment wasn’t meaningful because it could simply be overridden with a resolution in the future.  Another amendment was offered by Alderman Joe Dudzik that would allow a portion of the vehicle registration fee to support street maintenance.  Again it was suggested that this amendment had little value because it will be up to the budgetary process to determine that actual spending.  Both of these amendments and the overall resolution passed with a veto proof majority and will no go to the Mayor for action.Another hot button resolution was the piece of direct legislation brought forward by the group 9to5, National Association of Women by obtaining 42,000 signatures in sixty days.  The intention of the resolution is to force employers within the City of Milwaukee to give all employees paid sick time.  Alderman Bob Donovan spoke out against the resolution saying that “this resolution may end up hurting the very same people it is intended to help”.  Alderman Jim Bohl also expressed his concerns that this would resolution hurt business and that “if jobs leave this community there are no benefits to be had”.  The Common Council had two options regarding this resolution, either adopt it immediately without changes or let it go to binding referendum.  The Common Council voted to let it go to referendum.The most hotly debated issue of the day was the proposed water sale and the associated intergovernmental agreement with New Berlin.  Alderman Robert Bauman initially questioned the legality of the water sale saying that his concerns were “beyond the question of policy” because this transaction was outside the bounds of what the Common Council had approved in December of 2007.  He questioned if the sale was proper because the original authorization to negotiate was in reference to an area of New Berlin within the current Milwaukee Metropolitan Sewerage District (“MMSD”) service area while this transaction included a portion of New Berlin that is planned to be in the MMSD service area sometime in the future.  Alderman Murphy agreed that “the department made a mistake without a doubt” but that the City of Milwaukee needs to move forward with this transaction or New Berlin may find another solution.The intergovernmental agreement with New Berlin included a non-compete clause and a $1.5 million payment to the City of Milwaukee.  The non-compete […]