John K. MacIver Institute of Public Policy is a business/organization . 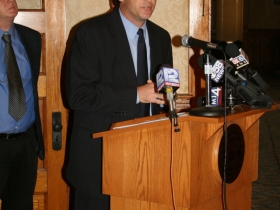 Alderman Bob Donovan will introduce an item for immediate adoption at Tuesday’s full Common Council meeting that (if approved) would require city employees to cease and desist from performing any tasks related to the downtown streetcar project until a majority of Milwaukee voters approve a referendum question asking whether they support construction of the massive public project.

Alderman Donovan to announce new efforts in fight against streetcar