Ball is the first woman to become sheriff in Milwaukee County history. 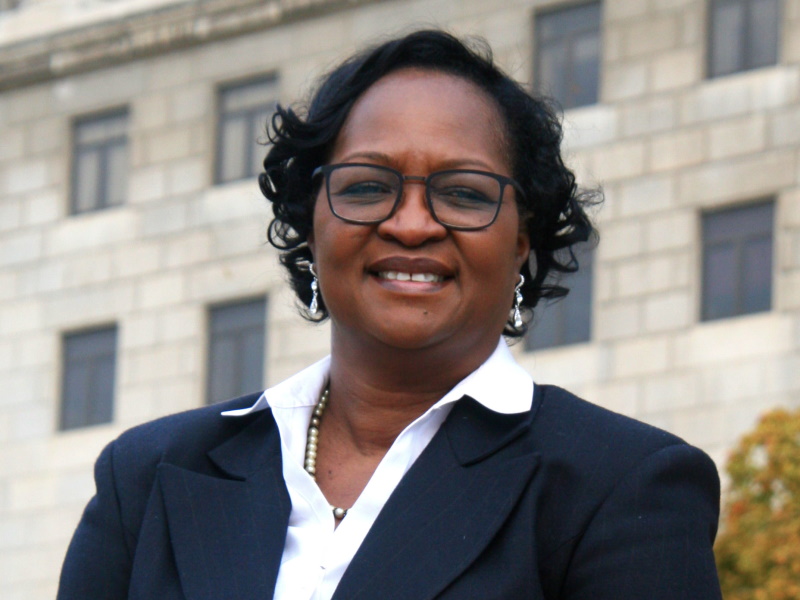 Elected on Nov. 8, Ball took an official oath of office a few weeks ago before Chief Judge Mary Triggiano, as state statute requires the new sheriff to be sworn in no more than 28 days after being elected. But she was ceremonially sworn Friday in front of family, friends, local elected officials and law enforcement officers.

After her swearing-in, Ball delivered a speech to a room packed with many of Milwaukee’s most powerful public officials, in which she repeatedly emphasized that they — as Milwaukee’s leaders — need to work together to help the public.

“The people in our county are hurting,” said Ball.

Ball served in the Milwaukee Police Department for 25 years, earning the ranks of captain and deputy inspector. She left MPD in 2010 and pursued a Ph.D. from Cardinal Stritch University — writing a dissertation on the use of deadly force by police. She later served as the head of the criminal justice program at Bryant and Stratton College, and in 2018 she joined then-sheriff Earnell Lucas‘ command staff as chief deputy.

Lucas didn’t seek re-election for sheriff and instead campaigned for mayor. He resigned in October to take a position with Fiserv, a financial technology company, and Ball was appointed sheriff by Gov. Tony Evers a few days later. Less than two weeks later, Ball was elected sheriff. She was already the lone remaining candidate after winning a Democratic primary in August.

Several dozen of her sorority sisters from Delta Sigma Theta Sorority, which Ball joined as an undergrad at the University of Arkansas, donned red to join Ball at the ceremony. Ball, a devout Christian, was also joined by a number of her fellow congregants from Providence Baptist Church.

Get a daily rundown of the top stories on Urban Milwaukee
Most of the speakers who introduced Ball mentioned the historic nature of her election and appointment as the first woman to become sheriff in the history of Milwaukee County.

Ball began her speech by thanking friends, family, colleagues and supporters. “I was sitting here, and I listen to the speakers, and the reflections on the significance of this moment, it was not lost on me the history that I am making,” Ball said. “And so, as a result of that, I want to say to God be the glory. He is the reason why I am standing here today.”

“I believe I have a mission and a purpose,” she said. “This is not an easy job whether it be for a man or a woman, but I know that God placed me here and I know that he has great things in store for Milwaukee County under my leadership.”

The new sheriff kept returning in her speech to the idea that Milwaukee’s leaders, many of them sitting in the room, need to step out of their silos and better work together to serve the  “We need to work together, not to meet so we can meet and meet again,” Ball said. “When we meet, it should be for a purpose, and there should be some action behind it.”

Ball noted that Milwaukee just experienced another record-breaking year for violent crime, with more than 200 homicides in the city of Milwaukee in 2022. “Do we want the same thing to happen this year?”

“There are people out there that need us,” Ball said. “And law enforcement has a role. We don’t have the only role.”

Ball said she wants to work with elected officials to “make sure that we get what we need to make the county safe.”

“I work want to work with our community groups because they have some good ideas, they’re doing great things but some of them are small in numbers,” she said. “Can you imagine what we could do if we all came together?”

Ball said she wanted to “pin a flower” on Lucas, adding that she is “forever grateful” to him for bringing her in. “But now is my time,” she said. “I say that — not because I’m trying to be puffed up or anything like that — it is my time.” She said her run for sheriff was not just “to check a box.” adding, “I am here to roll up my sleeves and I am here to do the work.”

The sheriff might not be the only elected official in her house soon. Her husband of 33 years, Odell, is running for alderman in an eight-way race.